Sharmishtha Mukherjee and last poll’s Kasana deny they are in fray, 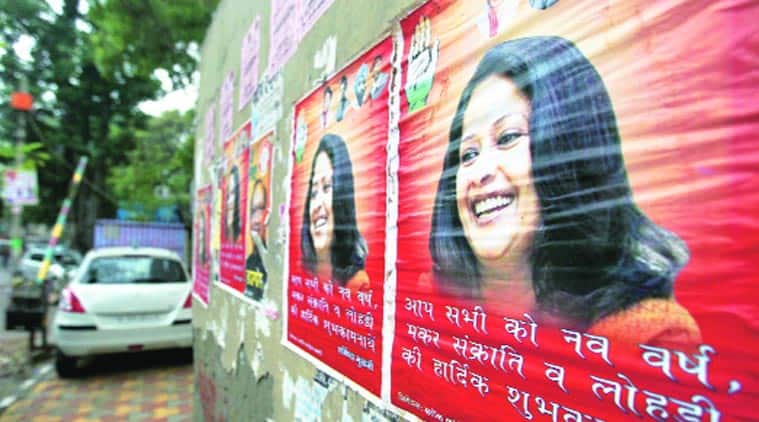 The date for an election in Delhi hasn’t yet been announced but for Congress a political contest, one being fought with posters of “festival greetings”, has already begun in the Greater Kailash Assembly segment.

Sharmishtha Mukherjee, daughter of President Pranab Mukherjee, is actively campaigning for the party in the Assembly seat, but many in the party’s old guard aren’t impressed. While Mukherjee’s posters, conveying New Year’s and Lohri greetings to the constituents, are prominently displayed in GK, party sources indicate these posters have often been “torn off” and “replaced by posters carrying the greetings of the old guard”.

Talking about elections in the Assembly, Mukherjee said, “I have been meeting various people in Greater Kailash and the reception has been excellent. Irrespective of who contests from the seat, I will do everything that I can to ensure the party wins this seat.” Asked about the alleged poster war, she said, “I don’t think it is deliberate. It could be a mistake. No senior or serious leader would do something which is so juvenile and petty. So I would overlook it. I want to do constructive politics.”

Mukherjee’s posters have been put up periodically since Diwali. But since they show only her, alongside Congress president Sonia Gandhi, vice-president Rahul Gandhi, DPCC president Arvinder Singh Lovely and former New Delhi MP Ajay Maken — the local party leadership is reportedly irked. “There have been more than one occasion of Congress workers arguing about poster locations and positioning. Usually, such arguments are between different parties. For the first time, such arguments are taking place between Congress workers,” a senior Congress leader said.

Mukherjee’s foray into politics has irked the former Congress candidate from the seat, Virender Kasana. Kasana, who is said to be close to Maken, finished third at the seat in 2013, managing to poll merely 19,714 votes.

Party insiders said that for every single poster that Mukherjee had put up, older Congress leaders — who wished to see Kasana fight elections again — put up three. The result is that the Greater Kailash Assembly seat is awash with Congress posters. A senior leader commented, “Everyone from the Congress in the area has somehow managed to get their face on a poster. It is bizarre.”

But Kasana denied any knowledge of such a “poster war’ and confirmed that he will not contest elections. “My daughter is getting married and I am very busy with that. As a result, I won’t be contesting. In all likelihood, Sharmishtha Mukherjee will be contesting and I will support her in any way that I can,” he said.