Politics and elections: Survey of 761 DU students reveals what the youth know, want

The survey was conducted between January 16 and 20 among 761 students of Delhi University and affiliated colleges in the age group of 18-34. January 25 is observed as National Voters’ Day in the country. About the next Lok Sabha election schedule, seven out of ten knew that the next national elections will be held in 2024. (Express File)
Listen to this article
Politics and elections: Survey of 761 DU students reveals what the youth know, want
x
00:00
1x 1.5x 1.8x

Not enough youth registered to vote, a preference for EVMs over ballot paper, and a belief that there should be a retirement age for politicians as well as minimum educational qualification to contest the polls. These are some of the findings of the ‘Young Voters’ Awareness and Opinion Survey 2023’ conducted by the Lokniti programme of the Centre for the Study of Developing Societies (CSDS), Delhi.

The survey was conducted between January 16 and 20 among 761 students of Delhi University and affiliated colleges in the age group of 18-34. January 25 is observed as National Voters’ Day in the country.

In the survey, 55% of the surveyed students were registered as voters. However, we found that more young men were enrolled in the voter list than women (table 2). It was also observed that the 18-19 year-olds and undergraduates were less likely to be registered voters as compared to older students.

Another important finding was that seven of 10 Delhi University students who were surveyed were registered in the voter list of other states.

Of those who hadn’t yet enrolled as voters, a little over half (53%) said that they could not register because they did not get time but 12% said that procedural hurdles prevented them from registering (table 3). However, one in ten also said they were not interested in voting. When the youth were asked whether they supported fixing a retirement age for politicians in India, three in four were in support of the measure (table 6). The support was higher among students who are pursuing higher degrees than undergraduates. Further, students studying arts and humanities followed by science students were more likely to support the retirement age for politicians as compared to commerce students. 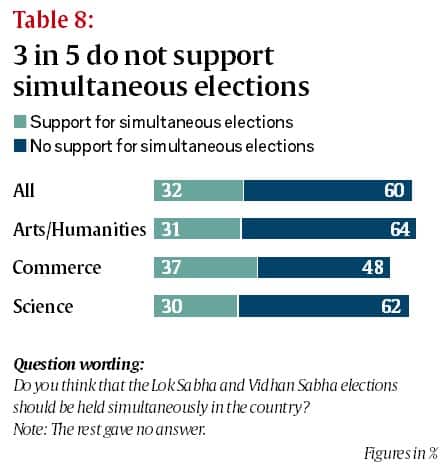 Another heated debate surrounding elections has been on the One Nation One Election, which suggests that Lok Sabha and Vidhan Sabha elections should be held at the same time. When students were asked to share their opinion on this issue, three in five said that there is no need to conduct simultaneous elections.

The youth were asked which qualities they find most impressive about prominent Indian political leaders. Asked about Prime Minister Narendra Modi, 16% said they liked his oratory skills and 15% liked him because of his policies. One in ten called him a charismatic leader (table 9), while 17% could not name an attribute they liked about the PM.

When asked about Congress leader Rahul Gandhi, one in three (35%) said they don’t like anything about him. Of those who do like Rahul, 13% said they like him because of his secular and inclusive ideology. One in ten said they found his level of determination praiseworthy and a similar proportion listed his hardworking nature.

Apart from the two, Delhi Chief Minister Arvind Kejriwal emerged as the most liked leader among Delhi University students. When students were asked to name a leader whom they liked the most other than Modi and Rahul, 19% named Kejriwal. On the other hand, 9% said they liked Uttar Pradesh CM Yogi Adityanath and 7% named BJP leader Nitin Gadkari.

The names of Foreign Minister S Jaishankar and Home Minister Amit Shah were each mentioned by 4% of respondents. Among Congress leaders, 5% named MP Shashi Tharoor (table 11).

A team of five research assistants of Lokniti-CSDS – Aryan Pandey, Rishikesh Yadav, Riya Choudhary, Jyoti and Ritik Kumar conducted the fieldwork. A random sampling method was for conducting face-to-face interviews using Google Forms. The questionnaire for the survey was in English and Hindi. It took around 10 minutes to complete each interview. The Lokniti team which coordinated and analysed the data constituted of Jyoti Mishra, Himanshu Kapoor, Vibha Attri, Himanshu Bhattacharya, Anuradha Singh, Aaliyia Malik, Nishtha Gupta and Dhananjay Kumar Singh. The study was directed by Sanjay Kumar, Suhas Palshikar and Sandeep Shastri.

At Home with L-G V K Saxena, with a visit by Arvind Kejriwal to ‘mark attendance’