Not quite home sweet home: At DDA flats for slum dwellers, some problems

This is a far cry from the promise of “vitrified floor tiles, ceramics tiles and Udaipur green marble counters in the kitchen” that figured in a statement by the Prime Minister’s Office last November. 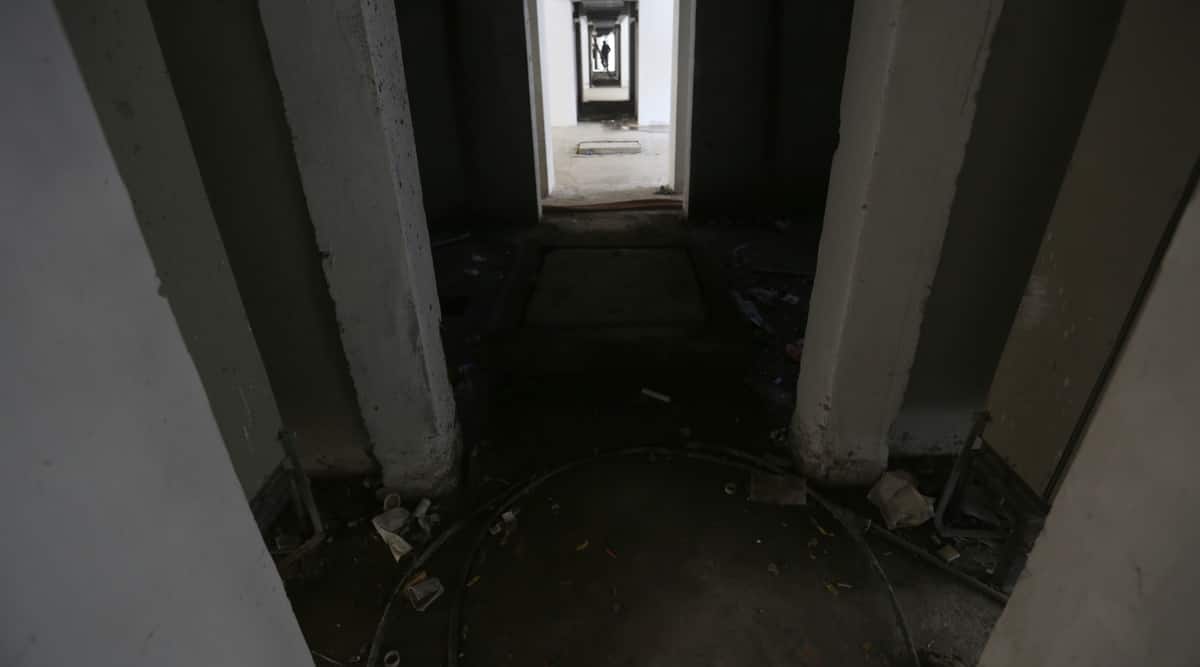 Debris could be seen lying haphazardly in hallways. (Express Photo by Gajendra Yadav)
Listen to this article
Not quite home sweet home: At DDA flats for slum dwellers, some problems
x
00:00
1x 1.5x 1.8x

Less than three months after keys to 575 flats were handed over to slum dwellers in Kalkaji — as part of the Centre’s in-situ slum rehabilitation scheme called ‘jahan jhuggi wahan makaan’ — new homeowners are complaining of issues such as seepage, cracked tiles, broken pipes and windows, and chipping cement.

This is a far cry from the promise of “vitrified floor tiles, ceramics tiles and Udaipur green marble counters in the kitchen” that figured in a statement by the Prime Minister’s Office last November.

Water was seeping down the walls of some flats. (Express Photo by Gajendra Yadav)

So far, three blocks — A, B and C — have been thrown open to new occupants. The Indian Express visited the three blocks to find several dissatisfied residents, with water seeping down the walls of some flats, and visible cracks in places. In some places, murky water ran down broken pipes, drizzling on those walking below.

The complex’s maintenance and cleanliness were also questionable as debris could be seen lying haphazardly in hallways and stairs, near lifts and doors.

Arjun Roy (31), who was handed over the keys to flat 1030 in A block, said tiles in his flat were broken, and despite raising a complaint with the Delhi Development Authority (DDA) 20 days ago, no one had visited them so far.

Mithun Das (34), who has been given the keys to flat 402 in B block, said a plumber who had come to fix his shower went away, claiming that he did not have the tools to fix it. “These problems are not endemic to one floor, many acquaintances of mine have reported the same issues — broken panes, bathroom leaks, damp ceilings and walls. If this is the condition before moving in, how will we live here,” he said. “We are compelled to shift by January 25. The authority said they will seal the flat if we can’t make it before the deadline. There are more than five members in many families, how will they live in such crammed flats with one bedroom along with all these issues. If the flat is not fit for living in, what can we do?” he claimed.

One of the residents of a flat in C block, Anjuman Mishra (29), said tiles in their bathroom were chipped and one of the windows was broken. “We sent a complaint two days ago,” said Anjuman, while overseeing renovation in her 1BHK flat. Her family is yet to move in.

The flats have been offered at subsidised rates to residents of Bhoomiheen camp, a slum cluster nearby. Geeta Das (42) said the quality of the window panes, tiles and the paint were subpar, forcing her to spend over Rs 30,000. “The flat costs Rs 1,47,000, and I am spending more on top of it. People here are not well off enough to shell out for repair work that the DDA doesn’t cover. Some paid for the flats by taking out loans at a 12% interest rate.”

She said there were talks on getting an RWA registered for the complex to help deal with grievances better.

When contacted, the DDA said: “DDA has constructed good quality accommodation. The allottees are presently customising their flats as per their needs. There have been instances of issues developing as a consequence. DDA already has a grievance redressal mechanism on site. To further augment its response to these issues, an engineer has been placed at site. DDA is also currently helping the allottees to shift into their flats by providing transportation for their personal effects.”

Aiswarya RajAiswarya is a sub-editor at The Indian Express. She reports from Delhi... read more