A Delhi Police head constable was among the 13 killed in the violence that erupted in Northeast Delhi for the second consecutive day on Monday over the amended citizenship law.

Amid unabated violence over the Citizenship Amendment Act (CAA) in Northeast Delhi, the Jaffrabad road, where an anti-CAA protest sit-in was on, was cleared by the Delhi Police on Tuesday. In Chand bagh, fresh incidents of arson and stone-pelting were reported this evening despite the imposition of section 144.

As the death toll climbed to 13,  a shoot-at-sight order was issued in some parts of Northeast Delhi. The Central Board of Secondary Education also postponed the board exams for Class 10 and 12 scheduled on Wednesday in violence-affected areas. Both private and government schools will also continue to remain close.

Violent mobs torched vehicles, homes, and shops in northeast Delhi, particularly in the areas of Maujpur, Kardampuri, Chand Bagh and Dayalpur. The area has been on edge since Sunday when a rally by BJP’s Kapil Mishra to counter anti-CAA protests in the area had been followed by waves of stone-pelting.

Chief Minister Arvind Kejriwal Tuesday appealed everyone to maintain peace. Calling the situation “unfortunate,” Kejriwal said the district magistrate has been asked to take out peace march with the police. He also appealed all temples and mosques in affected areas to maintain peace. The chief minister also met Home Minister Amit Shah to discuss the situation.  See pics from Maujpur-Babarpur clashes

The court will further hear the petition Wednesday afternoon. Earlier, a forum, consisting of doctors from various government and private hospitals moved Delhi HC late night for police protection while their ambulances head towards providing medical facilities to the people injured in violence at Mustafabad area in the capital.

#Delhi violence; Police tells a bench headed by Justice S Muralidhar of the Delhi HC that they have shifted 20 injured from the hospital in Mustafabad to other medical institution. Hearing concludes & the court will further hear the petition Wednesday afternoon @IndianExpress

AAP: Ambulances to reach Al-Hind hospital, patients waiting to be shifted to other hospitals

Delhi Govt's ambulances will be reaching shortly at Al-Hind hospital in Mustafabad where many injured patients are waiting to be shifted to other hospitals. @hajimyunus and @ShaleenMitra struggled a lot so that the ambulances could reach to the injured victims. https://t.co/FP0vRSRibS

A bench headed by Justice S Muralidhar of Delhi High Court is hearing the plea of the forum, which stated that their ambulances are not allowed to the riots affected area where gunshots injured are waiting for help. The forum, consisting of doctors from various govt and private hospitals, moved Delhi HC late night for police protection while their ambulances head towards providing medical facilities to the people injured in violence at Mustafabad area in the capital.

#Delhi violence; a bench headed by Justice S Muralidhar of Delhi HC is hearing the plea of forum, which stated that they their ambulances are not allowed to the riots affected area where gunshots injured are waiting for help @IndianExpress

Strongly condemning the violence that has claimed 13 lives in the national capital, Delhi BJP president Manoj Tiwari appealed to all the party leaders to work towards establishing peace.

The Editors Guild of India has condemned the attack on journalist during the Delhi violence on Tuesday. The statement comes after a journalist with JK 24X7 news received a bullet injury and two reporters from NDTV were beaten and punched by rioters in northeast Delhi, wracked by fresh violence on Tuesday. The Guild urged the Delhi Police to take necessary steps to provide protection to the journalist and prevent any such attack. 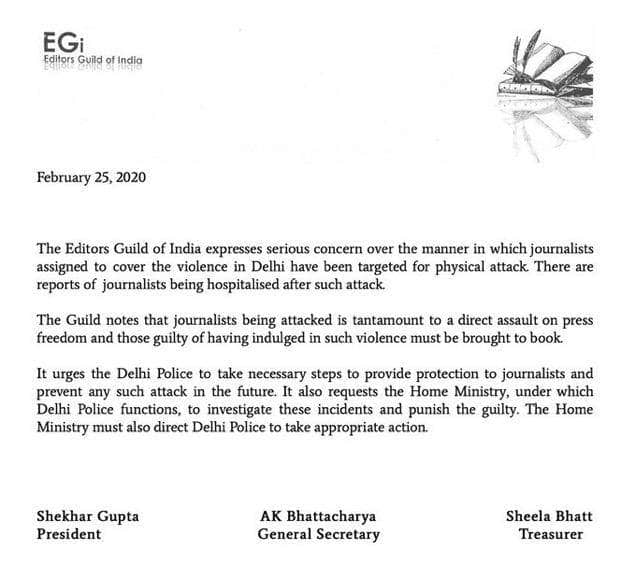 Shocked & concerned about the #DelhiViolence. Urge @AmitShah and @ArvindKejriwal to sit together and resolve the crisis immediately to prevent the situation from escalating further in the larger interest of the national capital & the country.

I request all residents not to post any wrong WhatsApp message. There is also the work of spreading rumours in many places. Unless you see an incident happening with your eyes, neither believe such things nor send such WhatsApp messages to anyone. The greatest contribution at such critical times is not to spread rumours. Use your discretion and patience at this time.

Congress Working Committee (CWC) to meet at 10 AM on February 26, 2020, tomorrow at All India Congress Committee headquarters in New Delhi.

Only those who say ‘Bharat Mata ki Jai’ will stay in India: Himachal CM on Delhi violence

'I did not commit crime by supporting CAA': Defiant BJP leader Mishra

Facing flak for his speech during a gathering in favour of CAA at Maujpur Chowk in northeast Delhi, BJP leader Kapil Mishra remained defiant on Tuesday saying he was not scared of the "massive hate campaign" against him for "speaking truth" and supporting the amended citizenship law. In a series of tweets on Tuesday, Mishra said that he was being abused and issued "death threats" and stressed that he did not commit any crime by supporting the amended citizenship law. "I have received calls by many to kill me. Many people including politicians and journalists are abusing me. But, I am not scared because I have not done anything wrong," Mishra told PTI. During his pro-CAA demonstration at Maujpur Chow, Mishra had also issued an ultimatum to police to vacate the roads blocked by anti-CAA protesters in Jafarabad and Bhahanpura areas in three days, warning that he will come back on the streets if no action was taken.

The death toll in the violence climbed to thirteen and nearly 150 injured were admitted to the GTB hospital. Affected areas include Maujpur, Jaffrabad, Bhajanpura, Yamuna Vihar, Chand Bagh and Gokalpuri in Northeast Delhi.

The Delhi Minorities Commission on Tuesday appealed to Lieutenant Governor Anil Baijal for imposition of curfew in violence-affected areas, after 11 people were killed in clashes and arson over the new citizenship law. In a letter to Baijal, DMC chairman Zafarul Islam Khan expressed apprehension that violence may escalate after departure of the visiting US president Donald Trump.  "The situation may worsen tomorrow after President Trump leaves tonight. Please treat this as urgent as any delay will result in more loss of lives and damage," Khan said in his letter demanding imposition of curfew in the violence-hit areas. 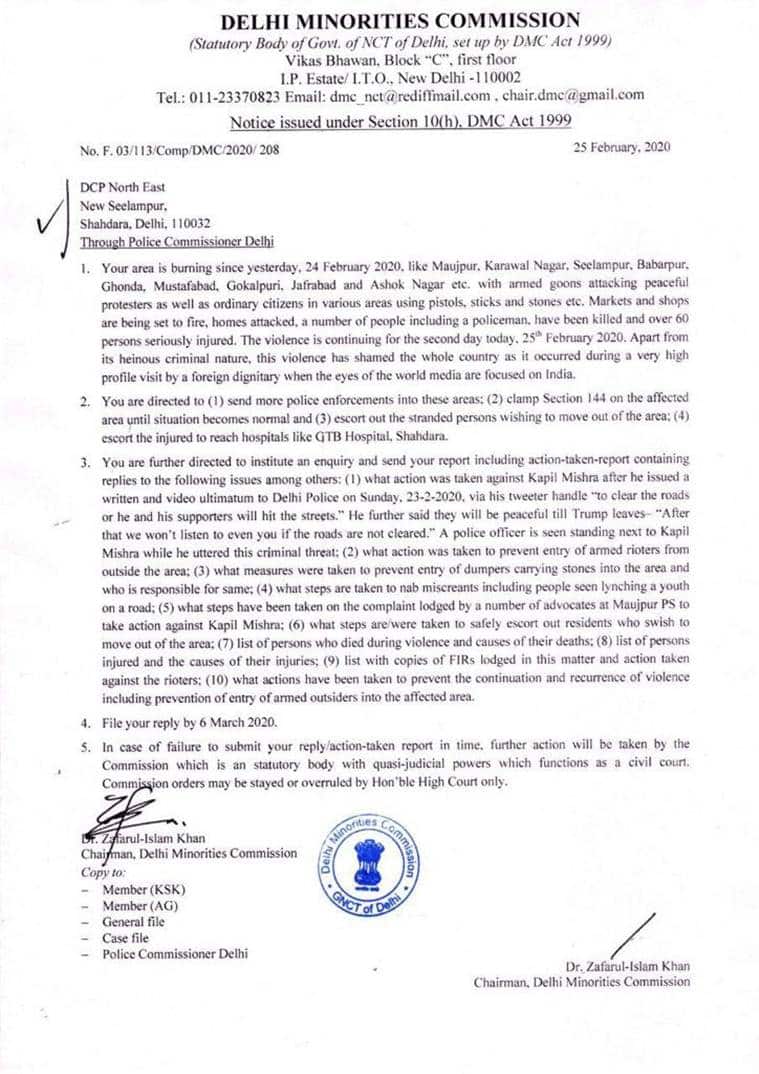 JUST IN: CBSE reschedules Board Exams scheduled on Feb 26 across 86 test centres in NE Delhi in wake of riots in the area @IndianExpress pic.twitter.com/hhjZBaw0cj

As violence continues in areas of Northeast Delhi, shoot at site order has been issued.  As of now, the death toll has climbed to 11 #JUSTIN: Shoot at sight order issued in some areas of North-East Delhi. @IndianExpress, @ieDelhi pic.twitter.com/2pgqF0Y1A2— Mahender Singh (@mahendermanral) February 25, 2020

After fresh incidents of stone-pelting were reported in Chand Bagh, death toll in Delhi northeast violence rose to 11.

#JUSTIN: Jafrabad road in North-East Delhi where an anti-CAA protest sit-in was on, has been cleared by the @DelhiPolice. @IndianExpress, @ieDelhi pic.twitter.com/ECGS01R6C6

In wake of unabated violence, schools in northeast Delhi to be remained closed tomorrow as well.

In wake of violence over CAA protest in the national capital, Delhi High Court on Tuesday asked CBSE to decide at the earliest on rescheduling Wednesday's board exam at one of the centres in the north-east Delhi. The court will hear the matter again on Wednesday morning. The court was hearing a plea by private school, Bhai Parmanand Vidya Mandir at Surya Niketan in East Delhi, and some of its class X and XII students saying the centre allotted to them by the CBSE was 16 km away their school and situated in Chandu Nagar-Karawal Nagar road, one of the violence-hit areas.

Fresh incidents of violence have been reported from Northeast Delhi's Chandbagh area. Despite sec 144, rioters set afire shops and pelted stones this evening.  The police used tear gas to disperse the crowd in the area but to no avail. Paramilitary forces have also been deployed to bring the situation under control.    (Photo: ANI) 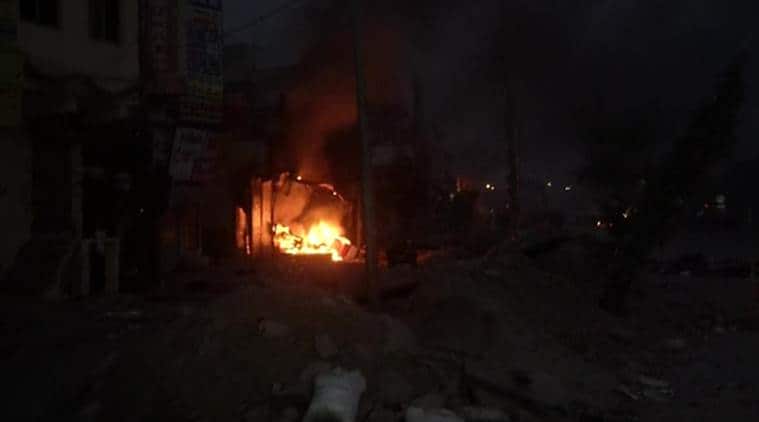 Four people, including a Delhi Police Head Constable, were killed and many others injured in northeast Delhi Monday as violence over Citizenship Amendment Act protests raged on for the second consecutive day. Vehicles were burnt, homes and shops set ablaze, and stones pelted in Maujpur. Incidents of violence and arson were reported in Kardampuri, Chand Bagh and Dayalpur too.

One man, identified as 33-year-old Shahrukh, has been detained for allegedly firing eight rounds in Maujpur’s 66 Foota Road. Two of the deceased have been identified — Head Constable Ratanlal and a civilian, Mohd Furqaan. At least 37 police personnel, including DCP Shahdara, were injured. All of them have been taken to GTB hospital.

Sources in the Home Ministry said the violence “appears to be orchestrated to coincide with the visit of US President Donald Trump”. Union Home secretary Ajay Bhalla said senior officials were on the ground and sufficient forces had been deployed. Trump landed in Delhi on Monday evening.