Accused, along with two others, caught by Gurgaon Police while trying to rob a man. 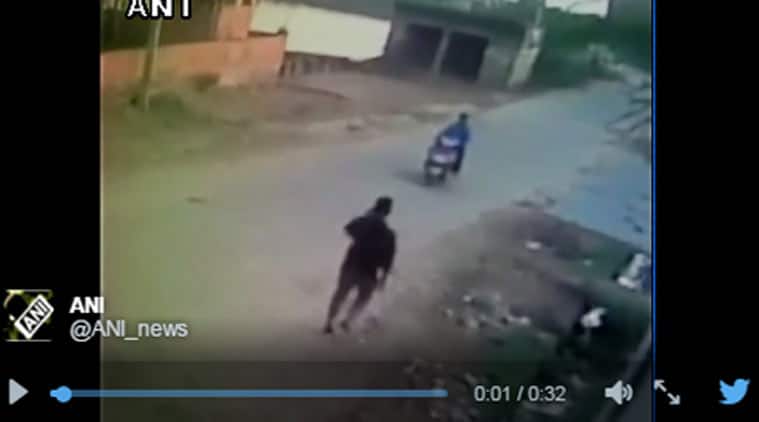 The CCTV footage shows Sukhwinder being accosted by two men on a two-wheeler. The pillion rider first shoots him. Sukhwinder falls to the ground after a bullet hits him in the chest. The duo then shoot him in the head.

Five days after a national-level kabaddi player was shot dead in Rohtak’s Rithal village, the Gurgaon Police Monday arrested three people in connection with the murder. The incident was captured by a CCTV camera installed at a nearby house.

The accused were produced in the district court Monday and have been taken into police remand for further questioning, said a police officer.

In the CCTV footage seized by police, Sukhwinder (24) can be seen walking along a road while speaking on his cellphone when he is accosted by the two armed youths on a two-wheeler. The pillion rider first shoots him. Sukhwinder falls to the ground after a bullet hits him in the chest. The duo then shoot him in the head from point-blank range, and speed away.

According to sources, on March 20, crime unit-3 of Gurgaon Police in Palam Vihar received a tip-off that five men carrying weapons in a white Scorpio were heading towards new Dwarka Expressway.

Sources added that the men were seen stopping vehicles coming from New Palam Vihar towards Daulatabad in order to loot them. “Two teams were formed and immediately rushed to the spot. On reaching the spot, the teams found the assailants holding a man at gun point and forcing him out of his car,” said Balbir Singh, Deputy Commissioner of Police (Crime).

The men were nabbed and police recovered a revolver, three country-made guns and nine cartridges. All five accused have been booked under sections 401 and 398 of the IPC and under the Arms Act. Police said the accused have been identified as Rakesh alias Pappu from Panipat, Anil alias Dhaula from Jind, Anil alias Leela from Sonipat, Ankit Khatri and Parminder alias Bhola from Rohtak.

Rakesh, Anil and a third accused, Amarjit, are involved in the murder, said police. Amarjit is yet to be arrested.

“During questioning, two of the accused confessed to shooting Sukhwinder. Rakesh and Dhaula, along with their accomplices, planned the kabaddi player’s murder,” added the DCP. One of the accused told police that they had followed Sukhwinder for days to know his routine. According to police, Rakesh had some “personal rivalry” with Sukhwinder for the past nine months.

Sources also revealed that Rohtak Police had been tracing the assailants after they got some vital clues from Sukhwinder’s call detail records.

Sources also said Rakesh, Anil and Dhaula were involved in a double murder case in Panipat. Haryana. The others have been booked for various cases including murder, attempt to murder and robbery in other police stations across the state.

In odd-even phase 2, govt to monitor air quality across NCR