MCD polls: Sanitation to toilets, here’s what women voted for

Women in different parts of Delhi expressed different concerns that influenced their votes in the MCD election. 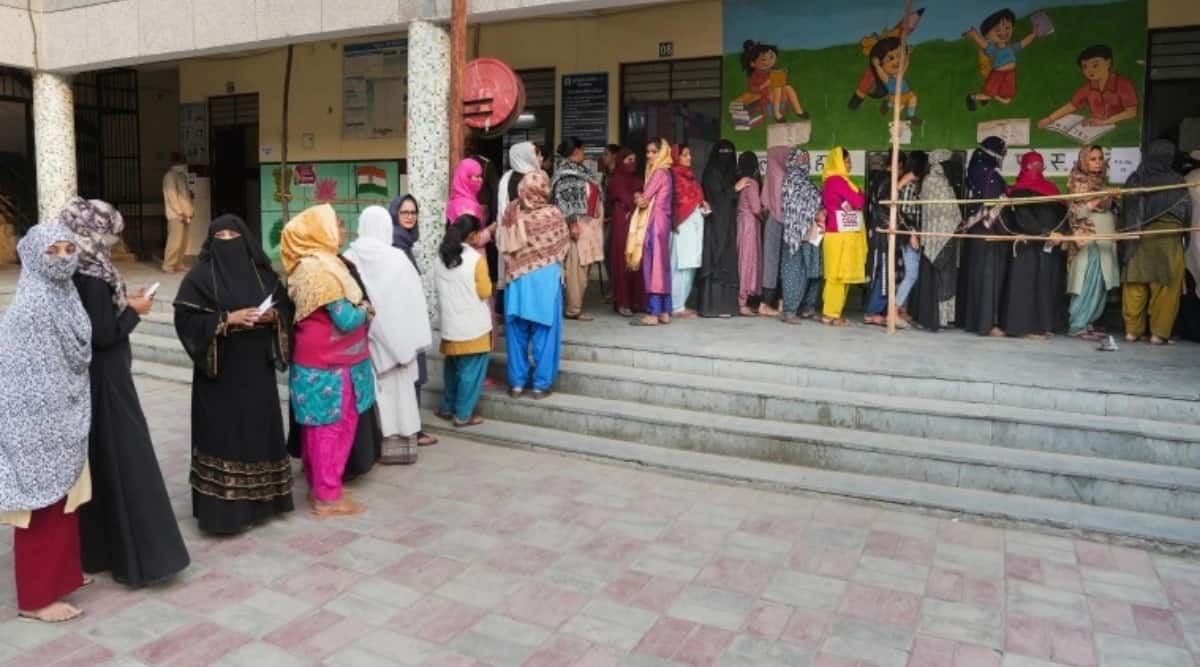 Voters wait to cast their votes for the MCD elections, at a polling station, in East Delhi, Sunday, Dec. 4, 2022. (PTI Photo)

As she walked towards the polling station on Sunday morning, Rajni Paswan, a domestic worker residing in South Delhi’s Zamrudpur, was still not sure who she should cast her vote for. At the age of 46, she was going to vote for the first time. She looked towards her son Rahul (20), who had helped her register to vote. “I think whoever comes should do good work, like the Kejriwal government. They really improved my school and made it very good. But it’s ultimately up to her to decide,” he said. “I think I’ll only make up my mind when I’m inside the booth,” she finally said.

Elsewhere, in Batla House, Hafeez Ahman (34) also helped his mother Jameela Begum (80) cast her vote. “The sewage pipelines in my lane were laid just a few days ago. But our roads are still in a pathetic state and they keep promising to widen them. We just want proper disposal of garbage and roads to be widened in our lanes,” Begum said.

Women in different parts of Delhi expressed different concerns that influenced their votes in the MCD election.

In Malviya Nagar’s Begumpur village, housewife Asha Devi (35) said she is driven by her concerns about her children. “I have a lot of expectations from the Kejriwal party, if they win. Under them, schools and hospitals have become good. For poor people’s children, they are very good — children are getting free sanitary napkins, and an English-medium education. All we want in our locality is that it be clean and that we have access to clean water. Right now, water gets accumulated in the lanes which attracts mosquitoes and makes the children fall sick. I also hope that whoever comes can think of some way for housewives like us to work and earn a little during the time that our children are in school and we are free,” she said.

For Anjali (63), a housewife from Panchsheel Park, her expectation for change is in another direction: “In the beginning, everyone was impressed by the Kejriwal government and their model of governance… They have done some good work in the education sector but things like the liquor policy and its minister getting massages in jail is a disappointment. Keeping these issues in mind, I cast my vote for change.”

Aditi (38), who works in a private office and is a resident of Preet Vihar, said she hopes the next councillor works towards more streetlights and better roads for the benefit of women travelling alone.

Rani (36), who works as part of the housekeeping staff in a Delhi government school in RK Puram, said that for women in her locality, accessibility to toilets is the most pressing issue. “I live in a camp nearby in Sector 9, RK Puram. There are many issues, especially basic amenities like water, sewerage and, most importantly, toilets. There are common toilets, but they are far across the road and are in a very bad condition. Most toilets situated on main roads are closed by 9-10 pm. Women face problems due to the lack of toilet facilities, especially when they are menstruating… I hope whoever is the next candidate will address this.”

Himanshi Batra (21), who had gone out to vote with her family, said her primary concern was safety issues in her Govindpuri locality. “The most pressing issue is the web of overhead wires in the lane. I’ve seen how much damage they can cause; we had a fire this summer because of a short circuit. Apart from that, cleanliness is a problem. And while I’m not against stray dogs, there are too many and some are dangerous.”

For many, hyperlocal issues a top concern