The FIR states that when police tried to make contact with Faizan at GTB hospital, they found he had left after treatment. As per the FIR, police have no eyewitnesses so far. 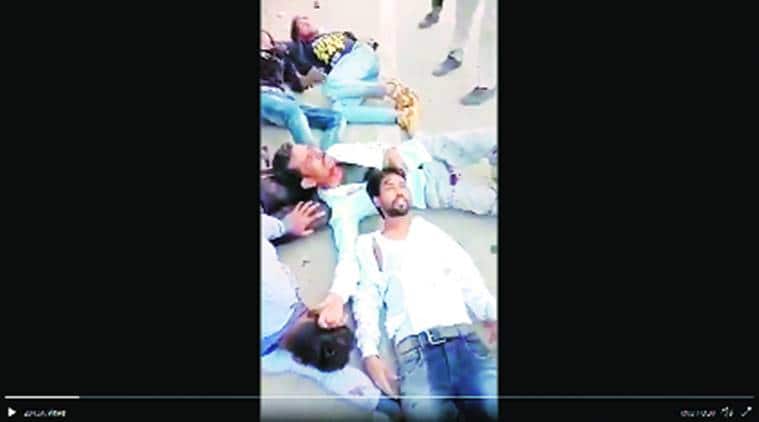 Faizan was seen lying injured in one of the videos.

The Delhi Police FIR in the death of Faizan — a 24-year-old who was filmed lying injured on the ground with four others, as men in police gear forced them to sing the national anthem and Vande Mataram during the Northeast Delhi riots — makes no mention of an accused or the videos.

At least two videos of the incident at Kardampuri were shot on February 24, and Faizan died three days later. The FIR, filed on February 28 at Bhajanpura police station by sub-inspector Rahul, states that when police tried to make contact with Faizan at GTB hospital, they found he had left after treatment. As per the FIR, police have no eyewitnesses so far.

When contacted, Delhi Police spokesperson M S Randhawa said, “The FIR has been filed in the murder case and the investigation is on.”

Vrinda Grover, lawyer for his family, alleged, “Eyewitnesses, videos and other documentary evidence discloses that on February 24, Faizan was assaulted by the police, taken to GTB hospital in a police van, and in a grievously injured condition illegally detained overnight at Jyoti Nagar police station. He was released only when his condition deteriorated severely. Two sets of policemen need to be investigated for Faizan’s murder — the police group that can be seen on video beating him, and those at Jyoti Nagar police station who denied him medical treatment…”

Faizan’s brother Wasim told The Indian Express, “My brother was beaten up on February 24, taken to GTB hospital for treatment, and then to Jyoti Nagar police station. He was at Jyoti Nagar police station till late February 25 night. After that, our mother went to pick him up. I have full faith in the judiciary and I am sure we will get justice.” Grover said Delhi Police is yet to file a chargesheet.

As per the FIR, the MLC at GTB hospital stated it was a case of “physical assault by mob near Kardampuri around 4 pm on February 24”. The FIR states that head constable Manoj “looked for the injured at GTB hospital but… was told he got his treatment done and left… After this, Manoj went to his house in Kardampuri and found no eyewitnesses… and was told by people Faizan and his mother weren’t home…”

The FIR states on February 27, during treatment, Faizan died at Lok Nayak hospital, and that “Manoj went to the hospital to look for his mother, relatives and eyewitnesses but couldn’t find them”. The FIR states that after this, personnel went to his address and “the house was locked”.