Greater Noida buildings collapse HIGHLIGHTS: Nine bodies have been retrieved by the National Disaster Response Force (NDRF) teams. Several persons are feared to be trapped under the rubble and are yet to be located.

NDRF teams engaged in rescue operations on Wednesday morning. The police and NDRF personnel toiled throughout the night to search for bodies of victims. (Express Photo by Gajendra Yadav)

Two buildings — one of them under-construction — collapsed in Greater Noida’s Shah Beri village Tuesday evening. Nine bodies have been retrieved by the National Disaster Response Force (NDRF) teams. The identity of two bodies has been established. Several other persons are feared to be trapped under the rubble and are yet to be located. NDRF and local police are engaged in the relief and rescue efforts. The building is reported to have collapsed at around 08:45 pm.

Chief Fire Officer Arun Kumar Singh was quoted as saying that at least 12 labourers were inside the building at the time of the incident and all of them are suspected to be trapped. DGP O P Singh has been reported to have informed chief minister Yogi Adityanath about the rescue operation being carried out by police and NDRF personnel. “NDRF team, district police and fire personnel are engaged in the operations,” Singh said.

DGP O P Singh has been reported to have informed chief minister Yogi Adityanath about the rescue operation being carried out by police and NDRF personnel.  (Photo: Gajendra Yadav)

Meanwhile, three persons have been arrested in this connection, including the land-owner. FIR has also been lodged against 18 persons, a PTI report said. A magisterial probe has also been ordered.

What is causing the delay in the rescue operation?

Rescuers have deployed heavy machinery to shift concrete slabs and sniffer dogs tried to detect any signs of life. Those involved in the rescue operations were facing difficulties because of the narrow lanes in the area and the huge crowd. Drills were being used in an attempt to reach those who may be trapped under the debris. NDRF Director General Sanjay Kumar said the rescuers were exercising caution while operating the machines so that those trapped under the debris are not harmed. 'This is leading to the delay,' he said.

A day after a building collapsed in Greater Noida's Shah Beri village, Akhtar Abbas Naqvi, Assistant Manager (projects) and VP Singh, Manager (projects) have been suspended for negligence, ANI reported. Meanwhile, the NDRF has deployed nearly 160 personnel, dog squad and specialised equipment to find survivors. Officials of the eighth battalion of NDRF said they expect the rescue work to continue till Thursday evening.

The earth shook as if due to a quake: Resident of Shahberi village

Residents of the Shahberi village in Greater Noida thought that an earthquake had shaken the ground when two buildings collapsed Tuesday evening.

"We were having food when the earth shook as if due to a quake. We ran out, but we realised that a building had collapsed. When we rushed for help, we got to know that two buildings had collapsed," Narendra Dubey, a resident, told IANS. 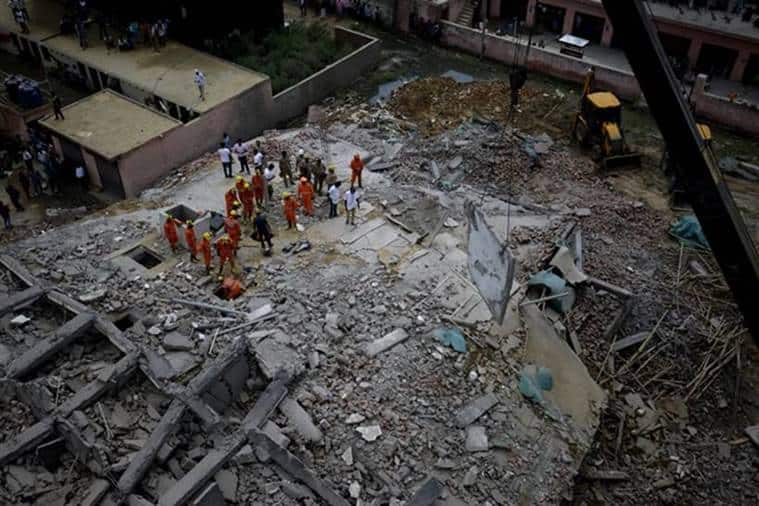 Nine bodies recovered so far; Rs. 2 lakh compensation given to families of deceased

NDRF teams have recovered four more bodies from the rubble of the buildings, summing up to nine bodies so far. Search and rescue operation continues. In a press release, CM Adityanath has announced Rs. 2 lakh compensation to the families of deceased and Rs. 50,000 to the injured. 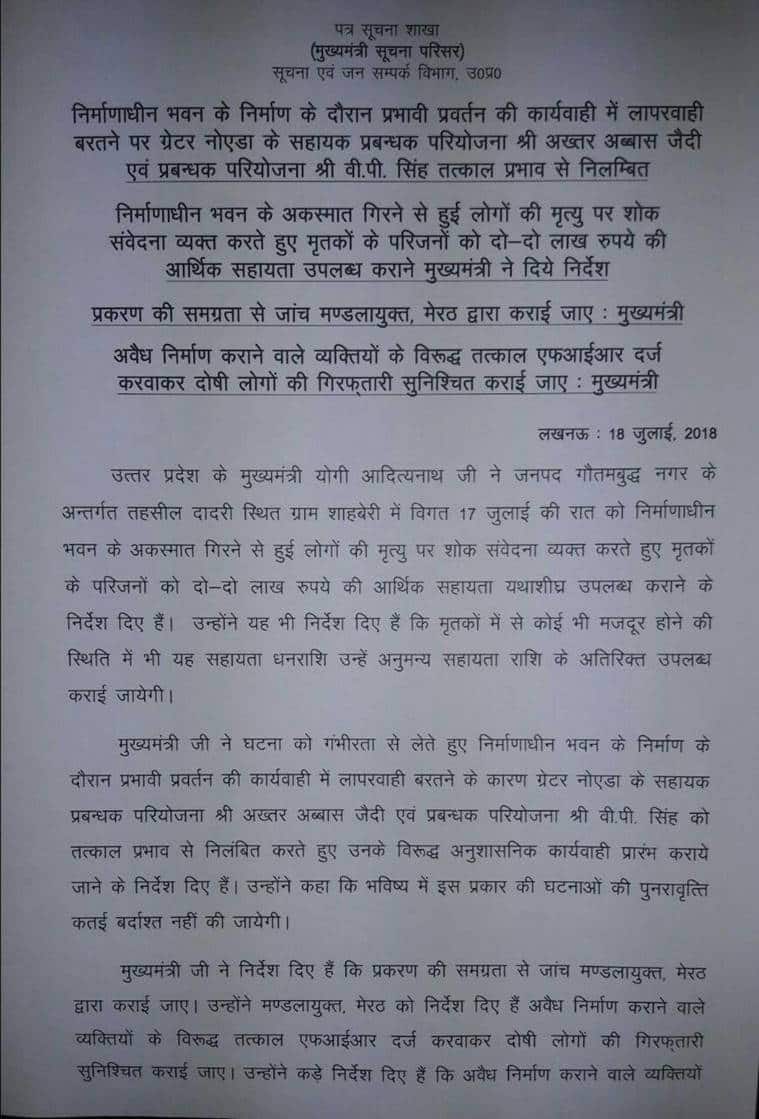 Shahberi is a "notified village" but acquisition of land was cancelled by SC: Greater Noida authority

Shahberi is a "notified village" under phase-1 of Greater Noida, however, the notification related to the acquisition of land was cancelled by a Supreme Court order in May 2011, said Greater Noida authority CEO Parth Sarthi Sen Sharma in a press statement.

DG NDRF Sanjay Kumar was supervising the rescue operation at the site where two buildings of four-storey and six-storey collapsed Tuesday evening. Many are trapped under the debris of the building and five bodies have been retrieved so far. Four people have been arrested and both criminal and administrative aspects will be investigated, DM BN Singh told reporters present at the spot. A magisterial inquiry under Additional District Magistrate (ADM) executive has been set up with 15 days time.

Magisterial probe will look into various issues like jurisdiction of buildings, NOC and labour laws

In relation to the jurisdiction and quality of the buildings, UP government's spokesperson said that the magisterial probe will verify whether both buildings fell under the jurisdiction of Greater Noida Authority and whether a no-objection certificate (NOC) was acquired prior to the construction of the buildings. Further, the probe will also look into the quality of materials being used while constructing the buildings and whether the labourers at the construction site were registered in accordance with the labour laws, as reported by PTI.

Two bodies have been identified that were pulled out from the rubble of the buildings collapse. Total three bodies have been pulled out. Four NDRF teams are present at the spot and search and rescue operation is underway, reported ANI.

Pankaj Singh, MLA from Noida termed the incident unfortunate and declared that illegal construction should be stopped.  "Officers who overlooked everything should be held responsible & strict action should be taken against them too," Singh said, as quoted by ANI. "The buildings collapsed like a matchbox. The rescue efforts are taking time since we cannot use heavy machinery to clear the rubble for fear of harming the trapped victims," a spokesman of the National Disaster Response Force told Reuters.

Taking note of the buildings, Senior police official Ram Kumar said that the two buildings appeared to have violated building codes and had no approvals from the district government, as quoted by PTI.

Update: Three people were killed and many are feared trapped in the debris of two fallen buildings in Noida. The incident occurred on Tuesday night and rescue operations have been underway since then. An FIR has been lodged against 18 people, while three people have been detained by the police.

Magisterial probe ordered into the incident: UP govt spokesperson

Taking note of the incident, Gautam Budh Nagar District Magistrate (DM) Brajesh Narayan Singh ordered a probe, seeking a report within 15 days, reports PTI.
'A magisterial probe has been ordered into the reasons behind the incident. Additional District Magistrate (administration) Kumar Vineet has been asked to carry out the probe. He will submit his report within 15 days,' the order said.

FIR lodged against 18 persons in connection with the incident.

An FIR under IPC sections 304 (culpable homicide not amounting to murder), 288 (negligent conduct with respect to pulling down or repairing buildings), 388 (extortion by threat of accusation of an offence punishable with death or imprisonment for life) and 427 (mischief causing damage to the amount of fifty rupees) were lodged at the Bisrakh police station against 18 persons in connection with the incident, said Inspector General of Police, Meerut Zone, Ram Kumar was quoted a saying by PTI.

He said the owner of the land, Gangashankar Dwivedi, and two others -- Dinesh and Sanjay -- were arrested.

Difficulties in rescue operations due to narrow lanes 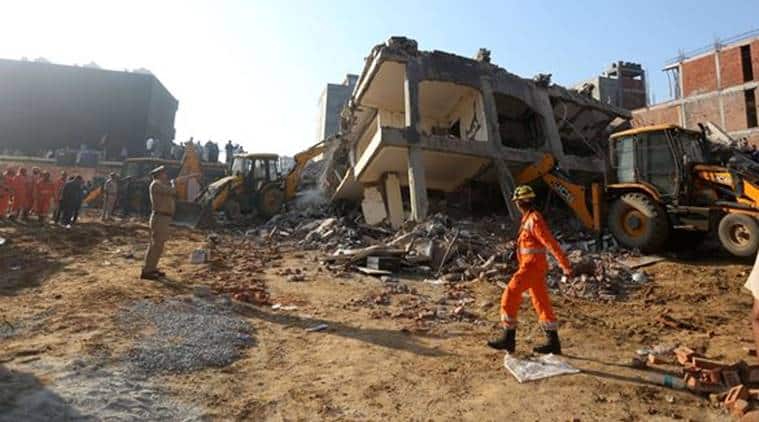 Those involved in the rescue operations were facing difficulties because of the narrow lanes in the area and a huge crowd that had gathered there, an official was quoted as saying by PTI. Drills are being used to remove metal rods to reach those trapped under the debris and a dog squad has also been pressed into service.  (Express Photo by Gajendra Yadav)

At least 12 labourers were in the building at the time of incident: Chief Fire Officer

At least 12 labourers were in the under-construction building when the incident took place and all of them were feared trapped, Chief Fire Officer (CFO) Arun Kumar Singh was quoted as saying by PTI. He added that while two bodies were pulled out of the rubble late last night, another body was pulled out this morning.

Uttar Pradesh Chief Minister Yogi Adityanath has directed the Gautam Budh Nagar district magistrate and the police to monitor relief and rescue activities along with the NDRF team, reports PTI.

Three people, who were arrested in connection with the building collapse in GreaterNoida 's Shah Beri village, have been identified as a builder and his two associates, reports ANI.