Kisan Kranti Yatra: On two sides of the farmer-police divide, a father and a son

A policeman, one of nearly 2,500 manning the border Tuesday, stood atop the UP Gate flyover as part of bandobast. From his vantage point in front of the water cannon, he could see a sea of increasingly impatient farmers ready to march into Delhi. One of them was his father. 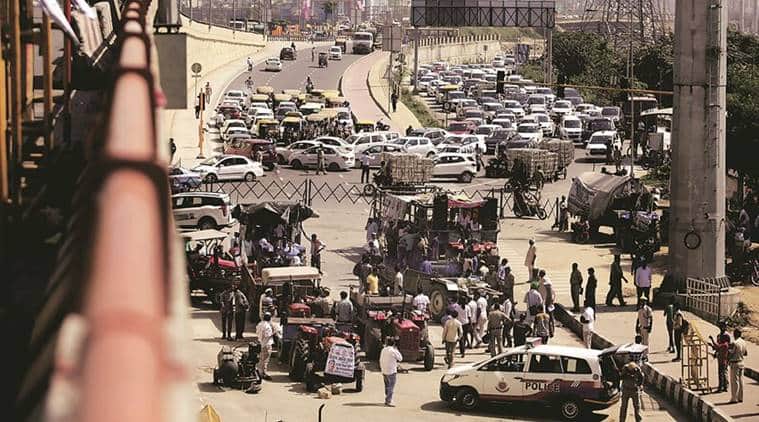 On the Uttar Pradesh-Delhi border on Wednesday. (Praveen Khanna)

The yellow barricades erected at the Delhi-Uttar Pradesh border on Tuesday to prevent farmers from entering the capital didn’t merely divide the protesters and Delhi Police; in at least one case, they also drew a wedge between a family. A policeman, one of nearly 2,500 manning the border Tuesday, stood atop the UP Gate flyover as part of bandobast. From his vantage point in front of the water cannon, he could see a sea of increasingly impatient farmers ready to march into Delhi. One of them was his father.

“I belong to village Sisauli in District Muzaffarnagar,” the policeman, who wished not to be identified, told The Indian Express. “Nearly 200-300 people from our village were part of the Kisan Kranti Yatra. My father was also one of them,” he said. Sisauli is also the village of Naresh Tikait, the Bhartiya Kisan Union leader who was heading the protests.

“I was concerned for his safety when the protesters became violent and police started using teargas and water cannons to disperse them. I couldn’t contact him at that time, and it was only much later that I found out that he and other relatives of mine were alright. Tab ja ke chain ki saans li (It was only then that I felt relief),” the officer added. There were other cases too on Tuesday, when officers found themselves against their acquaintances. In one incident, a group of farmers who had come from village Fugana in Muzaffarnagar to participate in the march, went over for dinner to the house of a Delhi Police officer, who was their relative.

Read | After midnight visit to Kisan Ghat, farmers pack up and head home 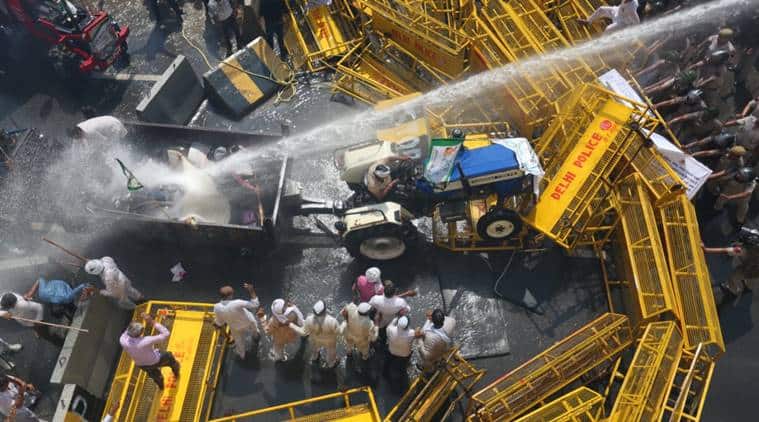 “It wasn’t unusual because a lot of Delhi Police constabulary comes from western Uttar Pradesh. Especially the rural west UP. And Bhartiya Kisan Union (BKU) too holds sway in the same region,” explained a senior Delhi Police officer who was present at UP Gate. “I would say, nearly 70-80 percent of the cops holding off the protesters were from west UP. It wasn’t a conscious decision, though. It so happened that the policemen were drawn from Delhi’s eastern region where west UP is over-represented,” the officer added.

Consequently, on either side of the barriers, you had people who came from the same socio-economic background and spoke the same gruff dialect of Khari Boli. Even when they didn’t know each other, they understood each other. “Ham kisano ke bacche hi toh hain (we all are sons of farmers),” said the cop from Sisauli. “Kal toh duty thi, isliye inko rokna pada, par aap ye batao kaunsi maang galat hai inki (Yesterday it was my duty to stop them, but tell me one demand they have listed that is wrong?)” he asked. He said he visits his village “once every 10-12 days” and was aware of the agrarian stress that has forced these farmers to protest.

“The average land holding in west UP is about 7-8 bighas (less than 2 acres). They don’t make more than Rs 1 lakh a year, and that too the sugar mills haven’t paid. Now, you have this (NGT) order that tractors older than 10 years can’t be plied. 10 saal mein toh tractor ka karza nahi utarta (In 10 years, you can’t even pay off the tractor’s loan),” he said.

On Wednesday, when the protests ended after negotiations with the government, all tension at the UP Gate, where the standoff took place, dissipated. “Aap kahan se ho… Acchha mera gaaon bhi paas mein hi hai (Where are you from… oh, my village is also close by)” — was a common refrain as a few among the cops even shared a smoke with the farmers who were in the process of packing up and heading home.

“Hain to saare hamare hi (all these boys/cops are ours only),” said Ganga Mal Singh Sirohi, a 78-year-old farmer from Saidpur, Bulandshahr, as a young constable who hails from same district nodded in agreement. The constable weighed in: “My father is like him, a farmer. Their problems are his problems. Main inke khilaf nahi hun, main to sirf apni duty kar raha tha (I’m not against them, I was just carrying out my orders).” “Ye to sarkaar humein lada rahi hai (It’s the government that pitting us against each other),” added Sirohi.

A decade on, Punjab and Haryana HC orders reinstatement of civil judge