JNU violence Highlights: Two days after the mob attack on JNU campus, Delhi Police requested the eyewitnesses to share with them the photos, footage, and other information of the January 5 violence. “All those who are witnesses to JNU violence or have any info about it or have captured any activity on mobiles or camera, are hereby requested to come forward and give their statements, footage or pictures to SIT at administrative block, JNU campus,” Joy Tirkey, DCP-Crime, Delhi Police, said.

Vice-Chancellor Mamidala Jagadesh Kumar termed the incident “unfortunate” and vowed to make use of any opportunity that comes his way to restore normalcy on campus. Addressing a press conference, Kumar said, “The incident that took place on Sunday, Jan 5 is unfortunate. Our campus is known for debates and discussions to resolve any issues. Violence is not a solution. We will find every opportunity to make sure that normalcy returns to the University.” Stating that the registration process for the winter semester has been restarted, he said, “Let us make a new beginning and put the past behind.”

Earlier in the day, a team of Crime Branch officers and forensic specialists visited the varsity to probe the violence. No arrests have been made so far in the case. The Delhi Police which has come under criticism for a slow and ineffective response to the situation said they handled the matter “professionally.” The registered FIR states that the police personnel warned the mob to disperse peacefully, but were ignored. An FIR has also been registered against JNU Students’ Union president Aishe Ghosh and 19 other people for allegedly vandalising the university server room and attacking security guards on January 4.

JNU campus was attacked by a mob on Sunday night. A series of protests have begun across the country condemning the violence. Follow Highlights

Pune students march from FTII to SPPU in solidarity with JNU

Students from various educational institutions in Pune march from FTII to SPPU in solidarity with the JNU students. Citizens also join in. 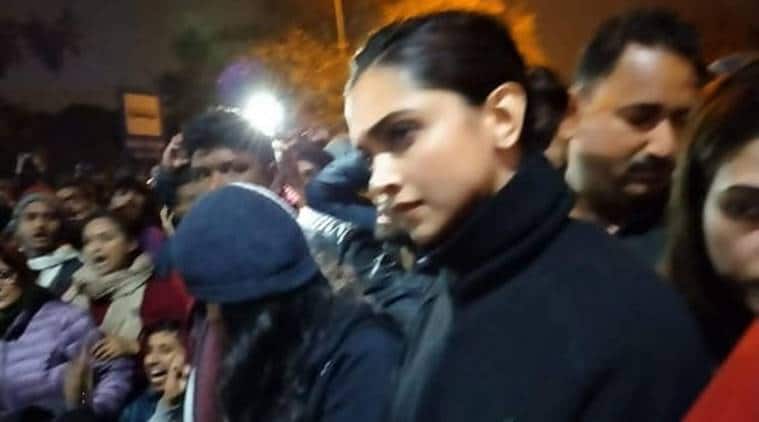 West Bengal Governor Jagdeep Dhankhar Tuesday accused Chief Minister Mamata Banerjee of a "selective approach" in condemning the assault on JNU students and said the silence of authorities over what happened at Jadavpur University is "painfully worrisome". (PTI)

Protest against JNU violence near Churchgate station in Mumbai

A protest was organised near Mumbai's busy Churchgate station on Tuesday evening against the Sunday violence on JNU campus in Delhi. The protesters, mainly comprising women, held placards criticising the Akhil Bhartiya Vidyarthi Parishad (ABVP), which is accused of orchestrating the attack on JNU students, and Union Home Minister Amit Shah. (PTI)

A team of photo experts from the FSL was also present at the campus. Delhi Police has requested the FSL to also send a computer forensics team to analyse CCTV footage and it is likely to visit the university on Wednesday, according to the sources. (PTI)

Nearly 50 IIT Bombay students and faculty members gathered to reiterate the values of Constitution in the aftermath of the attacks in JNU. (Express Photo: Abha Goradia) Members of civil society, political activists and various others from the society take out a massive rally in Kolkata against the attack on JNUSU president Aishe Ghosh and CAA, NPR, NRC. (Express Photo: Partha Paul) SFI, TSU, and left student organisations hold a protest march in Tripura against JNU attack. They have called for a nation-wide strike on January 8 condemning attacks on students in educational institutions. 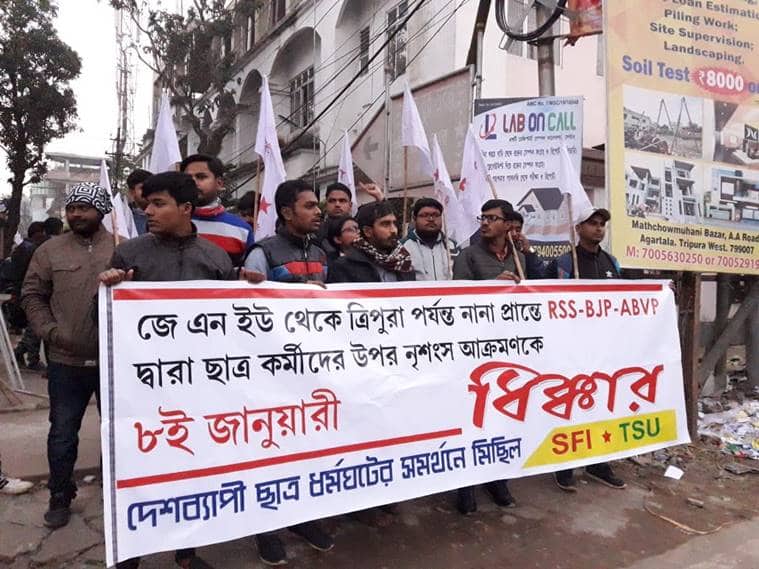 When there is law and order situation,we first see if varsity security can handle it: VC

On delay in calling the police on campus on January 5, VC Mamidala Jagadesh Kumar said, "When there is law and order situation, we don't rush to police immediately; we see if varsity security can handle it. We informed police on Sunday when we saw the possibility of aggressive behaviour among students." Read more...

Share with us all videos, pictures of violence, Delhi Police tell eyewitnesses

Joy Tirkey, DCP- Crime, Delhi Police,  said "All those who are witnesses to JNU violence or have any info about it or have captured any activity on mobiles or camera, are hereby requested to come forward and give their statements, footage or pictures to SIT at administrative block, JNU campus."

Violence not a solution to anything: Ajay Devgn on JNU

Bollywood star Ajay Devgn on Tuesday said violence is not a solution to any problem and the Jawaharlal Nehru University attack is "very sad".
"I have been watching the news since morning. It's very conflicting. Till now, we don't know who has done what. So till the time this is not clear, I don't know how to comment. It is all very sad what's happening," Ajay told PTI in response to a question on his views on the JNU attack.
"Whoever is doing it, is wrong. Violence is not a solution to anything, it's just harming our country. What is the agenda behind it, if you know, then please tell me because whatever there is in the news is not clear," he added. (PTI)

Those who created mayhem in JNU should be identified, arrested: Athawale

Union Minister of State for Social Justice and Empowerment Ramdas Athawale on Tuesday said those who indulged in the mayhem in Jawaharlal Nehru University should be identified at the earliest and arrested. Talking to mediapersons here, Athawale, the president of RPI(A), an ally of the BJP, said the fact-finding team headed by Delhi Police joint commissioner Shalini Singh, which has been asked to probe into the incident, should complete its job as soon as possible so that the perpetrators of the crime are brought to book. (PTI)

Where were you when outsiders entered campus pn Jan 5, Shamsul Islam asks police

Author and theatre activist Shamsul Islam asks police where they were when outsiders entered the campus and rampaged on January 5.

Author and theatre activist Shamsul Islam asks police where they were when outsiders entered campus and rampaged on January 5. @IndianExpress @ieDelhi pic.twitter.com/LWsUSyaQ1b Days after the Jawaharlal Nehru University was rocked by violence, Vice President M Venkaiah Naidu on Tuesday said educational campuses must not become safe havens for the politics of hate and violence to thrive.

"Our children, when they leave the portals of the educational institutions must be enlightened citizens who will take an abiding interest in protecting our democracy and preserving the fundamental values that are enshrined in our constitution. But our campuses must not become safe havens for the politics of hate and violence to thrive. Academic endeavors and co-curricular initiatives must attain primacy in our universities and not factionalism and divisive tendencies," Naidu said.

JNU alumni march led by Sitaram Yechury, Prakash Karat has been stopped by Delhi Police at the university main gate. The alumni not being allowed to enter.

A scuffle between JNU students and ABVP supporters (right) outside the main gate of JNU. Express Photo by Abhinav Saha

In Mumbai, meanwhile, barely hours after the police evicted around a hundred protesters from the Gateway of India and dropped them at Azad Maidan, the 'Occupy Gateway' protest was called off. The protesters are likely to join the 'Bharat bandh' called by the trade unions tomorrow against the Centre's 'anti-people' policies. The police cited inconvenience to tourists and residents and shifted the protesters. "Roads were getting blocked and locals, as well as tourists, were facing problems. We had appealed to protesters many times and have now relocated them to Azad Maidan," Sangramsingh Nishandar, DCP (Zone 1) said.

Of the 36 injured in the attack, four suffered head injuries while the others sustained soft tissue injuries on the head, scalp, elbows, and hands. Aishe Ghosh who received 16 stitches after the attack on her, alleged that the Sunday violence was an organised attack, and some “RSS-affiliated professors” were promoting it.

The HRD Ministry has, meanwhile, expressed "displeasure" over the insensitivity displayed by the JNU administration. The Ministry also advised them not to "precipitate" the matter by pursuing police cases and disciplinary action against students. Both teachers and students injured in the violence said no one from the JNU administration had reached out to check on them.

Masked men wielding sticks, rods and sledgehammers terrorised Jawaharlal Nehru University for close to three hours on Sunday evening, entering hostels, attacking students and teacher. Eyewitnesses and many of those injured said the men, who as per some estimates numbered around 100, were mostly outsiders and belonged to the ABVP — a charge the RSS student outfit denied. Eyewitnesses also accused police of failing to stop the mob from entering the campus or ending the violence sooner, despite calls from JNU as well as frantic students and teachers.

A day after goons unleashed terror inside the Jawaharlal Nehru University (JNU) campus, the Delhi Police crime branch Monday registered a case against unidentified persons for rioting and damage to property. Union Home Minister Amit Shah spoke to Lieutenant Governor Anil Baijal this morning and directed him to speak to representatives of JNU regarding the violence. The development came after the L-G met the JNU Registrar and Pro-Vice-Chancellor this morning.

HRD Minister Ramesh Pokhriyal called the incident “unfortunate” and urged students to maintain peace and protect the dignity of the university. His ministry tweeted, “a group of masked people entered the JNU campus today, threw stones, damaged property and attacked students. This is very unfortunate and highly condemnable, such acts of violence and anarchy will not be tolerated.”

Delhi Chief Minister Arvind Kejriwal held a meeting at his residence this morning, which was attended by senior AAP leaders. On Sunday, Kejriwal had expressed “shock” at the violence on campus. “Students attacked brutally. Police should immediately stop violence and restore peace. How will the country progress if our students will not be safe inside the university campus?” he had tweeted. He later said he had spoken to the L-G and urged him to direct the police to restore law and order on campus.

The senior warden of Sabarmati hostel in JNU resigned after citing security reasons at the campus. “I am informing you that I am resigning… because we tried but can’t provide the security to hostel,” the resignation letter read.