JNU teacher whose office was vandalised speaks: ‘I am connected with RSS… Left thinks whatever they say is correct’

On Thursday morning, the doors of the chamber offices of four teachers in JNU’s School of International Studies were found spray painted with the words “Go back to shakha”, 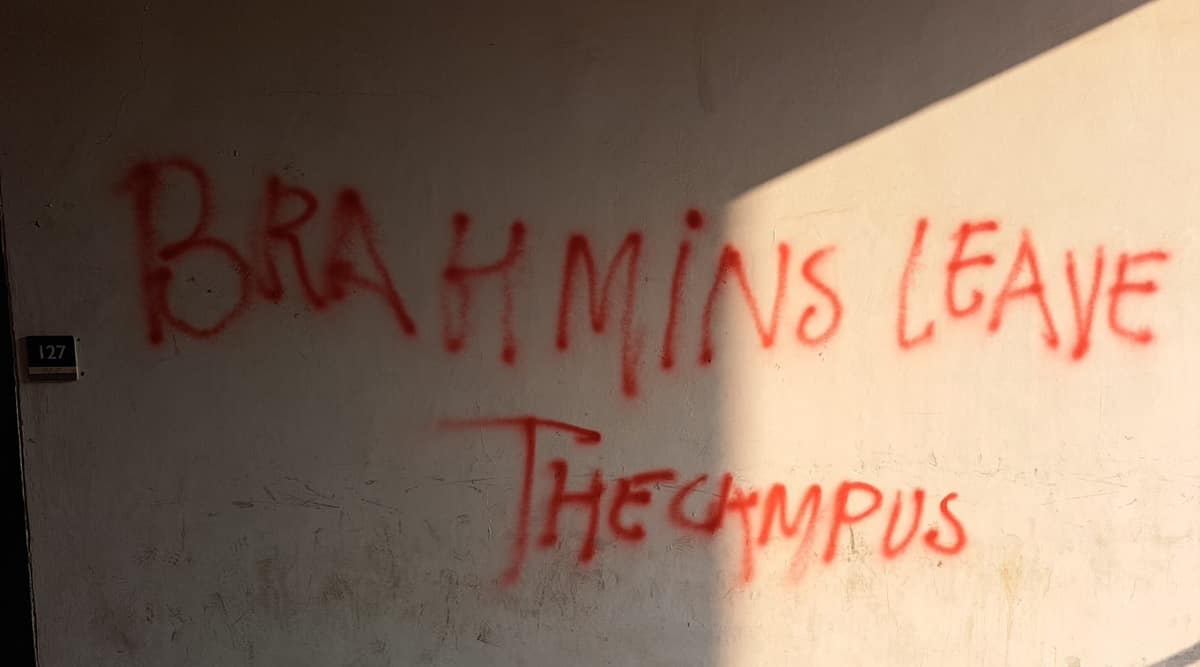 The Acting Registrar issued a notice on Thursday evening stating that the Dean, School of International Studies, and the Grievances Committee have been asked to inquire and submit a report to the Vice-Chancellor. (Express Photo)

Ideological differences should not lead to actions which vitiate the atmosphere of the university and create an air of violence, said Pravesh Kumar, one of the teachers whose chamber doors were vandalised at Jawaharlal Nehru University this week.

On Thursday morning, the doors of the chamber offices of four teachers in JNU’s School of International Studies were found spray painted with the words “Go back to shakha”.

Also Read |From JNU sanitation worker to Left candidate, with a little help

According to Kumar, all these teachers are either directly associated with the RSS or are sympathisers of it. “I am connected with the RSS, I am also a national spokesperson for the VHP… This is the problem with the Left. They think that whatever they say is only correct… Before 2014, caste-based politics was much more prevalent but after that, Hindutva politics has come to the fore which assimilated all the different groups into the Hindu fold. Because JNU draws national attention, we are seeing attempts to create fractures,” he said.

While the administration has set up an inquiry into the matter, as of Friday night, it was not known who had created this graffiti.

Another teacher whose chamber door has the same graffiti, said, “Public property should not be destroyed. This is public property and this is a place to study. This is just increasing the expenditure of the university. It’s childish behaviour.”

Along with this, graffiti on the walls of the nearby School of Languages-II building stating “Brahmin Bharat chhodo” and “Brahmo-Baniyas, we are coming for you” have raised alarm.

“… on the recommendation of the emergency meeting of the Dean with the Chairpersons of the SIS held on 2nd December… on the incident of defacement of walls and faculty rooms by unknown persons, the reading rooms situated in SIS-I building and the second floor of the SIS-II building will be closed from December 5 for shifting of all the reading rooms on the ground floor of SIS-II building”.

On Friday, security guards were also issued verbal instructions to ask students to leave the building by 7 pm and not allow them in before 8 am, while so far, it is open round the clock to them so they can use the reading rooms.

In the meantime, both the ABVP and the JNU students’ union as well as both the JNU teachers’ association and the pro-government JNU teachers’ forum condemned the incident.

“The JNUSU strongly condemns any such acts that purposefully attack any community to encourage any form of disharmony or disturbance of the peaceful environment of the campus… Although political art and wall postering are an integral part of the political culture of the university, we have never witnessed the same to have been employed for hateful purposes under the garb of anonymity. The JNU Administration must take cognisance of such slogans and take the requisite strict action according to the statutes of the university,” read a statement issued by the JNUSU.

Cross-accusations have been made with the ABVP accusing “Leftist parties” of the vandalism, while the JNUSU has suggested that the ABVP’s role stating “ it is only a certain group within the campus that has repeatedly attempted to vitiate the campus environment, either through such condemnable stunts or through outright violence, in order to maintain an atmosphere of insecurity on the campus”.