JNU students protest Highlights: JNU students Monday gathered on the university campus to march towards Rashtrapati Bhavan demanding an appointment with the President of India, who is also the visitor of the varsity. They will seek his intervention in the hostel fee hike issue.

Ahead of the march, security has been beefed up around the university. The exit and entry gates of three metro stations — Udyog Bhawan, Lok Kalyan Marg and Central Secretariat — have been closed in view of various protests, including the JNU march and one over the Unnao case. Roads leading to JNU have been closed for traffic, the traffic police said. Baba Gangnath Marg is closed for traffic due to the long march, they added.

The students have been protesting for over a month against the hike in the hostel fee and have given a call to boycott the upcoming semester exams despite repetitive warnings from the administration. Earlier, the HRD Ministry set up a three-member committee to look for ways to mediate between the protesting students and the varsity administration, and thereby restore normal functioning in JNU.

The Jawaharlal Nehru University administration has said that the protesters' call to boycott end-semester exams is "against the academic careers of thousands of their fellow students". The administration has appealed to the agitators to "call off their agitation immediately so that normalcy returns to campus"

Jawaharlal Nehru University (JNU): The call given for boycotting end semester exams is clearly against academic careers of thousands of their fellow students. Administration once again appeals to agitators to call off their agitation immediately so that normalcy returns to campus pic.twitter.com/JGffAdJmek

HRD ministry 'won't interfere' in JNU, but 'may facilitate resolution'

The government is unlikely to make a direct intervention in the deadlock between the JNU administration and the students protesting against hostel fee hike, official sources said on Monday.

The HRD ministry may "facilitate" a resolution but will not issue any "directive", they said. "Issuing a directive may be undermining their autonomy. We will facilitate the resolution rather than directly interfering in it," an official source said. (PTI)

JNU admin says 'open to dialogue, but students not ready'
As JNU students refuse to call off their march to Rashtrapati Bhavan, university administration says it is willing to 'hold dialogue with students', but 'they are not ready for it'.  (PTI)
Police attacked us brutally, has detained several students: JNUSU president

Scores of JNU students were lathicharged by police on Monday and several of them detained when they tried to march towards Rashtrapati Bhawan against the hostel fee hike, throwing traffic out of gear and leaving metro commuters stranded for hours with three central Delhi stations being closed as a precautionary measure.

According to JNU Students Union (JNUSU) president Aishe Ghosh, "Several students, including women, have been detained by police, which brutally attacked the protesters, asking us to go back to campus."

"We will not budge from here until our demands are met and a complete rollback in the fee is announced," she added. (PTI)

Entry and exit gates at Udyog Bhawan, Lok Kalyan Marg and Central Secretariat metro stations, which had been closed in view of the JNU protest march, have been reopened.  According to the Delhi Metro Rail Corporation, normal services have resumed at all stations.

Normal services have resumed in all stations. https://t.co/GhcmqzLpic

Traffic movement was slow at various intersections in South Delhi due to the protest march taken out by JNU students against the hostel fee hike on Monday. "Due to the demonstration, the traffic movement is affected on the road leading to Dhaula Kuan from AIIMS. Commuters should avoid the route," the Delhi Traffic Police tweeted.

"Traffic movement on Africa Avenue was slow and the route from Bhikaji Cama Place is obstructed. Kindly avoid this stretch," the police said.

Traffic jam near the Hyatt hotel in New Delhi as JNU students march. Students are demanding a complete rollback of the fee hike announced by the administration. Express photo by Tashi Tobgyal. 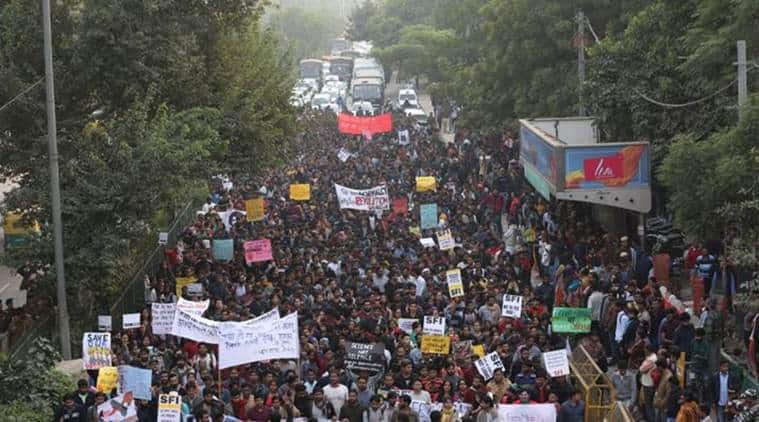 Police crack down on JNU protestors 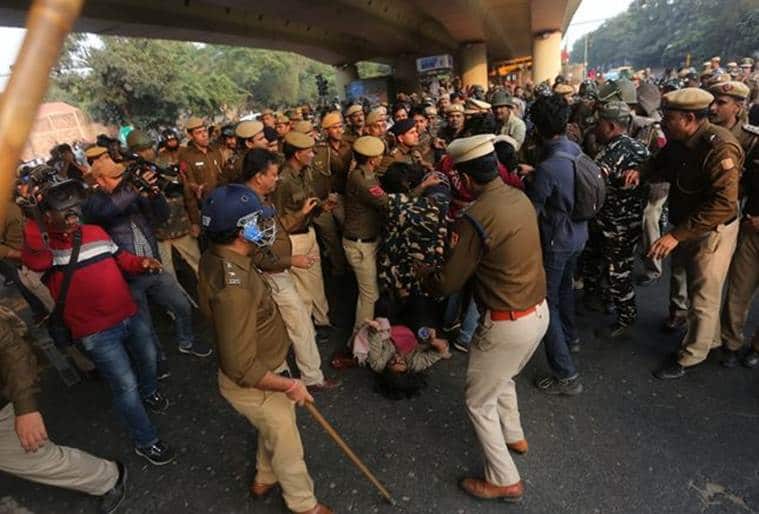 Police resorted to lathicharge after a clash with protesting Jawaharlal Nehru University (JNU) students near Bhikaji Cama place metro station. Police say students were trying to jump over a barricade.  The students are marching towards Rashtrapati Bhawan to meet the President over fee hike issue. The JNU Teachers' Association Monday wrote to President  Ram Nath Kovind, urging him to use his powers as visitor to "end the state of crisis" brought about at the university  "by the misgovernance" of the V-C,  M Jagadesh Kumar.  The JNUTA urged the President to "take cognizance of the rapid destruction of a premier research and educational institution" and to "find a way out of the current crisis".

Amid tight security at the campus, JNU students have begun their march to Rashtrapati Bhavan. Since the fee hike was officially passed last month and the student community erupted in protest, JNU has announced two partial rollbacks. The students, however, have continued to demand a complete rollback, and that the university administration should consult them before implementing any such increase in the future.

JNU students have started their march to the Rashtrapati Bhavan amid tight security at the campus. Since the fee hike was officially passed last month and the student community erupted in protest, JNU has announced two partial rollbacks. The students, however, have continued to demand a complete rollback, and that the university administration consults them before implementing any such increase in the future. "As advised by Delhi Police, entry and exit at Udyog Bhawan, Lok Kalyan Marg and Central Secretariat have been closed. Trains are not halting at Udyog Bhawan and Lok Kalyan Marg," the Delhi Metro Rail Corporation (DMRC) said on Twitter.
While Delhi Congress members are protesting to express solidarity with the Unnao rape victim , JNU students are marching to the Rashtrapati Bhawan against the hostel fee hike. (PTI)

According to Delhi Traffic Police, roads leading to the JNU have been closed for the traffic. Baba Gangnath Marg is closed for vehicular traffic due to students' long march, they said.

Welcome to The Indian Express blog

Welcome to The Indian Express blog! Stay tuned for the latest updates on JNU protest march.

The Human Resource Development (HRD) Ministry, meanwhile, has advised the Jawaharlal Nehru University (JNU) administration to notify the students’ union and withdraw police complaints against students as the first step to end the standoff at the university.

The government is learned to have proposed a compromise formula to the university over the weekend. The ministry is now waiting to hear back from JNU.

The notification of JNUSU and withdrawal of police complaints are part of the compromise formula. If the university agrees, the government expects the students to call off the agitation, to not “gherao” JNU officials, and to commit to a “dialogue” with the university.