It was only after midnight that power was restored after a group of students, as a mark of protest against what they said was a deliberate blackout, watched parts of the documentary on their phones and laptops. 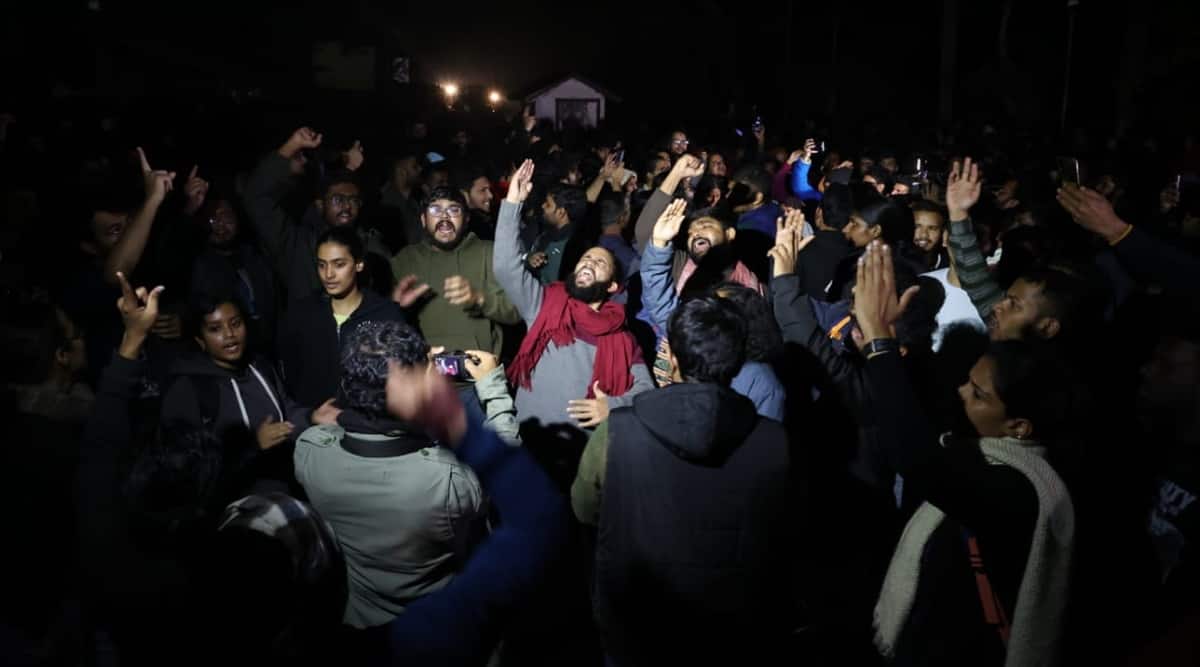 AT 8.30 pm, barely half an hour before the Jawaharlal Nehru University Students’ Union planned to screen the first episode of the two-part BBC documentary, ‘India: The Modi Question,’ which was pulled down by YouTube and Twitter on orders from the Centre, the campus was plunged into darkness.

It was only after midnight that power was restored after a group of students, as a mark of protest against what they said was a deliberate blackout, watched parts of the documentary on their phones and laptops.

Also Read |Who owns the BBC, and how does it operate?

“We have been told by the JNU V-C and the university Registrar that it’s a massive power failure which has affected one-third of the campus. There is no deliberate attempt to cut power,” said an official in the Union Education Ministry.

Don't Miss |BBC documentary on PM Narendra Modi: Links taken down, how does govt use its ‘emergency powers’ for online content?

However, sources said such a prolonged power cut on campus was unusual. BSES, which supplies power to the campus, had no mention of the outage on its website — its last entry for the day for “maintenance outage” in the neighbourhood was for one between 11 am and 3 pm.

Said a Master’s student: “We had no electricity or internet in the hostels. We had reached out to our warden but got no response.”

The power cut affected faculty housing, too, many professors told The Indian Express.

In a video from campus, JNUSU president Aishe Ghosh was seen waving a sheet of paper with a QR code. “If they shut down one screen, we shall switch on hundreds,” she is heard saying. Students stand outside the JNUSU Office alleging that the JNU administration has cut off electricity supply to prevent the screening of BBC documentary India: The Modi Question, in New Delhi, Tuesday. (PTI Photo)

Speaking later, she said: “JNU held screenings of movies like The Kashmir Files but we never got an advisory from the administration. This is happening for the first time.” She added that whenever there was a power cut, the campus community was “notified” by the administration “but this time we got no notice.”

Around 10.30 pm, some stones were thrown at the crowd of students that had gathered to watch the documentary, but in the dark, it was not clear where these had come from.

JNU asks to cancel the screening of the documentary “India: The Modi Question” scheduled for 24th Jan by a group of students stating that “such an unauthorised activity may disturb peace & harmony in the University.”. pic.twitter.com/yQwDah9xx7

A PhD student from the Centre for Political Studies alleged he had been hit in the shoulder and others had received injuries, too. Following this, the students marched to the main gate and raised slogans until past 11.30 pm.

When asked about the power cut and stone-pelting, DCP (Southwest) Manoj C said, “If we receive a complaint from any section of JNU , necessary legal action as deemed appropriate will be taken.”

JNUSU gave a call for screening of the “India:The Modi Question” documentary which was blocked by Modi Govt.The JNU admin siding by the govt snapped electricity-internet to stop the screening from happening. ABVP attacked students. However students of JNU carried out screening.✊🏾 pic.twitter.com/ggJnQjVcFo

A little past 11 pm, there were two PCR vans stationed outside the campus gate.

On Monday, the university administration had dissuaded students from going ahead with the screening. In a statement, it had said: “No prior permission for this event has been taken from the JNU administration. This is to emphasise that such an unauthorised activity may disturb peace and harmony of the university campus. The concerned students/individuals are firmly advised to cancel the proposed programme immediately failing which strict disciplinary action may be initiated as per university rules.” The protesting students marched to the Vasant Kunj police station to lodge a complaint against the “stone pelters”. (Express Photo) A little past 11 pm, there were two PCR vans stationed outside the campus gate. (Express Photo)

In response, the students’ union said: “The screening is a voluntary action by the students… Can you please specify the provision of the JNU Act/Statute/ Ordinances/ Rules and Regulations governing the University which mandates that prior permission is required from the administration for screening of any film/documentary on the university premises?”

Government officials claimed the documentary had “the potential to adversely impact” the country’s “friendly relations with foreign states” and “public order within the country”. The BBC documentary focuses on PM Narendra Modi’s and his then state government’s response to the 2002 Gujarat riots.