The couple first met in 2019 when Anna, who worked at a private company in Kyiv, visited India for a vacation. They exchanged numbers and became friends 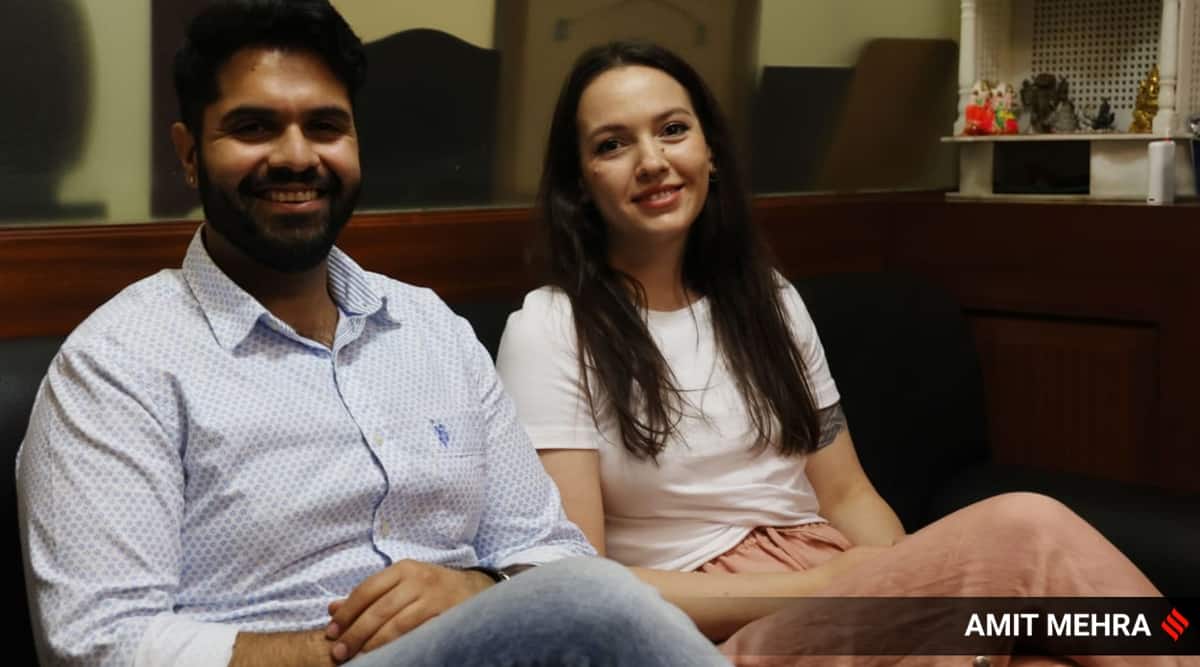 Ukrainian national Anna Horodetska, 30, had been looking forward to her wedding in March, with Delhi High Court lawyer Anubhav Bhasin, 33. The couple had decided to go for a low-key affair in South Delhi instead of a big fat Indian wedding.

Then, Russia invaded her country.

Hiding in a bunker in the Ukrainian capital of Kyiv soon after the invasion began, Anna spoke over the phone to Anubhav, who told her to stay put. But she decided she had to reach India one way or the other.

An India-Ukraine love story has a happy ending — with a proposal at Delhi airporthttps://t.co/nXbLFFwY8E@mohanreports pic.twitter.com/DoxhU7caGO

Her arrival at IGI Airport was anything but ordinary – she was greeted with the sound of dhols and could not believe when Anubhav went down on one knee, took out an engagement ring and asked: “Will you marry me?”

“I was super tired from the journey and did not expect him to do that. I said yes. I fled a war to be with him. I met his mother, who welcomed me with flowers. It was all so nice,” Anna said.

The couple first met in 2019 when Anna, who worked at a private company in Kyiv, visited India for a vacation. They exchanged numbers and became friends. After speaking for months over WhatsApp, she returned to Rajasthan for a road trip the next year when the lockdown was announced due to the Covid pandemic.

“I helped her during the lockdown. We grew closer,” Anubhav said. After meeting a third time in Dubai in February 2021, and then a fourth time in India later that year, Anubhav’s mother asked Anna to marry her son. “My mother proposed on my behalf. We decided to get married under the Special Marriage Act and were preparing documents for it when the war broke out,” Anubhav said.

Anna fled Kyiv with a change of clothes and a coffee machine her grandmother gave as a wedding gift. “I told her, are you crazy, there is a war and you are carrying a coffee machine. She said this was our wedding gift and she would not leave it behind,” Anubhav said.

After reaching Lviv with her mother, Anna left for the Polish border. After a two-week stay in Poland, she got a two-year Indian visa. Her mother left for Norway and is en route to Mexico to stay with her husband.

Anubhav recalled spending sleepless nights tracking the events in Ukraine and speaking to senior advocates at the Supreme Court to for help with the visa. “She finally managed to get one with help from the Indian Embassy in Poland.”

Anna now waits for the war to end in Ukraine. She has a dog named Bao she left with her grandmother at Kamyanka village in Cherkasy region. The couple plan on getting married on April 27.

“I want to go back to Kyiv when the war is over and get my dog back. I will spend my life in India,” Anna said.

Hundreds of farmers protest for MSP, other issues in Mohali