Herein lies a king: A day in the life of Alauddin Khilji’s tomb

Swamped by TV debates, drowned in WhatsApp Forwards, and inundated by persons drawn to his lonely stone maqbara now because of a film and the narratives around it, a Sultan and his legacy are dying another slow death. 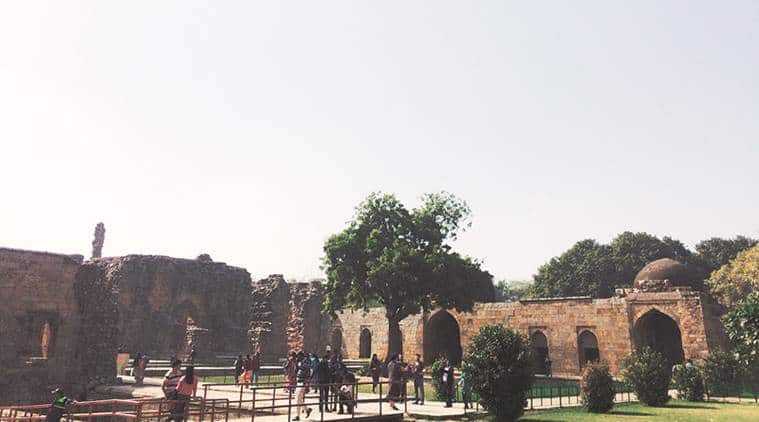 The visitors this Saturday bear the impressions of Khilji from Padmaavat to his tomb.

It is a sunny Saturday winter afternoon, and Qutb Complex is teeming with people, including Indian and foreign tourists, photographers and a new breed of Instagrammars, travel bloggers, children, love-struck couples, families, and young boys and girls celebrating their birthdays.

Walking past the towering corbelled arched gateways of Quwwat-ul-Islam Masjid, considered North India’s first mosque and built by Iltutmish nearly 800 years ago, in the shadow of the 238-ft-tall Qutb Minar, a young woman nudges her husband, pointing to a red sandstone block, supplanted on a green cover.

“Dekhiye naa, Khilji ka maqbara (See, Khilji’s tomb),” she says. “Oh, the same Padmavati one,” her husband reacts, and as the two look at each other, the frowns on their faces leave little to the imagination about their disdain for the Sultan. Glancing at the tomb, she adds, “Lagta hi nahin hai ki raja ka maqbara hai (It doesn’t look anything like a king’s tomb).” The husband replies with a paused “hmmm”, and both move on.

Alauddin Khilji, the Sultan of India, the man who aspired to be the ‘Second Alexander’ — 1,600 years after the first — lies in that 16 ft by 12 ft enclosure, on a 7ft by 4 ft stone pedestal. Surrounded by thick walls once made of limestone and rocks but now eroded, baring the sharp-edged rocks underneath, and under an open sky after the roof over him crumbled.

Seven hundred years after he lorded over a kingdom that stretched from the Bay of Bengal in the East to Bamiyan, Afghanistan, in the West, and Deccan in the South to Hindu Kush in the North, Khilji lies here vanquished not by anyone else but time. And now, by a film.

The visitors this Saturday bear the impressions of Khilji from Padmaavat to his tomb, some shaped by the Sanjay Leela Bhansali-directed venture, and others by the narrative around it, reinforced with every TV newsnight debate and WhatsApp forward. Almost everyone is surprised to find that Khilji has been lying all along unobtrusively in this well-known corner of the Capital. Most visitors to the tomb bear impressions of Khilji from the controversy-plagued Padmaavat. (Express Photo by Abhinav Saha)

A group of four young boys and girls can’t curb their excited giggles. One of the boys pulls out his cellphone, and shouts out to the others, “Arrey! Ranveer ka tomb aa gaya (See, Ranveer Singh’s tomb). Off-oh! I mean Alauddin Khilji, yaar.” All laugh, as they pose for selfies.

“Ranveer ne kya faadu acting kiya hai (Ranveer is just brilliant in the film)!” comments another, even as one of the girls rues that her parents did not allow her to go and watch Padmaavat in a theatre, fearing violence by Rajput groups protesting against it.

Still posing for photos, they talk about the film, “inspired by Malik Muhammad Jayasi’s fable Padmavat”, where Khilji, as portrayed by Ranveer Singh, is a barbaric womaniser with a voracious appetite for both food and sex.
Some more arrive, either unaware of the place where they are standing or only knowing that the structures are “very, very, very old”.

A man in a neat light blue shirt and dark blue trousers blows his whistle and admonishes a group of young men who like ferreting squirrels have climbed atop a nearby rectangular structure of stones. “Khaali photo khichwaane aatey hain yahan (They only people come to get their photos taken),” rebukes Sanjay Singh, one of the 70-odd guards employed by the Archaelogical Survey of India, who work in shifts for the upkeep of the Qutb Complex.

“On weekends, the World Heritage site records over 8,000 visitors. On weekdays, the number drops to half,” says Ashi, an employee at the token counter. From dawn, people begin to trickle in to watch the majestic Qutb Minar in the golden sunrise, and by dusk, their numbers have swelled to a steady stream.

Singh, who was deployed at the Qutb Complex four months ago by the private security firm he works for, and is originally from Munger, Bihar, adds, “These boys are all anibheeghya (ignorant), of both the past and the future. They climb anywhere, not even knowing if it is a masjid or a tomb.”

A group of foreigners, accompanied by a guide, now enter Khilji’s enclosure. His clients, who look tired, struggle to make out what he is saying, in broken English, over the roar of a Boeing aircraft flying overhead, on its way to the airport nearby.

The guide, a middle-aged man, narrates Khilji’s conquests and his passion for building grand monuments. “This used to be a college, an Islamic seminary, where students were taught. It was built by Alauddin Khilji,” he tells them.
Nearby, a group of Instagrammars, armed with their DSLR cameras and clumsy lens, look bemused.
“After he died, people used to pray at his tomb. Even now, people who want to offer prayers, come and silently say their prayers here,” the guide adds.

As he leaves with his foreign clients, the young men, who embellish their conversation with the number of followers they have on Instagram, look thoroughly confused at what they have just heard about Khilji. Finally, one of them tells another, with a sly wink, “Ye guide kuchch bhi bol dete hain firangiyon ko (These guides say just about anything to foreigners).”

While there are no signs of holiness around Khilji’s tomb now — no threads tied to walls — several “malfoozat (sayings of saints)” of that period refer to it as a place of pilgrimage where people tied threads seeking “mannat (their wishes)”. Sufi saint Nasiruddin Chiragh, a disciple of Nizamuddin Auliya and a contemporary of Khilji, wrote: “Mazhab ke baare mein kuchch nahi jaanta tha, par Khuda ko maanta tha (He didn’t know anything about religion, but he believed in God).”

Nasiruddin Chiragh’s accounts of Khilji’s market control policy, which made food items and articles of daily use available as well as affordable, give insight into his “transformation” from a regicide to this pir.

One can’t climb up the 379 stairs to the top of Qutb Minar now, but if one could, looking towards Delhi, one could see Hauz Khas on the left and Siri Fort area on the right — both contributions of Khilji. The Sultan built Hauz Khas to store water for Delhi’s simmering summer, while Siri was a city meant to mark the battlefield where he defeated the Mongols. To celebrate his victory, Khilji built a two-storey building with thousand pillars there, inspired by the Hindu temples of Madurai. Except the water tank, nothing exists now, but Hauz Khas and Siri Fort remain important landmarks on the Capital’s map. Percival Spear, an Englishman who taught history at Delhi’s St Stephen’s College in the1940s, wrote about the view from the top of Qutb Minar: “Except Rome, there is no finer view of historical buildings in the world.”

Within the Qutb Complex, lies Khilji’s incomplete but mammoth extant Alai Minar (imagined by him to be twice the size of Qutb Minar, which is still the world’s tallest brick minaret). The impressive Alai Darwaza, decorated with fringes of lotus buds and representing a new form of architecture, ‘Indo-Islamic’, was also built under him.

Back at the tomb, a seven-year-old keeps coaxing her father to tell her about the kings and queens and princes whose stories linger in the air all around, as two parakeets who have made their home in the wall’s cavities look on. As people climb up the pedestal, housing supposedly what is left of Alauddin’s tomb, for better pictures, the girl too wants to clamber on.

“No,” the father stops her. “Here a king was laid to rest. One should not walk over it and trample history.”

Master of Weaves: Designer Sanjay Garg on completing a decade in the industry