Govt, corporates can be allies in healthcare, says Chidambaram

Dr Reddy’s journey from his childhood to become one of the pioneers in corporate healthcare in India. 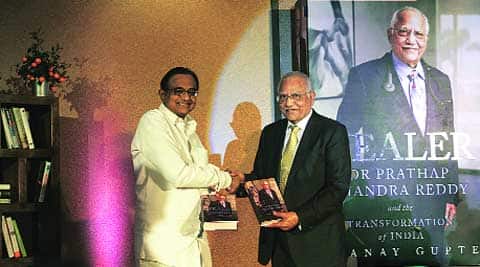 Dr Reddy’s journey from his childhood to become one of the pioneers in corporate healthcare in India.

Speaking after unveiling the book, Chidambaram said, “Apollo has emerged as one of the most successful models of healthcare in the world. I have spent a considerable time studying this model. Before this, there were three different models of healthcare in India — government, purely private and, charity or trust. For the longest time, the three did not interact, and viewed the others with fear and suspicion. Apollo was the first system to bring the three together, to show that the government can be an ally where the corporate sector is providing the healthcare, and individual doctors in hospitals are also enhancing their skills.”

Speaking at the event,Dr Reddy said, “The transformation of India’s healthcare and the Apollo story have just begun. There is a long way to go. I am thankful that I had the education and the luxury of going abroad, but I am so happy that I came back at my parents’ suggestion.”

Theatre personality Aamir Raza Hussain read out excerpts from Dr Reddy’s book and spoke about the many sides of the doctor-entrepreneur that “are not usually seen”. Dr Reddy’s four daughters also spoke on the occasion.