Delhi Police confirmed that Italia had been detained in the southeast district. 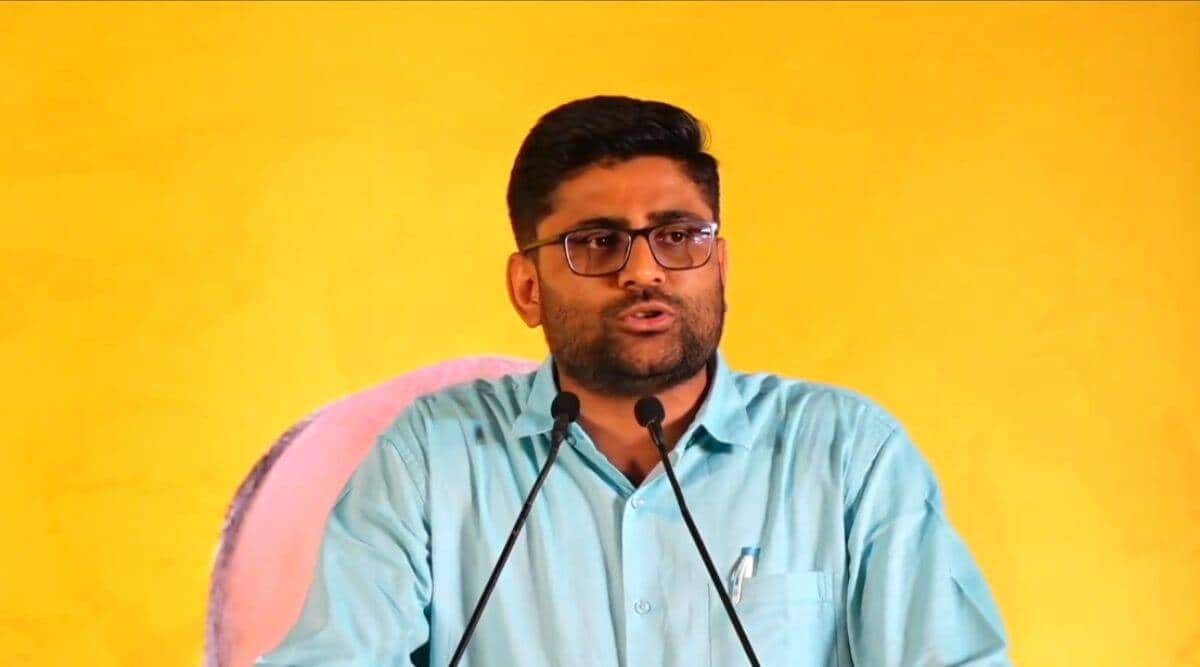 "Gopal Italia is a Patel (Patidar), he was associated with the Patidar agitation before. That is why I am being attacked. BJP is an anti-Patel party," said Italia during a press conference in Surat Monday. (file)

THE DELHI Police Thursday picked up AAP Gujarat unit president Gopal Italia from the office of the National Commission for Women (NCW) in Jasola and detained him for questioning for over two hours.

Police said they had detained him to “control the situation” outside the NCW office, where several AAP workers had gathered. “We received a call from NCW officials alleging that Italia’s supporters were creating a ruckus at the NCW office. We went to the spot and had to detain him to control the situation. He was released after two-and-a-half hours,” said a senior police officer.

The NCW, in a notice dated October 9, had summoned Italia at 12.30 pm over a purported video clip shared by BJP leader Tajinder Singh Bagga, in which the AAP leader is alleged to have used “an indecent word” for Prime Minister Narendra Modi. The notice said the “abusive language” used was “gender biased, misogynistic and extremely shameful, condemnable”.

In the purported video, Italia is alleged to have called the Prime Minister a “neech aadmi”, and also alluded to an abusive word. It is not clear when the video was filmed.

Over the past few days, another video clip of Italia, purportedly from 2018, has been shared on social media, in which he allegedly tells women that “temples and kathas (religious discourses) are breeding grounds of exploitation”.

Italia joined the AAP in June 2020; he was made the party’s state convener in December that year.

Addressing a press conference after his release, Italia alleged he was threatened by the NCW chairperson. “When I went to the NCW office, I knocked on the door of the chairperson’s office and asked if I could enter. She spoke to me disrespectfully and said she would put me in jail. She asked why people had gathered outside… The NCW was not interested in the topic of the summons… After a while, police were asked to take me away,” said Italia.

Asked what the police questioned him about, Italia said: “They said why are you getting involved in these things, why are you going against these powerful people… I requested them to take any legal action they had to and not to counsel me. My fight is against the corrupt, against the enemies of Patidars, against BJP. Put me in jail, hang me, or shoot me, I will keep fighting,” he said.

“They are wondering how a Patidar like me is challenging them. They hate Patidars… In Gujarat, 14 Patidar youths were murdered. Cases were filed against thousands of others… All central ministers, BJP leaders are talking about me. Why… My name is Gopal, God has blessed me. Main Gopal hoon aur main inn Kans ki aulaad se darne vaala nahi hoon,” he said.

The AAP, meanwhile, came out in Italia’s support. After he was taken for questioning, AAP chief and Delhi Chief Minister Arvind Kejriwal tweeted, “Patel community all over Gujarat is fuming with rage after the arrest of Gopal Italia. What has Gopal Italia done? Why has BJP left everything to attack him?”

Meanwhile, NCW chairperson Rekha Sharma said Italia appeared before the commission for the hearing along “with a crowd of 100-150 people who created a ruckus at the gate of the commission’s office”. “Taking in mind the safety and security of employees, mostly women and property of NCW, the commission had to call police to ensure law and order,” she added.

The commission in a statement added: “Mr Italia also refused to accept that the video concerned is his and insisted that it could have been edited. However, in his written submission, he did not deny his association with the video and stated that the alleged word could imply anything and in no sense, it can be attributed to be derogatory to women.”

Shruti Haasan recalls how ‘silent and violent’ Akshara Haasan beat up someone for her: ‘Next thing I hear is this man screaming…’