Police said prima facie the fire might have been a result of a short circuit, even though a report on the matter was awaited and investigations were at a preliminary stage. 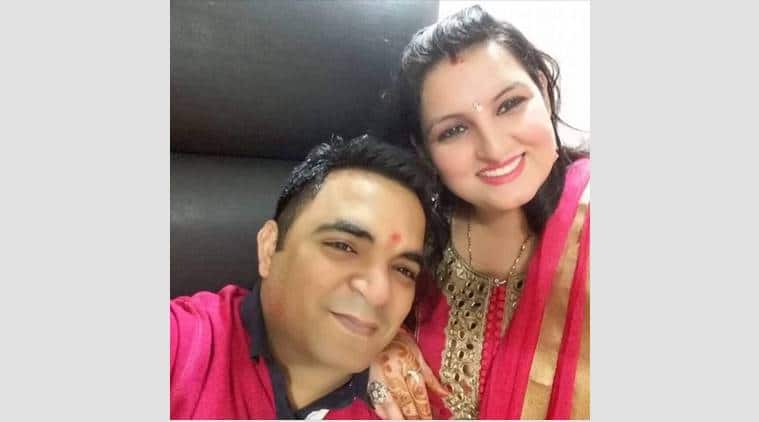 Police have identified the deceased as Rakesh Nagpal (40), his wife Tina Nagpal (37) and their seven-year-old son Himanshu and three-year-old daughter Shreya. (Express photo)

Four people of a family died after a fire broke out inside their house in north-west Delhi’s Pitampura area on Thursday night. Police have identified the deceased as Rakesh Nagpal (40), his wife Tina Nagpal (37) and their seven-year-old son Himanshu and three-year-old daughter Shreya. However, the Delhi Fire Service managed to rescue three other people, including an elderly woman, who are undergoing treatment at Ambedkar Hospital.

Police said prima facie the fire might have been a result of a short circuit, even though a report on the matter was awaited and investigations were at a preliminary stage. Their bodies were found near the staircase of the building and it is suspected that they suffocated to death, police said. (Express photo)

The fire broke out at House 484, Kohat Enclave, a three-storey building, which houses four families. When the blaze was reported at 2.48 am, more than 25 people were there inside the building. “We got information about the fire at 2:48 am. After ascertaining the volume and severity of the blaze, seven fire tenders were sent to the spot along with three other support vehicles, including a water bowser,” Chief Fire officer Atul Garg said.

Explaining the modus operandi of the operation, a DFS officer said while some managed to escape, the trapped people were taken out from the back exit of the building. “Some of the people had managed to escape, while those trapped were rescued by the firemen. The rescued people were taken out of the back exit of the building,” said a DFS officer.

The casualties could have been higher but for the alertness of the security guard, who immediately raised an alarm after he witnessed sparks from a electric meter at the ground floor. However, it is unclear why Nagpal and his family members, staying at the first floor, did not rush outside. Their bodies were found near the staircase of the building and it is suspected that they suffocated to death, police said.

Fire dept to assess claims that norms were violated

On the day he died, Rakesh Nagpal was supposed to accompany his brother, Ankit, to a destination wedding in Mussoorie. “A Ludhiana-based client had invited us for his son’s wedding. We were supposed to leave early morning, but he never answered my calls, nor did his wife. I went to their house and saw the building was on fire,” Ankit said. Just a few days ago, the Nagpal house was celebrating their daughter getting admission to GD Goenka School’s nursery class. “Who knew they would go like this,” said Vikas, a close friend of the family.

For an hour after the fire broke out, three families on the second floor tried desperately to escape the building — but only two managed to get out. Badlu, who has been working as a security guard at the building for over five years, claimed there were no fire extinguishers, smoke alarms, emergency hose reels or a motorised pump to harness water from.

The fire department is now checking if the building owner followed fire safety norms. “Everybody kept waiting for fire tenders. Even after firemen saved a few people, locals kept criticising them,” said Badlu. At the hospital where the post-mortem was conducted, Rakesh’s sister Anju broke down: “They told me my brother was sick. But he’s dead… he was the youngest.”

Also gathered at the hospital were more than 15 workers from the Chandni Chowk cloth market, where Rakesh ran a shop. “We never called him sir; he insisted we call him bhaiya. He would pay us advance salary and always hear out our problems,” said Hema, who worked with him. Annu, another employee, recalled playing with Rakesh’s two children at the shop. “They would teach us games so we could play with them,” she said.