🔴 The FIR was lodged on the complaint of Dinesh Thakur, convener, Jai Bharat Mata Vahini, who has been at the forefront of protests against namaz in public places in Gurgaon. 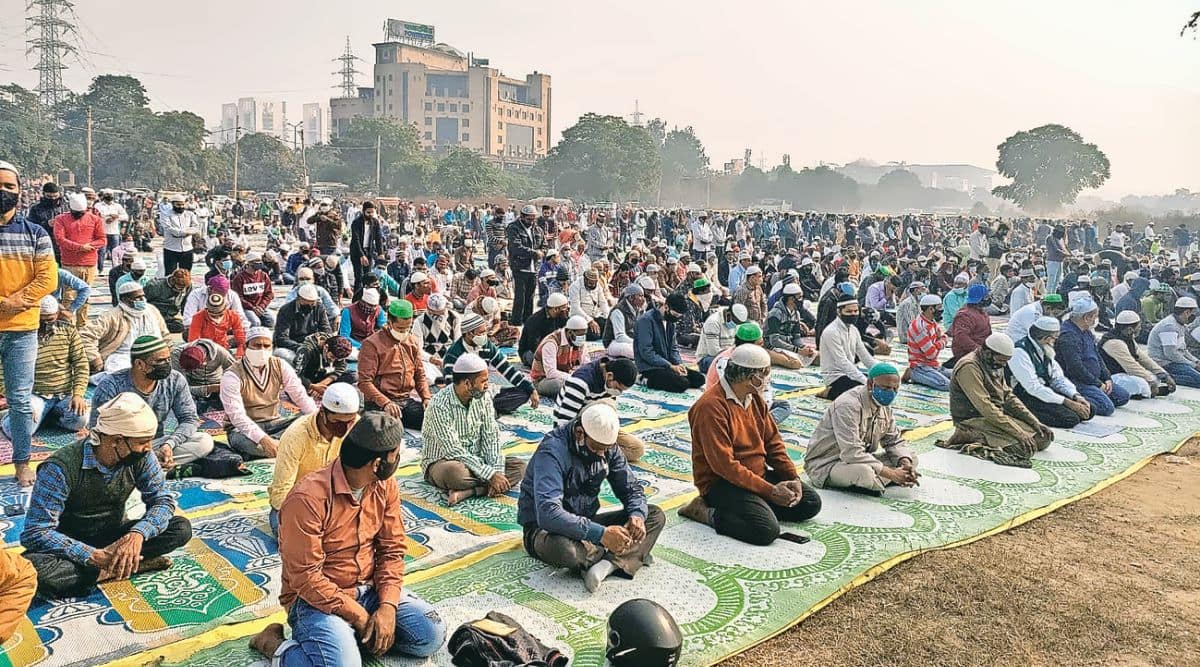 According to a video which has gone viral on social media, the Muslim students, a few of them wearing skull caps, offered Friday prayer inside a classroom in the afternoon. (File)

Police in Gurgaon Tuesday booked former Rajya Sabha MP Mohammad Adeeb, who had earlier moved the Supreme Court seeking contempt action against Haryana officials for failing to comply with directions passed by the top court regarding measures to be taken to curb communal sentiments. His plea in SC was in the context of namaz being disrupted at several places in Gurgaon. Officials against whom he had sought action included the Chief Secretary and the Director General of Police.

The FIR was lodged on the complaint of Dinesh Thakur, convener, Jai Bharat Mata Vahini, who has been at the forefront of protests against namaz in public places in Gurgaon. Thakur has been arrested thrice in recent months for allegedly promoting enmity between communities and under preventive measures.

Thakur alleged that Adeeb and the other accused were planning to build a mosque by encroaching land in sector 40 and trying to incite a riot.

“On January 2, I received information that at sector 40, where a security guard from Jharsa was laid to rest and a shrine (memorial) had been built, the accused were conspiring to construct a mosque thereby claiming the land to be part of a graveyard. By submitting some old khasra numbers, they are trying to mislead the government. The said land is under HUDA. We will not allow them to build a mosque there. The accused are trying to incite a riot by provoking sentiments of Hindus and Muslims. So, I filed a complaint so that this is investigated,” he said.

In the FIR, Thakur said, “In Gurgaon, the issue of namaz has been resolved after the statements of the Haryana Chief Minister. But, on January 2, one of the accused has been quoted in a Hindi newspaper that they will build a mosque on a plot at sector 40. I checked with locals, who informed me that the accused are trying to encroach the land… These people, who receive funding from abroad, are trying to incite riots in the country.”

Talking to The Indian Express, Adeeb said, “It is quite unfortunate and bizarre that the police have filed an FIR against me without checking any facts or conducting an enquiry. And that too on the complaint of a person who has criminal antecedents and has been arrested several times for promoting enmity between communities in Gurgaon. This is a vindictive and biased approach from the administration since I had filed a petition in SC questioning their failure to take action against people who have been disrupting Friday prayers in Gurgaon. It is bizarre that people who appeal for peace and harmony are being booked.”

Adeeb added, “If they think they will scare me through the FIR, they are misinformed. I want to know on what basis they have filed this FIR. I have never been to sector 40. I only go to the Anjuman masjid at sector 57 or at an eidgah for prayers… One policeman had called me yesterday saying he would come to meet me, but he did not show up.”

Mufti Mohammad Saleem Qasmi, who has also been named in the FIR, said, “It is shocking that the police have filed an FIR against me. This is an attempt to stifle our voice. But we will not be cowed. We have filed several complaints against this complainant, who has been disrupting prayers and giving hate speeches for the past few months, but no action was taken.”

Kuldeep Singh, SHO, sector 40 police station, said, “An FIR has been registered. The complainant had cited a news report in which certain statements had been made by one of the accused, which could disturb harmony. Two more people, including a former MP, have been named in the FIR. The matter will be investigated.”

In his petition before the SC, Adeeb, a Gurgaon resident, had submitted: “In the few recent months, there has been a constant rise in incidents revolving around the said Friday prayers at the behest of certain identifiable hooligans, with no local support, who portray themselves falsely in the name of religion and seek to create an atmosphere of hatred and prejudice against one community across the city. While various complaints were given by different persons intimating how a certain group of unruly elements are creating such a hateful environment every Friday, no action was taken by the police. Even when the police remained present, little to no efforts were made by effectively controlling such elements by making arrests and prosecuting such persons as per the directions given by the Hon’ble court.”

To sustain momentum in exports, government must reorient trade policy, steer away from protectionism