Accountant to farmer to event manager: The women and men who spent a year at Singhu

While most farmers have shuffled between Singhu and their homes in Punjab or Haryana, there are some who have remained here without a break, with their lives on hold. 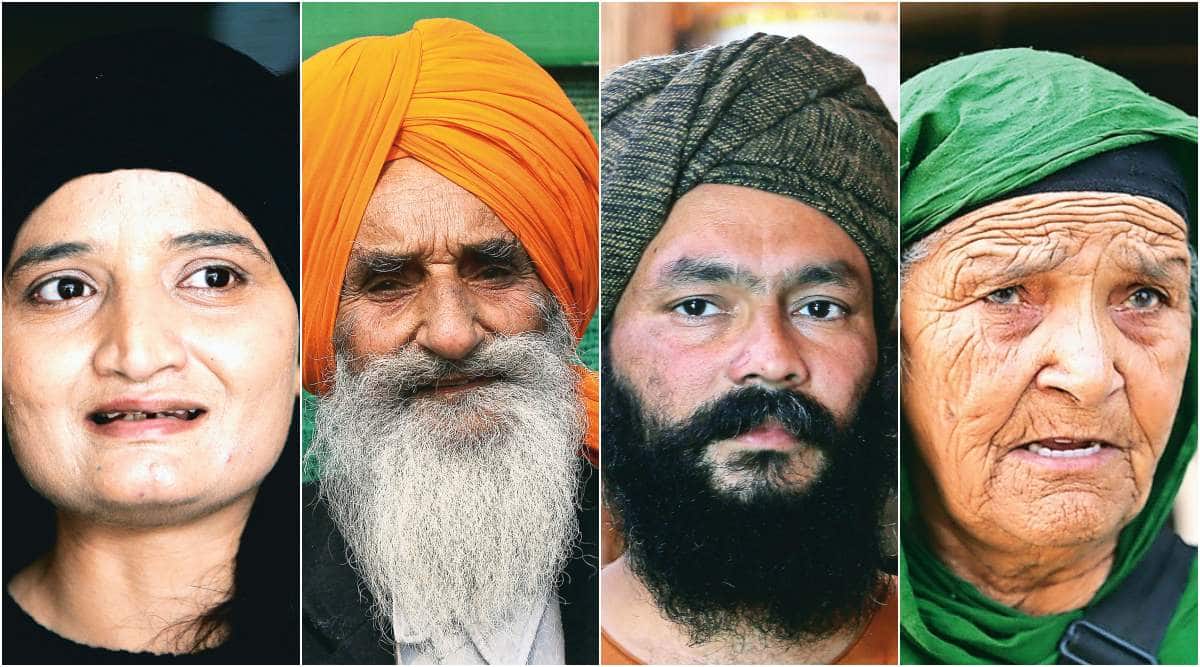 The announcement by Prime Minister Narendra Modi sent a wave of jubilation at the Singhu protest site on Delhi’s border, where protesters have been camped since November 26 last year, refusing to budge until the farm laws are repealed. And while most have shuffled between Singhu and their homes in Punjab or Haryana, there are some who have remained here without a break, with their lives on hold.

An accountant from Morinda in Mohali, Sukhmani is one of the youngest people volunteering at the main stage at Singhu, from where farm leaders address the crowd. She arrived in December last year — and hasn’t gone back since.

“ I worked in Chandigarh and lived alone. I saw the farm protests on TV one day, and requested my parents to let me come here. I couldn’t see old farmers being beaten up and struggling in winters. My father said no, but I waited and asked him again. I told him I’ll be gone for just a few weeks.”

Sukhmani took a bus from Mohali, and once at the border protest site, worked briefly with Khalsa Aid. She then joined the Samyukt Kisan Morcha, cleaning the stage at 7 am and serving tea and snacks till 7 pm.

“When I stepped into the bus, I took an oath that I won’t return unless the elderly farmers leave too. After a few months, my mother called and asked me to come home. I said no. I speak with my parents over the phone but not on video call — it’s not easy… I end up crying when they beg me to come back,” said Sukhmani, whose father is a property dealer and mother a teacher. A tattoo on her hand says ‘I’ll always love you mom and dad’.

“I was doing the paath today morning when a farmer came and said that the prime minister will repeal the laws. I’m both happy and a little sad — I like doing sewa,” she said. “Fateh ho gayi, par ye aadhi jeet hai.”

A resident of Tarn Taran, Punjab, he left for Delhi from his village of Gharga Dara on November 26 last year with a group of farmers. The following day, he suffered eight stitches and a clot in his left eye after a teargas shell hit him when security forces tried to contain protesters at Singhu. Singh has remained at the protest site ever since.

He recalled “sitting peacefully” that day when the teargas and water cannons started. “I returned to the protest site after first aid — I am not scared of bullets or shells.”

“I vowed when I left my village that I will only return when the farm laws are repealed. Ye hamaare hakk ki ladai hai (this is a fight for our rights). If I return, how will I face the future generations? More than 700 farmers have died during this agitation — my sacrifice is small in comparison,” said Singh, who owns 7 acres of land where he cultivates wheat and paddy.

On Thursday, a day before the PM’s announcement, he had said, “A major regret I feel is that the government is not listening to the farmers.”

Singh has four children and two grandchildren. “I miss my youngest grandson, who is 10, the most. He keeps asking me to return, but I am here to do sewa,” said Singh, whose daily routine involves serving langar.

Friday’s news reached him from his son — over the phone. “This is a victory of truth, a huge victory for our movement, but we are not getting carried away. This could just be a jumla… for the upcoming elections. Till the government gives it in writing and the bills are repealed in Parliament, we will stay put. I am ready to sit here for another year.”

“My friends and I had planned to visit Singhu and return after a few days. I ran an event management company in Chandigarh and didn’t know much about farmers. Now, these people are my family. It’s almost been a year and I have a home here now. I will leave 3-5 days after protesters have left,” said Pal.

Pal left Anandpur Sahib on November 15 last year with a group of 30-35 men. They reached Singhu after 12 days. The first thing he saw were farmers with dirty footwear, and decided to open a ‘langar’ to polish shoes.

The group set up a small tent near the main stage and polished shoes for days. Pal said he then saw old farmers with age-related health issues and wanted to help. So, a ‘massage langar’ was started.

“There were days we were massaging 2,000 farmers a day. There are people here who protest and know about farm laws. I am only here to help. I still remember the calls from my daughter, who is 11, and my father. Initially, everyone wanted me back. But when they came here, they realised I can’t leave the sewa — my father told me he would disown me if I did. He’s a retired Army officer and calls me a soldier,” said Pal, who has been using his savings to buy groceries for the langar.

For two months after the farm bills were enacted in September 2020, Grewal went to several villages in his tehsil, Raikot in Ludhiana, on a motorcycle to spread awareness about their impact.

“I saw in several villages that the youth were volunteering to take part in a march to Delhi. I thought, why should the bazurg (elderly) not lead? With over 70 people and some rations, we took trolleys on rent for Rs 40,000 and left for Delhi on November 25, at 4.15 pm. At Shambhu border and at Karnal, security forces tried to stop us, but we continued to march. When CRPF fired teargas shells at Singhu on November 26, I went to the front and told them to fire at me first. The officers stopped,” said Grewal, who owns over 1.5 acres of land.

Since coming to Singhu border, Grewal has been doing sewa, and has only returned to his village once, that too for just an hour when his wife was ill, he said.

“I had assumed the protest would end in a few days and we would return. But my two sons told me to stay put — they said I am protesting for the entire village and making them proud.”

Grewal said that on Friday morning, people were making langar preparations for Guru Nanak’s birthday celebrations when the news came in.

“I broke into a jig and started doing sit-ups. We have sacrificed a lot — many farmers have died, have left behind jobs, families… But we are undeterred and will continue to sit here till the government gives in writing that laws will be repealed, about the MSP guarantee… Politicians promise a lot of things, and state elections are round the corner. We have given a call for November 26, when the protest will complete one year, and farmers from all over Punjab are coming to Singhu. I am staying put,” said Grewal.

Also Read |A tale of 2 rollbacks: land and farm laws, focus was outcome, not the process

A resident of village Chaunda in Sangrur, she arrived at Singhu border on January 4 with a group of women protesters from her village.

“I started volunteering at a langar, making chapatis. Initially, we faced inconvenience in accessing washrooms and had to walk for kilometres. But for farmers, hardship is a way of life. Since I came here, I have gone back to the village twice for some errands. My husband and sons passed away years ago. My grandsons often ask me to return, but I will only go after the laws are repealed,” she said on Thursday, a day before the announcement.

On Friday, she said, “This is a victory for us… the government has bowed. I will continue doing sewa till the morcha leaders decide about our return. Even then, it will take months to pack up ration supplies and clean the area around Singhu.”

The Ludhiana resident had followed his brother, Prince Sandhu (30), to Singhu. The brothers bought three washing machines so farmers could wash clothes.

“Prince is a farmer and came here in November. I came a month later and wanted to go back home after a week, but it’s now been 10 months. I saw protesters, old and handicapped, washing their own clothes. They had joint pain and other issues. We had to help them and bought the machines. This is not a protest where you come and leave,” he said.

The brothers washed more than 500 clothes every day; after some time, two people from Delhi donated two more machines.

“My sister and relatives had started looking for a bride for me, but I refused to go back. I won’t get married until the farmers leave from here,” he said.