All these water-ATMs are powered by solar energy and are connected to the main server via cloud computing. 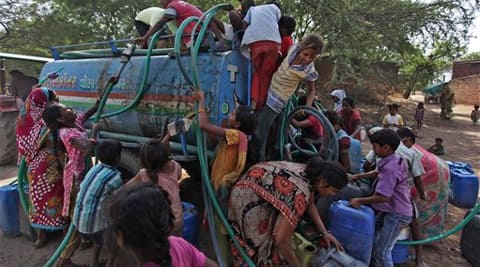 Soon residents of the resettlement colonies in the national capital would be able to draw water from water-ATMs paying a token amount of 30 paise under a new initiative by the Delhi Jal Board (DJB).

The DJB, in collaboration with the Delhi Urban Shelter Improvement Board (DUSIB), recently launched a pilot project at Savda Ghevra, a resettlement colony in Southwest Delhi.

As a part of the project, a decentralised water treatment plant has been installed to extract the ground water which then is purified through reverse osmosis system and then provided to the people through 15 water-ATM kiosks.

The residents of the colony are drawing one litre of water from 2 ATMs installed at the plant itself by paying 15 paise and from 13 other kiosks at the cost of 30 paise using smart cards which are called Sarvajal cards.

Encouraged by the success of the plant, Delhi’s Lt Governor Najeeb Jung recently cleared a proposal of installing ten more such plants in 10 other colonies on a trial basis.

All these water-ATMs are powered by solar energy and are connected to the main server via cloud computing.

“There is a tanker of 500 litre water installed on the top of each ATM and people draw water from them using smart cards which can be recharged at the main treatment plant. Whenever the waters level in the tanker reduces to 200 litres, a message is automatically sent to the main server following which they are again refilled. At a time, a customer can draw upto 20 litres of water,” said V K Babbar, technical advisor of DJB.

Savda Ghevra in West Delhi is a home to at least 7,500 families and according to the DJB officials, nearly 850 families at present are using the facility.

These water kiosks were installed in this colony by the Piramal Foundation, the philanthropic arm of Piramal Group, under its Sarvajal project after it won a tender floated by the DJB.

These resettlement colonies do not get piped water supply and the groundwater is unfit for consumption.