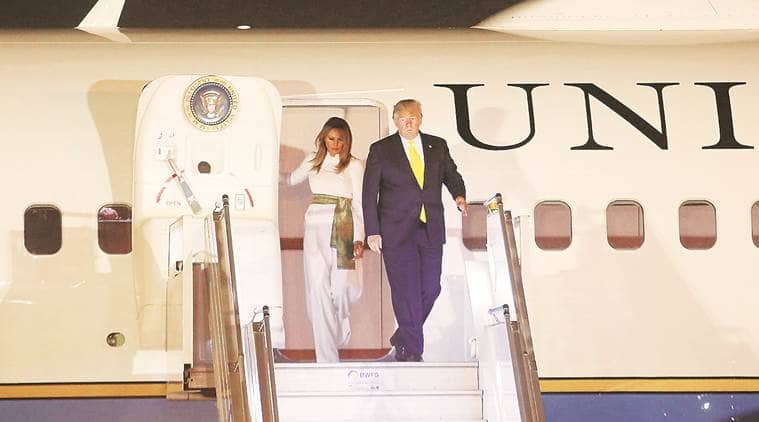 The US President landed in the capital on Monday night. (Express Photo: Anil Sharma)

While the initial security plan involved blocking traffic movement on only one carriageway outside Hotel ITC Maurya Sheraton — where the US president checked in on Monday evening —police have now decided to stop traffic movement on both carriageways minutes before Trump’s cavalcade departs from the hotel. Follow Donald Trump India Visit LIVE Updates

Sources told The Indian Express that they have received specific inputs that a few people want to stage a protest in the area. “Following some inputs, police decided to impose Section 144 in Southwest, New Delhi and Central districts where Trump will go on Tuesday. Earlier, we had decided to stop traffic movement only after his cavalcade leaves the hotel, but now it has been decided to stop traffic movement on both carriageways minutes before his departure from the hotel and also deploy police personnel in plainclothes along the route,” said police sources.

An officer said they have now decided to deploy spotters — called in from conflicts zones in the country and used to identify terrorist elements in crowds — and 20 teams of Delhi Police and paramilitary personnel to handle protesters, if they arrive in New Delhi and Central districts.

As per schedule, the US President will leave from the hotel for Rajghat in the morning and then to Hyderabad House, before returning. Later, he will go to Rashtrapati Bhavan and from there, he will leave for the airport. “In the Central district, police deployment has been increased. Personnel have been deployed from Monday night to avoid any untoward incident,” said a senior officer.

Delhi Police has already installed high-definition CCTVs with night vision in the Central Ridge area across the hotel to monitor the situation round-the-clock.

“On Saturday, an ‘advance security liaison meeting’ was held in the basement of a hotel for around two hours, where security agencies informed them that they have decided to deploy anti-drone detachment of NSG, NSG snipers, elite SWAT commandos, and kite catchers during his arrival, and also around the hotel where he is staying. It was also informed that they would deploy an IAF chopper during Trump’s movement in Delhi,” police sources said.

Police have also installed high-definition licence plate recognition cameras at strategic locations on the stretch along the hotel.

After day of violence, night of fear in Northeast Delhi