On Wednesday, Delhi Health Minister Satyendar Jain had directed private hospitals to increase their bed capacity by 10-20 per cent as soon as possible to treat dengue patients. 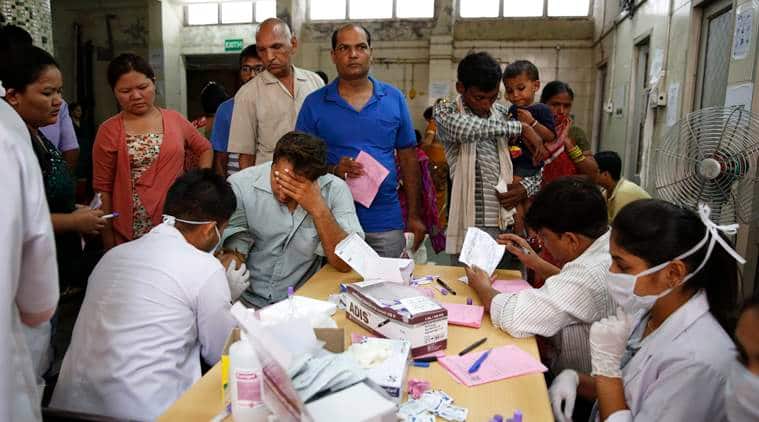 People suffering from fever get their blood test for dengue at a fever clinic run by a government hospital in New Delhi on Sept. 17, 2015. The national capital struggles with its worst outbreak of the dengue fever in five years. (Source: AP photo)

Dengue scare in the national capital escalated today with a three-year-old girl becoming the 15th victim on the list of dead as the number of people down with the mosquito-borne fever crossed 2,000.

Delhi Government, which has been accused of not effectively dealing with the situation, said it was mulling bringing an ordinance to punish private hospitals refusing to provide treatment to patients in emergency situations.

Little Neha died on Wednesday at the Saket City hospital and her distraught parents alleged that one government hospital and a private nursing home in South Delhi did not provide proper treatment for dengue to her.

Neha, a resident of Sangam Vihar area, is the third child to die of dengue in the city allegedly due to medical negligence.

As hospitals continued to be flooded with dengue patients, municipal officials said the total number of cases crossed the 2,000-mark this year out of which around 1200 were reported in the last two weeks.

Officials said the new Ordinance may have provisions for cancellation of registration of hospitals violating government’s directive.

As dengue cases continued to surge, the Aam Aadmi Party said it will set up “fever clinics” across Delhi to offer free treatment to the patients. The ruling party accused the BJP- ruled civic bodies of “total failure” in containing spread of the vector-borne disease.