Delhi to Madhubani on a cart: ‘Would not have survived lockdown’

Around 3 pm on March 23, the day Chief Minister Arvind Kejriwal implemented the lockdown in Delhi, around 50 porters from Sadar Bazaar, Azad Market, and Bhagirath Palace decided to cycle back to their villages in Bihar. 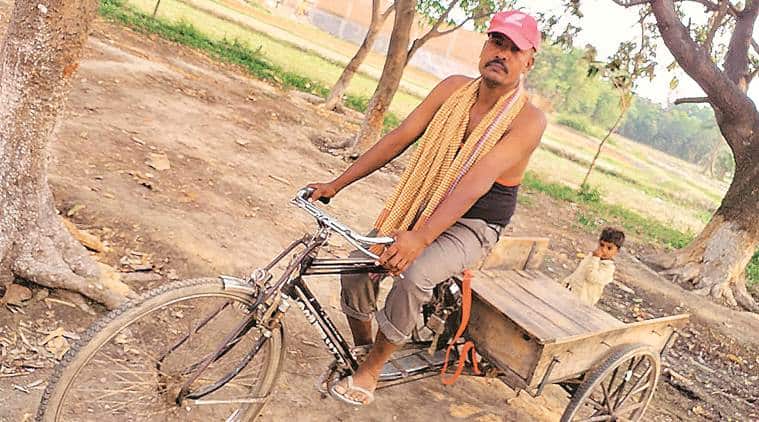 “Bure waqt mein insaan ghar hi toh jaata hai, issme itni chaukaane wali kya baat hai (One heads home during tough times, what’s so surprising about that)?” asks Mohd Samirul, speaking over the phone from Umgaon village in Bihar’s Madhubani district. The 38-year-old father of four, a porter in Delhi’s Sadar Bazaar, can’t understand the fuss around his journey back home from the national capital to his village — 1,180 km away — in a thela (wooden cart) that he cycled for nine days.

Around 3 pm on March 23, the day Chief Minister Arvind Kejriwal implemented the lockdown in Delhi, around 50 porters from Sadar Bazaar, Azad Market and Bhagirath Palace decided to cycle back to their villages in Bihar. Samirul was one of them. On March 25, when the nationwide lockdown began, the group was still on their way back home, unaware for several hours as they pedalled their way across towns.

“I packed two blankets, my Nokia phone and charger, a jug to fill water and Rs 700, and left in the evening. There was no other option. We were okay with the one-day lockdown on March 22, but when they extended it, I knew I wouldn’t survive it. If we don’t earn, how will we eat? On March 26, we found out that the lockdown had been implemented in the whole country and that even back home there will be no work. That was sad, but we know it’s needed to stop this disease,” he says.

Read | ‘Consider pandemic extinguished only when it subsides worldwide’

On March 30, he reached his village, Umgaon in Madhubani district, and was put in quarantine for 14 days at a medical college nearby. “The children visited me daily with chai and breakfast, which they would keep on the floor outside. On April 13, I finally entered my house,” he says.

Samirul moved to Delhi in search of work 19 years ago. Having never been to school, he felt being a wage labourer was his only option, and big markets in the capital looked for young men like him who could toil for long hours. By 2002, Samirul had found a footing in Azad market as a porter. “I earn Rs 200 a day, sometimes Rs 500, sometimes nothing at all. I carry stacks of geometry boxes from godowns to shops, from shops to other shops in Sadar Bazaar and Azad Market. If I don’t get work for two days in a row, I have to sleep hungry… This lockdown was for weeks, how would I have survived?” he says.

Also Read | Home at last: ‘Will never step out of Assam again’

On March 23, Samirul left from Sadar Bazaar with other thelawalas and reached Kashmere Gate ISBT. From there, the men cycled to UP’s Ghaziabad, then Etawah, Kanpur, Lucknow and Gorakhpur. From there, they entered Bihar’s Gopalganj, then Muzaffarpur, and Darbhanga before parting ways.

Four days after Samirul stepped into his home, former Congress leader Shakeel Ahmad visited the family and gave them 25-kg ration. “For now, it’s enough, but we want to work. I have no agricultural land, I am just a daily wager. When this is over, I will go back to Delhi with my cart,” he says.

It was three months ago that Samirul had bought the thela for Rs 4,500, and this was his means of earning a livelihood as well as a home in Delhi. With no roof over his head, he is one of the hundreds who sleep on the footpath or their carts outside shops in Sadar Bazaar and Azad Market.

“I slept in it, I kept all my belongings on it, and cooked on the footpath. Due to the disease, there was very little work anyway, and I was running out of food supplies and money. I only had enough to survive two days. I didn’t know who would feed me,” he says.

As Samirul and the other men traversed across towns and villages, empty highways and roads, they were only stopped by police for temperature checks, and sometimes even offered food. “No one stopped us, they knew we had nowhere to go except home. The policemen have homes and families, after all. Some would use a machine to check for fever, others would tell us where to get food — sometimes outside a school nearby. Police and volunteers would tell us to sit far away from each other and eat. Police told us that we shouldn’t go home straight away. They told us to call the village pradhan and tell him we were en route, so we could be kept away from everyone for 14 days. There were so many of us that we found support in each other — we were neither sad nor bored. Haste-gaate pahuch gaye Darbhanga tak (We laughed and sang our way to Darbhanga),” says Samirul.

For three-four hours, at a stretch, the group would ride the cart, and then stop for water and food or to rest.

After Darbhanga, many of them went towards Samastipur, while Samirul cycled alone till his village. “My work in Delhi is such that the sun doesn’t sting, sweat doesn’t bother me and I don’t tire easily. We are the thelawalas of Sadar Bazaar; we have endured far harsher challenges, this was easy in comparison,” he says.