Meanwhile, Delhi reported its fifth monkeypox case with a 22-year-old African woman testing positive for the infection, official sources said on Saturday.The woman had travelled to Nigeria a month ago. She was admitted to LNJP Hospital two days ago and her reports came out on Friday night, confirming that she was positive.

In other news, senior farm leader Gurnam Singh Charuni was among the farmers detained in Manesar on Saturday as they blockaded National Highway-48 leading to traffic congestion. The farmers are protesting against the proposed acquisition of 1,810 acre land of three villages in Manesar and demanding that they should be paid due compensation.

Former minister and Samajwadi Party Member of the Legislative Council (MLC) Swami Prasad Maurya has sent a defamation notice to Noida police commissioner Alok Singh, days after latter told media that Shrikant Tyagi, who was booked by police last week after he was caught on video pushing and abusing a woman at a residential society in Noida, had claimed that he had got the “vidhayak” (MLA) sticker on one of his vehicles “through Maurya”. Tyagi was arrested by the police on Tuesday.

In the notice, Maurya’s lawyer has sought compensation of Rs 11.5 crore along with an unconditional apology from Singh. Read More

Delhi Gymkhana director, BJP general secretary Kuljeet Singh Chahal, and 5 other club members were booked for taking out a march without any permission when the deployment of VIP carcade rehearsal was in place. An FIR has been registered under IPC sections 186 & 188 at Tughlak Road police station, DCP Amrutha Guguloth said.

Saxena reiterated his commitment to ensure upgradation of all primary schools run by the civic body by the year-end.

"Launch of 15 smart schools is the beginning of a new chapter which will fully unfold, with all schools of the MCD becoming the best in their category," Saxena said on the occasion. (PTI)

In Pics: Partially submerged houses in the floodplains of the swollen Yamuna river A local court hearing a case related to the 2020 northeast Delhi riots expressed dissatisfaction with public prosecutors appearing on an ad hoc basis.

The judge directed the Commissioner of Police to ensure "appointment and regular appearance of a prosecutor in this case".
The judge's observation came after a Special Public Prosecutor (SPP) submitted that he was appearing in the case on an ad hoc basis without any concrete order from the police department.

"The matter is referred to the Commissioner of Police to get enquired as to why a proper regular public prosecutor for this case was not ordered till date in the backdrop of the fact that the previous prosecutor stopped appearing in the matter," Additional Sessions Judge Pulastya Pramachala said in an order passed on August 4. (PTI)

The woman had travelled to Nigeria a month ago.

She was admitted to LNJP Hospital two days ago and her reports came out on Friday night, confirming that she was positive.

She is the second woman in the national capital to contract the infection.

Four persons, including two women, are admitted to the LNJP Hospital with monkeypox while one patient was discharged from the facility. (PTI)

Police said on Saturday that they had arrested four men from Begumpur and Bawana for allegedly stabbing to death a 25-year-old in south Delhi after an argument about his urinating near a public wall.

According to the Malviya Nagar police, Mayank Panwar, a resident of Shahpur Jat and a hotel management graduate, was attacked on Thursday evening at Gate No. 3 of the DDA Market in Begumpur by four people, who first picked an argument with him and later, as he and his friend Vikas tried to run away, chased the duo. While Vikas managed to escape, Mayank was allegedly overpowered and stabbed many times in the stomach by Manish (19), the main accused. Read More

Several farmers have been detained and the traffic in NH-48 is now clear.

According to police sources, Haryana farmer leader Gurnam Singh Charuni is among the farmers detained.

#LIVE | The farmers are protesting the proposed acquisition of 1,810 acre land of three villages in Manesar and demanding that they should be paid due compensation.

Traffic congestion has been reported on both the carriageways of National Highway - 48 at Pachgaon Chowk after farmers from nearby villages of Manesar blocked the highway.

The farmers are protesting the proposed acquisition of 1,810 acre land of three villages in Manesar and demanding that they should be paid due compensation.

#LIVE | The farmers are protesting the proposed acquisition of 1,810 acre land of three villages in Manesar and demanding that they should be paid due compensation.

A youth was arrested in Haryana’s Rohtak for allegedly stabbing his widowed mother multiple times and strangling her to death after he suspected her to be in a relationship with another man, the Gurgaon police said Saturday.

Officers said that they received information at the police post in Sector 93 on Wednesday regarding a stench that seemed to be coming from a room locked from the outside in Garhi village. When the lock was broken, the police team found the decomposing body of a woman lying underneath a cot in the room, they said.

The victim’s brother identified the deceased as Sona Devi, 40, and said he suspected the role of her son Pravesh, 20, in the murder, the police revealed, adding that Pravesh was arrested on Thursday. Read more here

Very light rainfall and thundershowers in the afternoon or evening are on the weather forecast for Delhi on Saturday.

The DMRC said in an update at around 11.30 am that all gates are open for entry and exit at ITO, Lal Quila, Jama Masjid and Delhi Gate Metro stations.

The Delhi Crime Branch on Friday arrested six men from Outer District for allegedly siphoning fuel from tankers and selling it at several locations across the national capital.

Police said that the owner of one of the tankers and a fuel station, Aradhana Sapehia, arrived at the spot, and gave a complaint to the police. The complainant said that the station used the tanker to get oil from a depot at Tikri to the pump. The accused, Chandrika and Anil, had been working for them for five years, and the complainant had suspected them of fuel theft because of the discrepancy in oil pumped at the station and depot respectively, Sapehia told the police. However, the accused allegedly denied it, and it could not be proven as the tanker had an automatic locking mechanism. Read more here

Meanwhile, parking facilities will not be available at Delhi metro stations from 6 am on Sunday to 2 pm on Monday due to Independence Day security arrangements, the DMRC said in a statement issued on Friday. Metro train services will, however, continue to run as per normal schedule.

The water level of the Yamuna, which is flowing above the ‘danger’ mark, is likely to remain above the danger level till Saturday evening, according to a Central Water Commission (CWC) forecast.

The water level at the Old Railway Bridge was 205.97 m at 9 am on Saturday, when the ‘danger’ level is 205.33 m. The level is set to reach 206 m by around 6 pm on Saturday. It is likely to remain stable at this level till around 7 pm, before decreasing, as per a communication from the East Delhi district administration.

Evacuation from parts of the floodplain is underway, according to officials in the East Delhi district administration. Tents have already been set up near NH-24 and Preet Vihar. “Camps have been set up at three places, more are being arranged. Arrangements were made in a school as well, but people have refused to move to the school. We will assess this once more later in the morning and see how many people have left the floodplains,” said Puneet Patel, additional district magistrate, East Delhi. Read more here 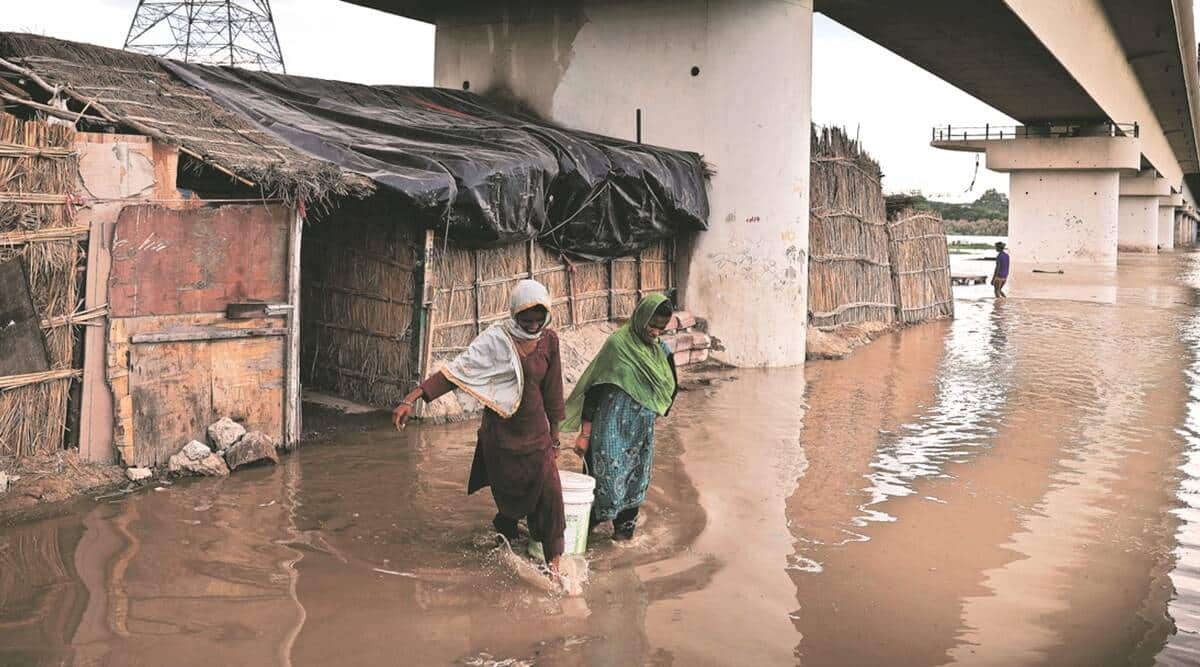 Rifleman Manoj Kumar Bhati, 26, of Rajputana Rifles was among four soldiers who were killed in a militant attack on an Army camp in Rajouri district of J&K in the early hours of Thursday.

“Dukh toh hai par garv bi hai ki mera beta desh ke liye shaheed hua [There is sadness but I am also proud that my son sacrificed his life for the country]. He and fellow martyrs killed two terrorists and saved the unit…Since childhood, it was his dream to join the Army,” said his father, Babulal Kumar, a farmer. Read the full story here The “lackadaisical and abhorrently unprofessional approach” of the Delhi Development Authority (DDA) is “unpardonable”, the Delhi High Court has said while rapping the planning authority for failing to hand over a plot in Rohini to an octogenarian woman, who had applied for it in 1981 and got an allotment letter in 1991.

Upholding a single-bench decision directing the DDA to hand over a 60 sq. metres plot to the woman within four weeks, the division bench of Chief Justice Satish Chandra Sharma and Justice Subramonium Prasad said that the facts of the case only demonstrate the harassment of “a poor lady” at the hands of DDA for reasons best known to the officers concerned.

“In view of the harassment caused to the respondent by the DDA for over 30 years and for wasting precious judicial time by filing the instant frivolous appeal, this court is inclined to impose costs of Rs 50,000 on the DDA,” said the court. Read more here

Security agencies are facing a peculiar problem ahead of Independence Day – of ensuring the Red Fort remains monkey-free when Prime Minister Narendra Modi addresses the nation from its ramparts and hoists the tricolour on August 15.

Around 10 trained monkey catchers employed by the municipal corporation and eight by the Delhi government’s district conservator of forest office have been working for the last 48 hours after intelligence agencies flagged the presence of monkeys on the premises during Independence Day rehearsal on Friday morning. Not just Red Fort, officials of the Central district are also combing Rajghat, which too will be visited by the PM, to make sure it is free of monkeys.

Usually, the civic body removes stray dogs from the premises before Independence Day and Delhi Police deploys men who imitate sounds made by langurs to scare monkeys away. “I have been working for the police for the last 10 years. Every Independence Day, they deploy me and seven members of my team at Red Fort for around 10 days. We imitate langur sounds, and the monkeys leave. This time, agencies have also deployed dedicated monkey catchers alongside us,” said Ravi Kumar, a ‘monkey expert’. Read the full report here According to SpiceJet, the video -- in which Kataria is seen lying down on the aircraft seat and lighting a cigarette and taking a couple of puffs -- was shot on January 20, 2022. (Photo: Videograb/Twitter@Nitish_nicks)

After a video of a social media influencer and bodybuilder Bobby Kataria alias Balwant Kataria from Gurgaon lighting a cigarette inside a SpiceJet aircraft was shared by several people on social media, Union Civil Aviation Minister Jyotiraditya Scindia has ordered an investigation into the matter.

“Investigating it. There will be no tolerance towards such hazardous behaviour,” Scindia tweeted Thursday.

In the video Kataria is seen lying down on the aircraft seat and lighting a cigarette and taking a couple of puffs, posing safety risks.

SpiceJet Thursday issued a statement saying that the video was old and they have filed a complaint in the matter. The statement also said that Kataria had been put on the ‘no-flying’ list for a period of 15 days in February.

The Gurugram police, meanwhile, said they had received the complaint but did not have jurisdiction over the matter.