Delhi News Highlights: The number of new Covid cases has gone down in Delhi further, with the national capital recording 928 fresh infections on Wednesday. Three virus-related fatalities were also reported during the day, which saw 1,466 patients recovering from the disease. The positivity rate is now at 7.08 per cent.

The Delhi University has announced it will conduct a second phase of semester examinations for students of undergraduate and postgraduate courses who could not take the paper previously due to the COVID-19 pandemic and other reasons. In a notification issued on Tuesday, the university said the registration for the examination will begin from June 29.

A new solar cooking system, developed by Indian Oil’s Research and Development wing, is currently being tested at 60 locations in the country, and its use is likely to be scaled up soon.

Speaking at a demonstration on the indoor solar cooking system, called Surya Nutan, Hardeep Singh Puri, the Minister of Petroleum and Natural Gas and Minister of Housing and Urban Affairs, said, “This is a revolutionary step, a complete paradigm shift. If the idea is taken forward well and if there is commercial exploitation, the private sector will join in. There are so many households, the cost will come down.” Read more

Delhi Deputy Chief Minister Manish Sisodia conducted a surprise inspection of the road stretch between ITO and Tilak Bridge on Wednesday and reprimanded officials over its non-maintenance, according to an official statement.

Sisodia also asked the officials to prepare a beautification and street-scaping plan for the road stretch in accordance with global standards within a week, the statement said.

He reprimanded the officials concerned over the non-maintenance of the road stretch and the foot overbridges as also on road aesthetics. (PTI)

After a post on the AAP’s Facebook page featured his photo with the caption “Most Corrupt Persons of Punjab”, National Commission for Minorities Chairperson Sardar Iqbal Singh Lalpura sent a legal notice on Wednesday to Punjab Chief Minister Bhagwant Singh Mann and Delhi Chief Minister Arvind Kejriwal, demanding that the party issue a public apology and pay compensation.

Though the post has since been taken down, Lalpura has demanded the removal of “false publishing from all social media’’ as well as an unconditional apology in print, digital and social media platforms, along with a “corrigendum clarifying the correct facts’’. Read more

The number of new Covid cases has gone down in Delhi further, with the national capital recording 928 fresh infections on Wednesday. Three virus-related fatalities were also reported during the day, which saw 1,466 patients recovering from the disease. The positivity rate is now at 7.08 per cent.

The Delhi government is likely to hold a meeting with market associations and women entrepreneurs next week to address their queries on the Dilli Bazaar portal.

Delhi government's ambitious "Dilli Bazaar" e-portal that will enable shoppers across the globe to have a virtual tour of the city's key markets and shop on the lines of other e-commerce platforms will go live in December with 10,000 vendors.

Ahead of the launch, the government will hold a slew of meetings with traders and market associations to know their concerns and address their queries, officials said. The first such meeting is likely to be held in the next week. (PTI)

The move reflected LG Saxena's commitment to zero tolerance to corruption and ensuring probity in the functioning of the government, one of the sources said. (PTI)

Power discom TPDDL will hold a special Lok Adalat on June 26 in association with the Delhi State Legal Services Authority (DSLSA) for on-the-spot settlement of electricity theft and disconnection cases, a spokesperson of the discom said on Wednesday.

Cases that are either pending in any court of law or are yet to be filed in any court will be taken up at the Lok Adalat. Those desirous of settling their electricity theft cases can either attend in person or through their authorised representatives carrying authorisation letter, he said.

The litigants may register prior to the Lok Adalat by calling on 19124 or by writing to eac.care@tatapower-ddl.com, he added. (PTI)

The Delhi University sought information from its colleges on the number of additional teaching and non-teaching staff members required to deal with the "additional pressure" created due to the implementation of the 10 per cent reservation for the EWS category in admissions, a senior varsity official said on Wednesday.

Reservation for EWS for admission to all colleges and universities was implemented in 2019. (PTI)

Five policemen and a home guard were injured after a man stabbed them inside the Cyber Cell police station in Shahdara on Wednesday afternoon.

Police said the incident took place on the third floor of the station, and the accused was eventually arrested.

The Delhi Police busted a fake visa racket and arrested three persons for allegedly cheating people in the name of sending them to European countries, the police said Wednesday. The police said the accused were forging Polish visas with the help of their associate based in Poland.

The gang primarily operated in Punjab and Haryana and was trying to “induce” people to spend a huge amount of money to get a residence visa. Read more

The court was hearing a habeas corpus plea filed on behalf of the woman's husband seeking direction to the authorities to produce his wife and daughter who are in illegal custody of the woman's parents.

The man, in his plea through advocate Anurag Pratap, submitted that he married the woman, who was a widow and was having a girl child, in January this year. (PTI)

Congress president Sonia Gandhi on Wednesday wrote to the Enforcement Directorate seeking postponement of her appearance by a few weeks till she recovers completely from Covid and a lung infection.

The Congress president had been summoned by the agency for questioning in a money laundering case related to the National Herald newspaper on June 23.

"Since she has been strictly advised rest at home following her hospitalisation on account of Covid and lung infection, Congress President Smt. Sonia Gandhi has written to ED today seeking the postponement of her appearance there by a few weeks till she has recovered completely," Congress general secretary Jairam Ramesh said on Twitter. (PTI)

The counting of votes for Haryana’s 18 municipal councils and 28 municipal committees began at 8 am Wednesday. After the Aam Aadmi Party (AAP) opened its account by winning the Ismailabad (Kaithal) municipal committee chairperson post, party president Arvind Kejriwal congratulated the winners.

Sources said Gupta was arrested since recent investigations into the case revealed that he had not only destroyed some evidence but also attempted to bribe officials of Security and Exchange Board of India (SEBI) when it was probing issues associated with NSE. Read more

The Delhi public works department (PWD) has ordered all its finance officers to provide monthly reports on or before the 10th of every month, starting from July, according to officials.

According to officials, this is being done in all departments to keep a check on spending and to see whether the funds released for projects and administrative functionings are being correctly applied and used.

“All finance officers to report to COA (controller of accounts) also and provide consolidated monthly report in respect of their zones of data of transactions that took place up to previous month or during the month under all heads including debt, deposit, suspense and remittance of every division…And furnish it latest by 10th of every month,” the order stated. Read more

The Delhi University has announced it will conduct a second phase of semester examinations for students of undergraduate and postgraduate courses who could not take the paper previously due to the COVID-19 pandemic and other reasons.

In a notification issued on Tuesday, the university said the registration for the examination will begin from June 29.

The previous round of physical mode examination for all undergraduate and postgraduate programmes took place in May and June. This was the first time in two years that the university resumed the physical mode of examination. However, some students could not attend the examination due to various reasons including COVID-19. (PTI)

Congress leader Rahul Gandhi was questioned for nine hours by the Enforcement Directorate for the fifth day of questioning in the National Herald case.

Noida highrise residents ‘beaten up’ after protest over maintenance, 7 arrested

Residents of a Noida highrise were allegedly beaten up by goons on Sunday after they protested against the builder’s alleged poor upkeep and refusal to hand over the maintenance to the resident welfare association (RWA).

The police said that they have arrested seven people in connection with the incident at Sunshine Helios in Sector 78 and registered a case under Indian Penal Code (IPC) sections 147 (rioting) and 323 (causing hurt). The police added that they were probing allegations that the arrested individuals were linked to the builder. Meanwhile, the builder company, Sunshine Infrawell denied the allegations and said that it was the residents who had hired goons.

Under 'Dilli Ki Yogshala', the Delhi government provides a free yoga trainer to groups of 25 people to learn the ancient Indian practice in community spaces and parks. So far, 17,000 citizens have opted for the scheme at 546 parks and public spaces across the national capital, according to the government. 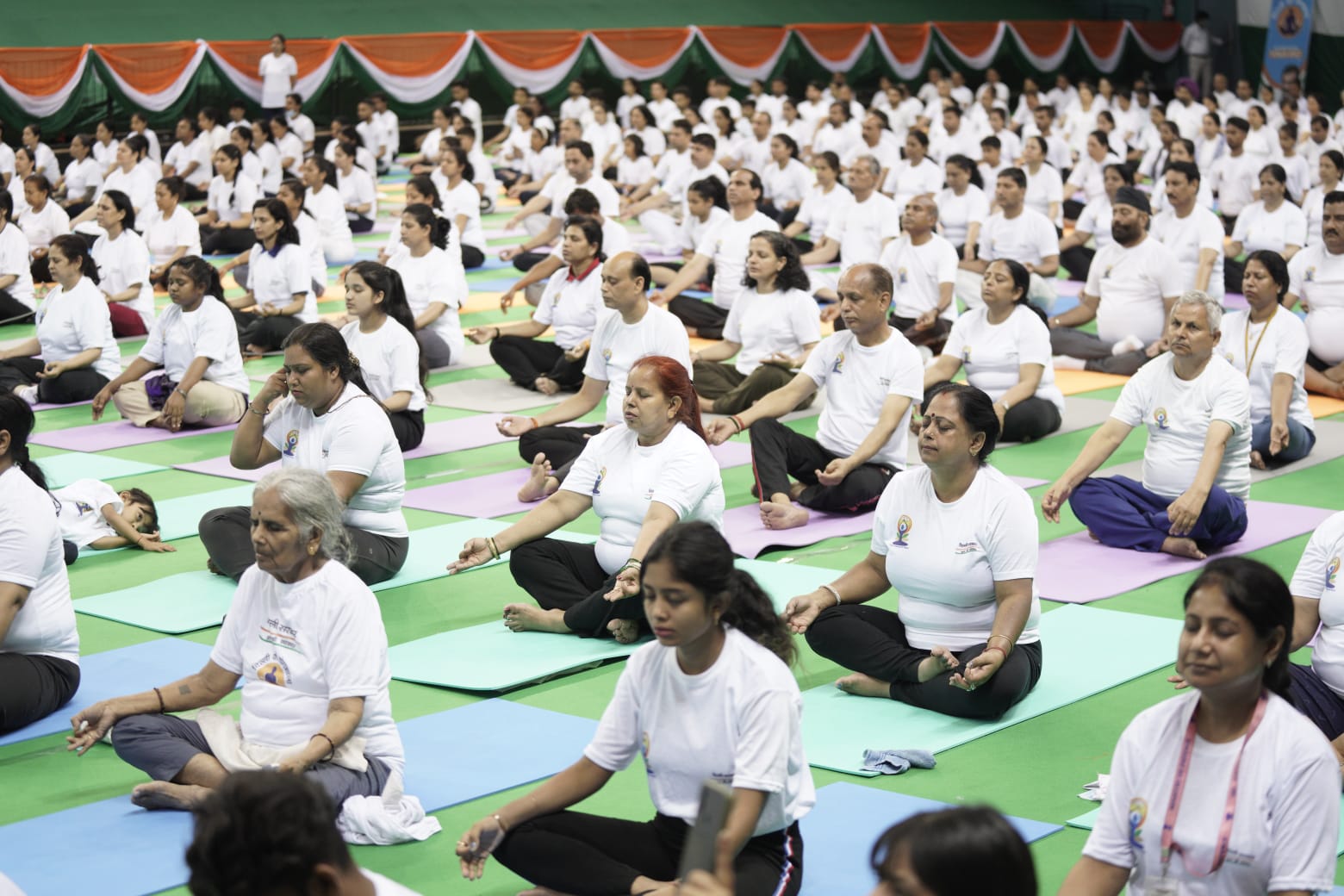 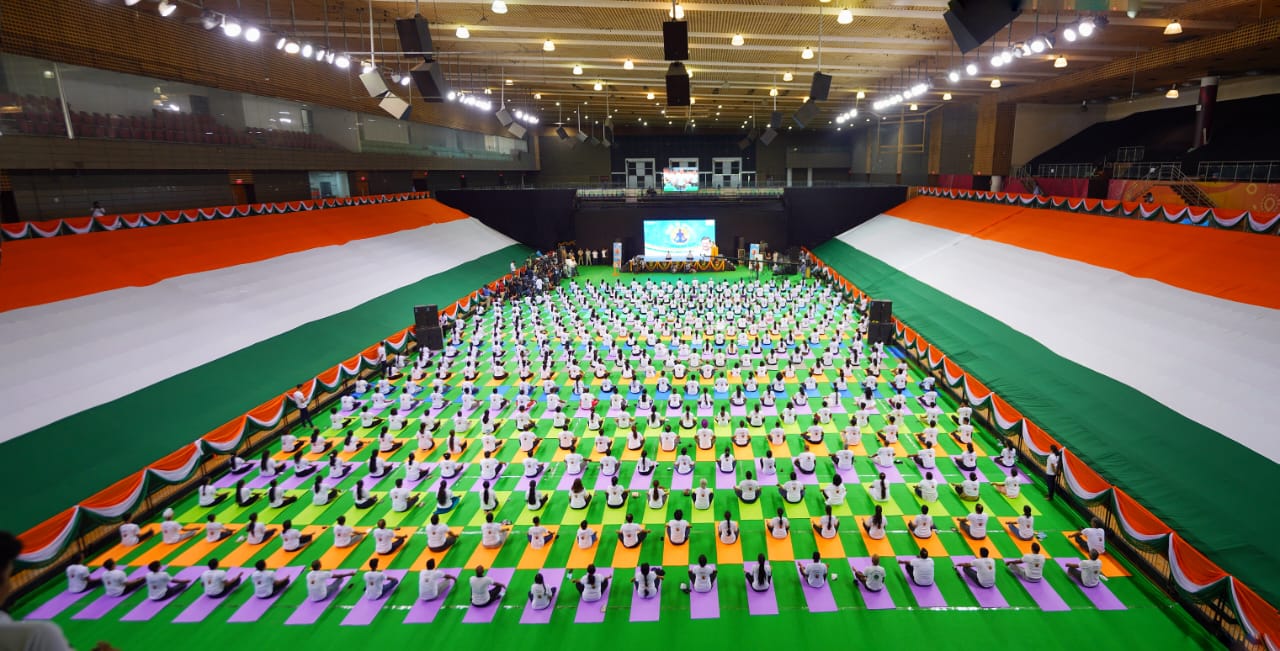 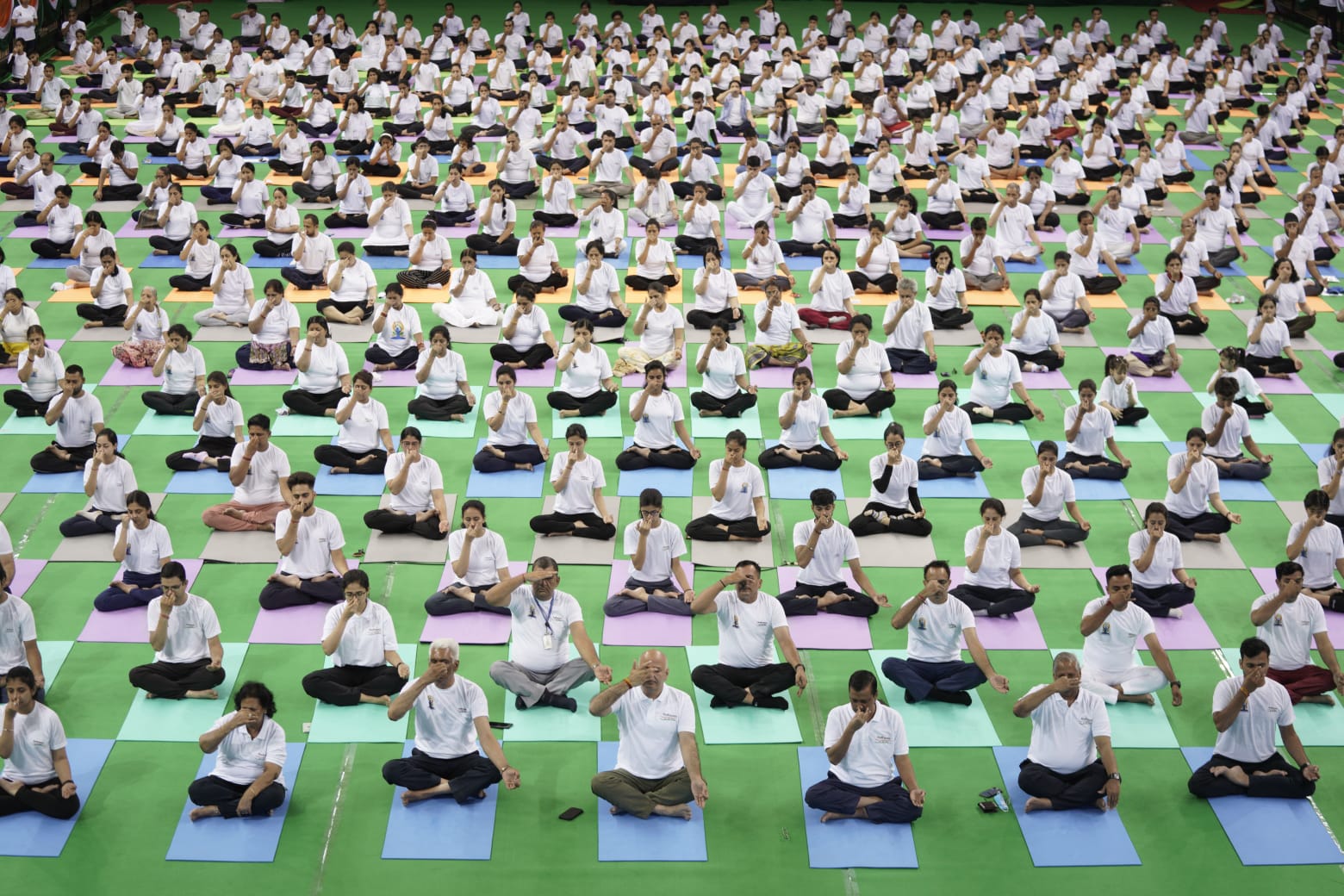 On the occasion of the International Yoga Day, the Delhi Chief Minister Arvind Kejriwal performed yoga asanas with hundreds of people at the Thyagraj Stadium here. He was joined by Deputy Chief Minister Manish Sisodia, who also holds the education portfolio, and members of 'Dilli Ki Yogshala', the initiative under which the city government teaches yoga to citizens for free. 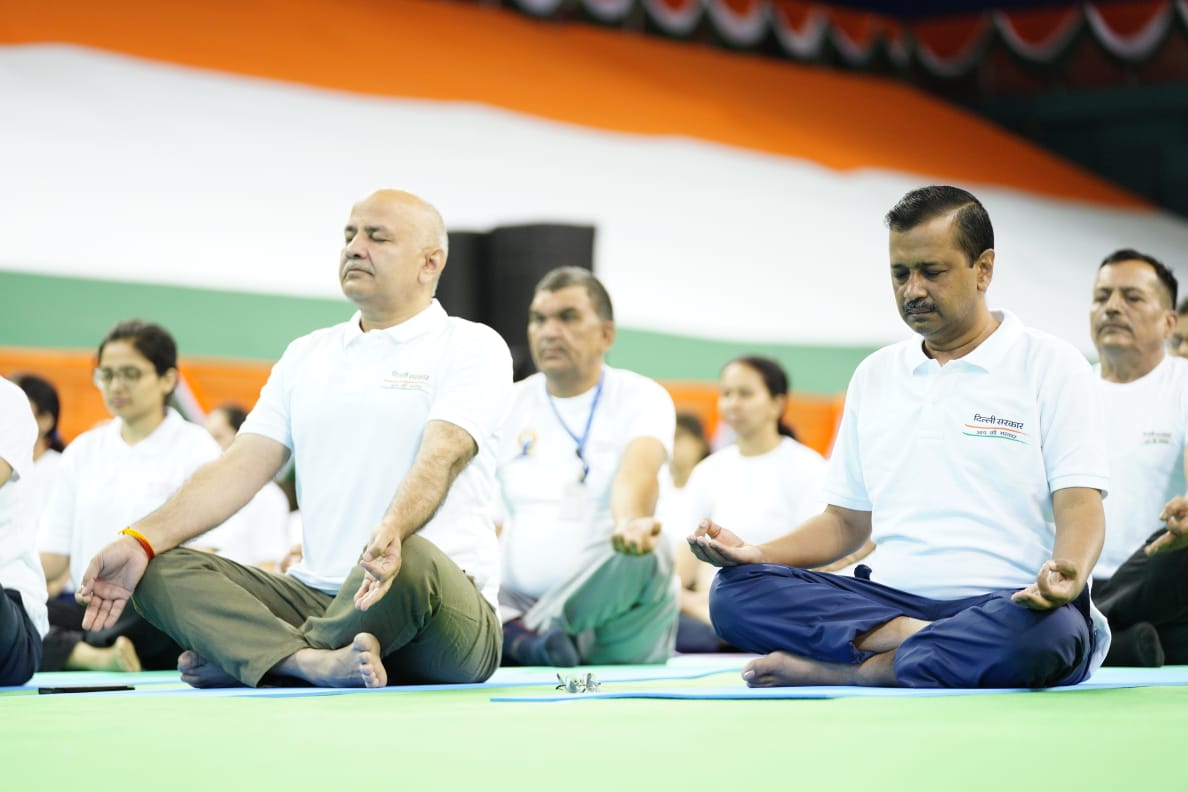 Congress leader Rahul Gandhi on Tuesday was questioned for nine hours by the Enforcement Directorate for the fifth day of questioning in the National Herald case. His questioning will resume again, according to sources. Rahul is being questioned about the ownership of Young Indian (YI) by the Gandhi family and its shareholding in Associate Journals Limited (AJL), the company that runs the National Herald newspaper.

Sixteen Youth Congress workers were arrested Monday for allegedly obstructing a train at Shivaji Bridge railway station during a protest against the Agnipath scheme and the interrogation of Rahul Gandhi by the Enforcement Directorate.