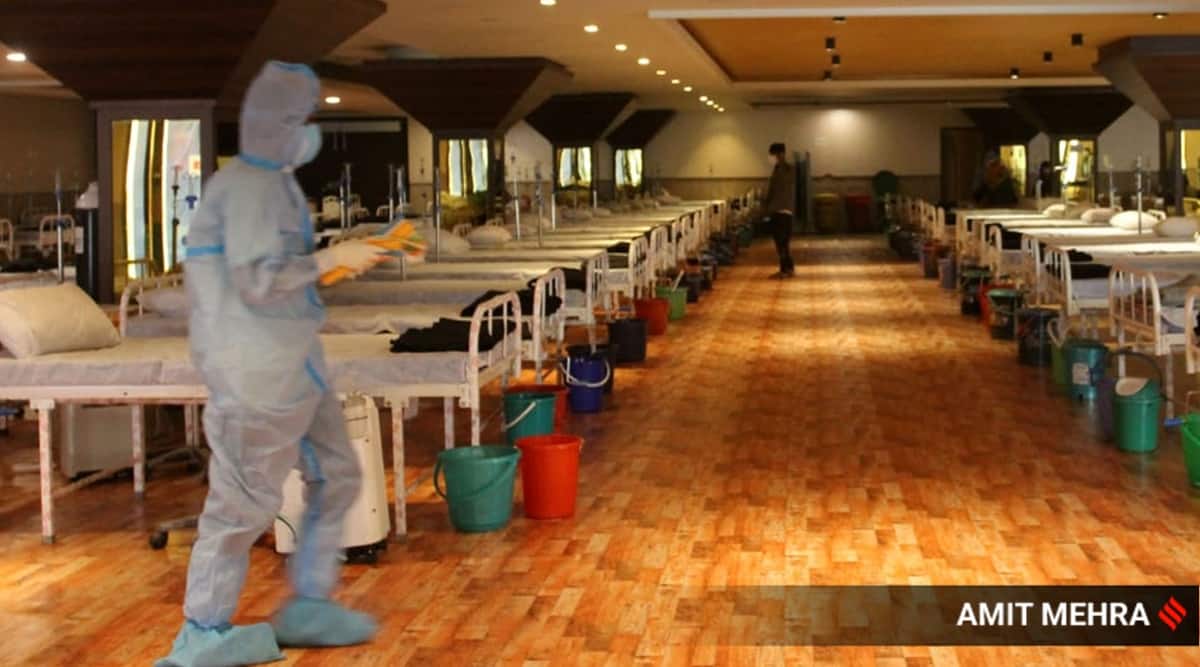 Inside a Covid isolation centre set up at a banquet hall, in New Delhi. (Express Photo by Amit Mehra)

Delhi news highlights: Delhi on Thursday reported record 28,867 fresh Covid cases and 31 deaths. The positivity rate in the city stands at 29.21 per cent. On Wednesday, the city had detected 27,561 cases of coronavirus at a positivity rate of 26.22 per cent.

Earlier today, Delhi Health Minister Satyendar Jain said that the hospital admission rate for Covid-19 has stabilised, which indicates coronavirus cases may go down soon. He also added that the national capital is expected to see around 27,500 COVID-19 cases today. “We have got deaths audited & they are mostly among those with comorbidities,” he said.

In other news, the city was enveloped in dense fog on Thursday morning, while the minimum temperature dipped to 5.8 degrees Celsius. Dense fog was observed at Palam from 4.30 am onwards, with visibility at 50 to 100 metres, according to the India Meteorological Department. At Safdarjung, dense fog with a visibility of around 100 metres was observed from 7 am onwards. The air quality is likely to remain in the ‘poor’ category, according to the Air Quality Early Warning System for Delhi. It is likely to deteriorate to ‘very poor’ over the next two days, according to the forecast.

Delhi reported 28,867 fresh cases of Covid-19 on Thursday, pushing past the peak of 28,395 cases reported on April 20, 2021, during the Delta variant-driven wave. The surge is the worst that the national capital has seen. With a high number of infections being reported despite fewer tests, the positivity rate–the proportion of samples that return positive–shot up to 29.2 per cent.

The capital also reported 31 deaths, fewer than the toll of 40 from the previous day. There have been 164 Covid-19 deaths in Delhi in January. There were only nine deaths reported in December, seven in November, four in October, and five in September. More details here. 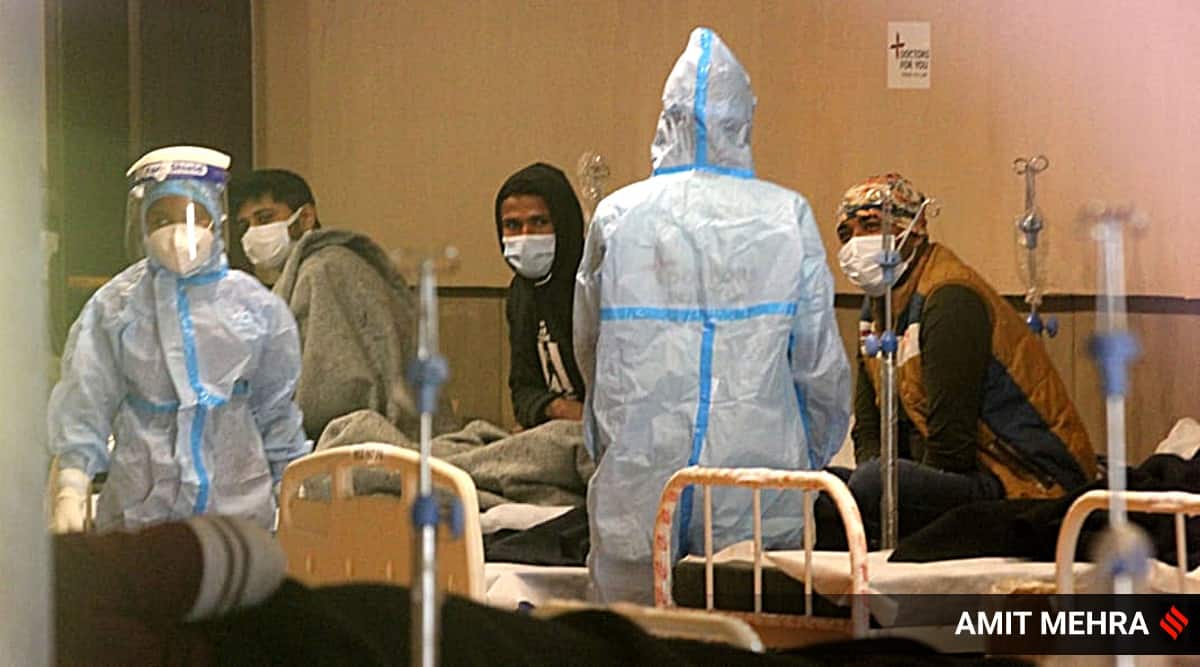 Delhi on Thursday reported record 28,867 fresh Covid cases and 31 deaths. The positivity rate in the city stands at 29.21 per cent. On Wednesday, the city had detected 27,561 cases of coronavirus at a positivity rate of 26.22 per cent. The Delhi High Court Thursday pulled up the Delhi Government for “inaction and lethargy” in making operational a COVID care centre at Jawaharlal Nehru University (JNU) campus even though space has been earmarked for it.

“Despite repeated orders passed by this court, it appears that the direction for setting up a COVID centre in JNU campus have not been followed in true letter and spirit. While the respondent no. 1 (JNU) had already earmarked a space inside the Sabarmati dormitory for setting up the centre, it is the inaction on the part of Delhi government which has led to the centre not being operational till date,” the court said. (PTI)

We are deeply aggrieved by the death of our delivery partner Salil Tripathi in an unfortunate road incident. We are extending all possible support to help the family get through this – pic.twitter.com/yJOUDsPpet

Maharashtra's former Home Minister Anil Vasantrao Deshmukh on Thursday withdrew from Delhi High Court the petition challenging a trial court order by which the CBI was directed to investigate the NCP leader in connection with the leak of sensitive and confidential information related to a corruption case.

"What is wrong in the order,"  asked Justice Subramonium Prasad.

Deshmukh's counsel argued that the trial court order gives an impression that it is a mandate to the investigation agency to implicate him.

However, the court didn't agree with submission and said that the trial court judge in the impugned order has only given reasons for further investigation.

"It's needles to state that a specialised agency like CBI does not get carried away by the observations made by the magistrate at the time of ordering further investigation. It's obvious and need not to be stated that CBI would act independently," observed Justice Prasad.

Following the courts observations, Deshmukh's counsel submitted that he is not pressing the petition at this stage.

In the past four days, a total of 97 Covid deaths have been recorded in the city, including 40 on Wednesday alone.

According to sources, the Delhi government’s health department has formed a team to look into vaccinations status, comorbid conditions, and status of these patients at the time of admission. Read more

A Delhi court has handed life imprisonment to a man who was convicted of burning an autorickshaw driver alive inside his house over a monetary dispute in the Nand Nagri area in 2015.

Additional Sessions Judge Ravinder Bedi also imposed a fine of Rs 7,000 on the convict Rohit Kumar and awarded a compensation of Rs 10 lakh to the family of the deceased.

As per court records, the deceased, Vijay Arora (50), an autorickshaw driver, had lent Rs 70,000 to the convict and had been asking him to return the loan. On August 3, 2015, the accused visited Arora late in the night at his home in the Nand Nagari area. Read more

Delhi reported 40 deaths due to Covid on Wednesday, pushing January’s toll past 100. The cases shot up to 27,561 on Wednesday, inching close to a peak of 28,395 cases during the delta variant-driven wave of infections in April-May last year.

This comes after a slight plateauing in cases seen over the last two days when there were fewer tests conducted. Read more

Of the 4,626 beds readied at Covid care centres in the city, 12.75% are occupied. A total of 590 patients are admitted at these makeshift care facilities, up from 324 a week ago, on January 4. Eight such centres have been readied so far.

At the Commonwealth Games Village Covid care centre in East Delhi, for instance, 84 patients were admitted as of Tuesday. Most people admitted there are mildly symptomatic, with  fever and severe body ache. “In this wave we are not seeing much oxygen needs except 2-3 patients that have associated comorbidities,” said Dr Prakerti Kashyap, who is part of Doctors For You, the NGO running the centre. Read more

Delhi Health Minister Satyendar Jain Thursday said that hospital admission rate for Covid-19 has stabilised, which indicates coronavirus cases may go down soon. He also added that the national capital is expected to see around 27,500 COVID-19 cases today. "We have got deaths audited & they are mostly among those with comorbidities," he added.  ---PTI

Hospitalisations with Covid have either stagnated, or in some cases started going down, even as Delhi continues to report over 20,000 cases of the infection each day, according to doctors. As per the government’s daily health bulletin, the number of hospitalisations has increased from under a 1,000 to 2,363 in seven days, yet the hospitals have started seeing a changing trend.

At Delhi government’s largest hospital, Lok Nayak, new admissions dropped to 20 in the last 24 hours as compared to 35 to 40 patients they were seeing each day earlier. Read more

Delhi was enveloped in dense fog on Thursday morning, while the minimum temperature dipped to 5.8 degrees Celsius.

Delhi on Thursday reported three more cases of the Omicron variant, taking the total number of cases of the new variant in the city to 549. For the past few days, Delhi had been witnessing zero Omicron cases.

Delhi on Wednesday reported 40 Covid-19 deaths, pushing January’s death toll to 100. At least 27,561 fresh cases were detected in the past 24 hours, the second-highest daily number since the pandemic began. The positivity rate was recorded at 26.22 percent. 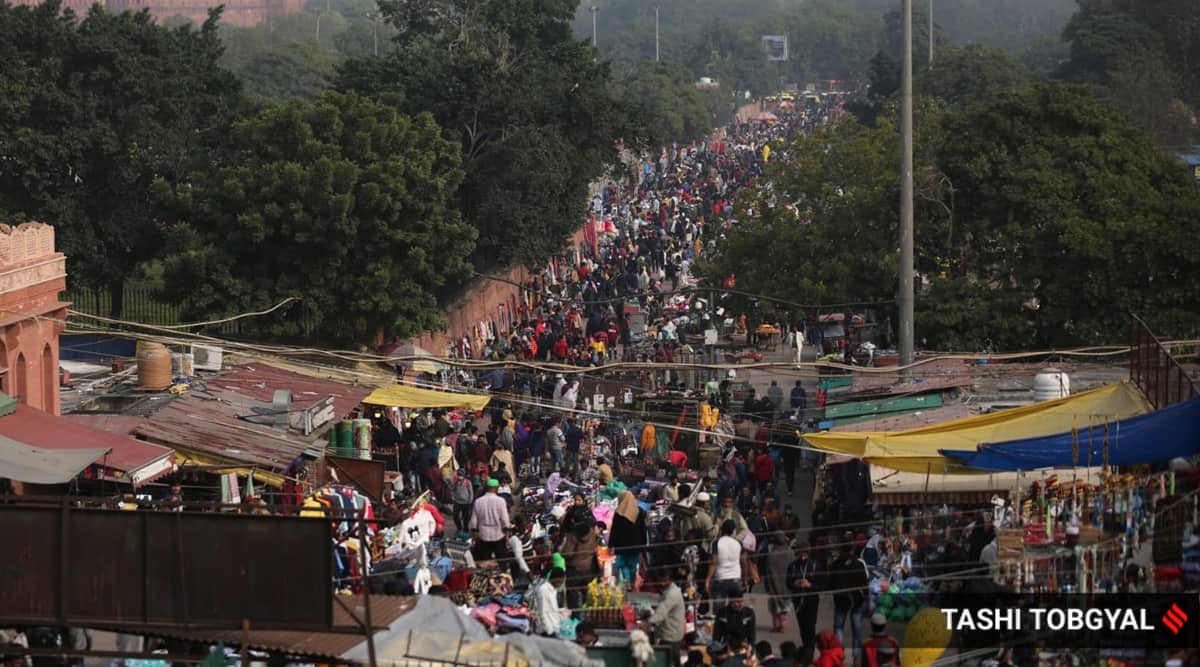 A complaint had been filed by Nisar Ahmad, who alleged that his house was vandalised and ransacked during the riots in 2020.

The Delhi Police in their chargesheet filed in a Northeast Delhi riots case have found no evidence against a Bharatiya Janata Party councillor, who was accused of giving hate speeches.

A complaint had been filed by Nisar Ahmad, who alleged that his house was vandalised and ransacked during the riots in 2020.

He also submitted, through his lawyer M R Shamshad, that on February 24, 2020, some locals with microphone and speakers had called for violence against Muslims to a crowd of 500-600 people at Bhagirathi Vihar.

Two air pistols worth more than Rs 3.2 lakh were stolen from two national-level shooters by unidentified men, allegedly from the ‘thak thak’ gang, in Gurgaon on Monday. The accused are yet to be identified.

Police said the incident took place around 12.15 pm when the complainant, Vinay Rathee, 20, and his friend, Sagar, 18, went to Sadar Bazar market to purchase a phone cover.

Rathee told The Indian Express that after their practice session, they headed to Sadar Bazar, where his friend parked his car and went to a shop, while Rathee waited in the car.