Delhi News Highlights: The Delhi Police has beefed up security outside Congress chief Sonia Gandhi's house in Janpath. Police personnel have also been deployed outside AICC headquarters at Akbar Road. The streets have also been barricaded.

Delhi News Highlights: The Congress on Wednesday condemned the manner in which probe agencies have been given a free hand in conducting raids. Claiming that the recent ED raids on Congress leaders and the National Herald office were meant to cause “humiliation, insult and intimidation,” party leader Abhishek Singhvi asserted that the party will not be silenced by “such threats of the BJP government”. The Congress is set to observe a massive nationwide protest on August 5 on price rise and unemployment. In Delhi, party MPs will hold “Chalo Rashtrapati Bhavan” from Parliament to register their protest over the issues. CWC members and senior leadership will participate in “PM House gherao” that day.

The Delhi Police has beefed up security outside Congress chief Sonia Gandhi’s house in Janpath. Senior police officers have refused to comment on the matter. Police personnel have also been deployed outside AICC headquarters at Akbar Road. The streets have also been barricaded. According to a source, AICC workers and public persons are likely to stage a protest outside AICC HQ and other areas. Since Section 144 is imposed in the area and barricades have been put up to avoid any untoward situation, the source said.

The Enforcement Directorate has sealed the office of Young Indian situated in the premises of National Herald office, instructing that the premises not be opened without prior permission from the agency, ANI reported. The ED had on Tuesday conducted search operations at Herald House in Delhi, among 12 locations, in connection with its money laundering probe in the National Herald case. Herald House is the registered office address of Associate Journals Limited (AJL), the National Herald newspaper’s publisher, which is under probe over its acquisition by Young Indian, a firm linked to the Gandhi family.

The capital reported 2,073 fresh cases of Covid-19 Wednesday, with the incidence crossing the 2,000-mark for the first time in 71 days since February 4 when there were 2,272 cases recorded as the omicron variant-driven wave was receding in the capital. The positivity rate — the proportion of samples tested that return positive — stood at 11.64% on Wednesday, according to the daily health bulletin released by the Delhi government.

The average positivity rate over the last three days is 11.23%, which is also the highest since the third wave waned in the city.

Five deaths in Covid patients were also recorded on Wednesday, taking this month’s toll to 10 in three days. There were 50 deaths recorded in July, 50 in June, and 35 in May. This is the highest single-day toll reported in the city since July 3 when five deaths were reported. “Most of the deaths reported are in elderly people and those suffering from comorbid conditions,” said Dr Suranjit Chatterjee, senior consultant of internal medicine at Indraprastha Apollo hospital. Read More

Former Mumbai Police commissioner Sanjay Pandey, in judicial custody for his alleged role in tapping of phones of NSE employees, told a Delhi court on Wednesday that he is a whistleblower who had, in fact, pointed out criminal activities such as “betting in IPL” that were purportedly taking place in the stock exchange.

Pandey's lawyers made the submissions before Special Judge Sunena Sharma, who will pronounce the order on his bail plea on Thursday.

Delhi reported its fourth case of monkeypox on Wednesday with a 31-year-old Nigerian woman testing positive for the disease, official sources said. With this case, India's tally of monkeypox infections has gone up to nine. She is the first woman in India to test positive for monkeypox.

The woman has fever and skin lesions and is admitted to Lok Nayak Jai Prakash (LNJP) Hospital, sources said, adding her samples were sent for testing and the results came positive on Wednesday. There is no information about her travelling abroad recently, sources said. (PTI)

Party 'under siege', govt treating our leaders like 'terrorists': Congress

The Congress on Wednesday alleged the party was "under siege" by the government which, it said, surrounded its headquarters and the residences of party chief Sonia Gandhi and Rahul Gandhi as if they were "terrorists".

Addressing a hurriedly-convened press conference at the party office in the evening after roads leading to its headquarters were barricaded and police deployed nearby, Congress leaders Jairam Ramesh, Ajay Maken and Abhishek Singhvi said it will not be intimidated by this kind of "cheap and petty politics" and will continue to raise people's issues.

This came soon after the ED temporarily sealed the premises of Young Indian (YI) in the Congress-owned National Herald office in Delhi. (PTI)

Our voices will not be silenced by these cheap tactics: Singhvi attacks BJP

Congress leader A M Singhvi, targeting the BJP government, said, ' You are treating this institution, this party and these leaders as terrorists. It is the worst form of petty politics to divert and then on the contrary you blame us.' He added: 'Our voices will not be silenced by these cheap tactics.'

He further said the party believes that these are the actions of a frustrated political regime.

Those who threaten, practice politics of vengeance and spread atmosphere of fear are the ones scared: Jairam Ramesh attacks BJP

Stating that the Congress is not scared, party leader Jairam Ramesh said those who threaten, practice politics of vengeance and spread the atmosphere of fear, are the ones afraid.

We will go ahead with August 5 protest even if jailed: Cong's Ajay Maken

Addressing media, Congress leader Ajay Maken said the party has received a letter from the DCP denying permission for the Aug 5 protest and added that the AICC HQ was turned into a Police cantonment. "Govt may suppress us as much as they want but we will protest against inflation, unemployment, and GST on edible items and go ahead with our schedule even if jailed," he said.

HC directs structural audit of Prince Aly Khan Hospital by experts to asc...
Chhagan Bhujbal writes to Shinde, Fandavis, says Tekchandani ‘troub...
Ahmedabad: Metro service on North-South corridor to begin on October 6
HC to hear next month PIL against Sarnaik for usurping plot reserved for ...
Maharashtra: Shambhuraj Desai did not literally mean to say people would ...
More from Cities >>
Jairam Ramesh on ED action: Those who threaten are the ones who are scared

The Congress on Wednesday condemned the ways in which probe agencies have been given a free hand in conducting raids. Terming the recent ED raids on the National Herald office as one to cause humiliation, insult and intimidation, party leader Abhishek Singhvi asserted that the party will not be silenced by the "such threats of the BJP government".

On the sealing of the Young Indian office by the ED, Congress leader Salman Khurshid told reporters on Wednesday that the party spokesperson will speak on the issue officially. Stating that there is no reason for the sealing of the office, Khurshid said, "Nobody can hide and attack in this country."

Regarding the money laundering case Khurshid said: "We have clearly said that the matter holds no ground because there is no money. If no money is involved, how can there be laundering?" (ANI)

As Delhi police beefed up security outside AICC headquarters at Akbar Road, Congress leaders Mallikarjun Kharge, Salman Khurshid, Digvijaya Singh, P Chidambaram and others have arrived at the AICC HQ.

Four workers died and two were injured after allegedly inhaling toxic fumes while cleaning sludge from a five-feet wastage tank in a factory in Bahadurgarh in Jhajjar.

Traffic movement on Noida Expressway to be halted for 30 minutes during demolition of Supertech twin towers: Police

The road opposite the demolition site at Supertech Twin Towers in Noida Sector 93A will be shut down within the next two days, Noida Police said Wednesday. The twin towers — Apex and Ceyance — are scheduled to be demolished on August 21 with a cushion period of one week till August 28, as per the directions of the Supreme Court on May 17.

He added, "This precaution has been taken to avoid any untoward accident in the area and to avoid any crowd which may gather on the demolition day." Read More

Twenty-eight Afghan Sikhs arrived in Delhi Wednesday afternoon days after a terror attack inside a Gurdwara in Afghanistan. The evacuation is being facilitated by the Shiromani Gurdwara Parbandhak Committee (SGPC). 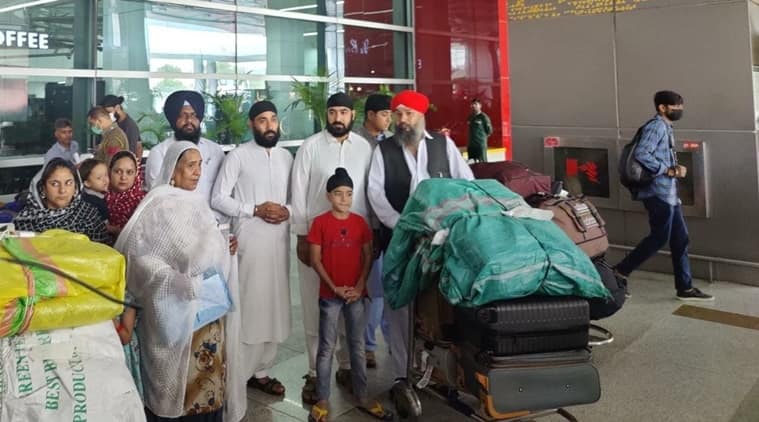 Among the biggest fallouts of the Delhi government’s excise policy, which was adopted in November last year, has been the crippling of smaller players who had secured licences at prices ranging from Rs 225 crore to Rs 250 crore.

Most of these players have now refused to renew their licence while sustaining significant losses. The Delhi government’s Cabinet note, which was passed Sunday and sent to the L-G for approval, also talks about the impact its flagship policy has had on the sector.

By Tuesday, vendors from 15 out of 32 zones that Delhi has been divided into had surrendered their licences, finding it too hard to compete on the terms set by the government. As per the policy, vendors had to pay Rs 1 crore per day as excise duty, irrespective of the stock they bought. Read More

☔ Rain in parts of National Capital

Several parts of the National Capital witnessed heavy showers on Wednesday afternoon. Thunderstorm with moderate to heavy intensity rain is likely to occur over and adjoining areas of isolated places of Delhi, Noida, Faridabad, and Indirapuram, according to the India Meteorological Department's latest update.

Watch | ‘Tiranga bike rally’ for MPs of all parties

The Culture Ministry will organise a ‘Tiranga bike rally’ from the Red Fort to Parliament for the MPs of all parties on Wednesday, Parliamentary Affairs Minister Prahlad Joshi said, while appealing to all MPs to attend the event that will begin at 8.30am.

Briefing reporters after the BJP Parliamentary Party meeting on Tuesday, Joshi said it’s a Culture Ministry programme and not that of the party. Earlier, at the meeting, BJP president J P Nadda outlined a host of exercises for the party members during the week-long programme to celebrate 75th anniversary of India’s Independence starting from August 9.

#WATCH | Delhi: Tiranga Bike Rally for MPs being taken out from Red Fort. The rally will end at Vijay Chowk near the Parliament pic.twitter.com/g1yzPMe1WU

‘Tiranga bike rally’ for MPs kicks off from Red Fort

The Culture Ministry’s ‘Tiranga bike rally’ from the Red Fort to Parliament kicked off on Wednesday morning, with MPs from across parties participating. The rally was flagged off by Rajya Sabha Chairman Venkaiah Naidu, along with Union ministers Pralhad Joshi and Piyush Goyal.

Smoke billows out after fire break out at Bhalswa landfill a day before World Environment Day in New Delhi on June 4, 2022. (Express Photo)

There have been 76 fire calls from the three landfill sites in Delhi in four years, according to data submitted by the Delhi Fire Services to a joint committee constituted by the National Green Tribunal (NGT) earlier this year to suggest further course of action for the Ghazipur landfill.

The Bhalswa and Ghazipur landfills have seen three fire calls each till April 30 this year, while there were two such calls from the landfill at Tughlaqabad. There were 12 such fire calls from Bhalswa and four from Ghazipur last year. These fires are mostly seen in the summer and tend to last for days.