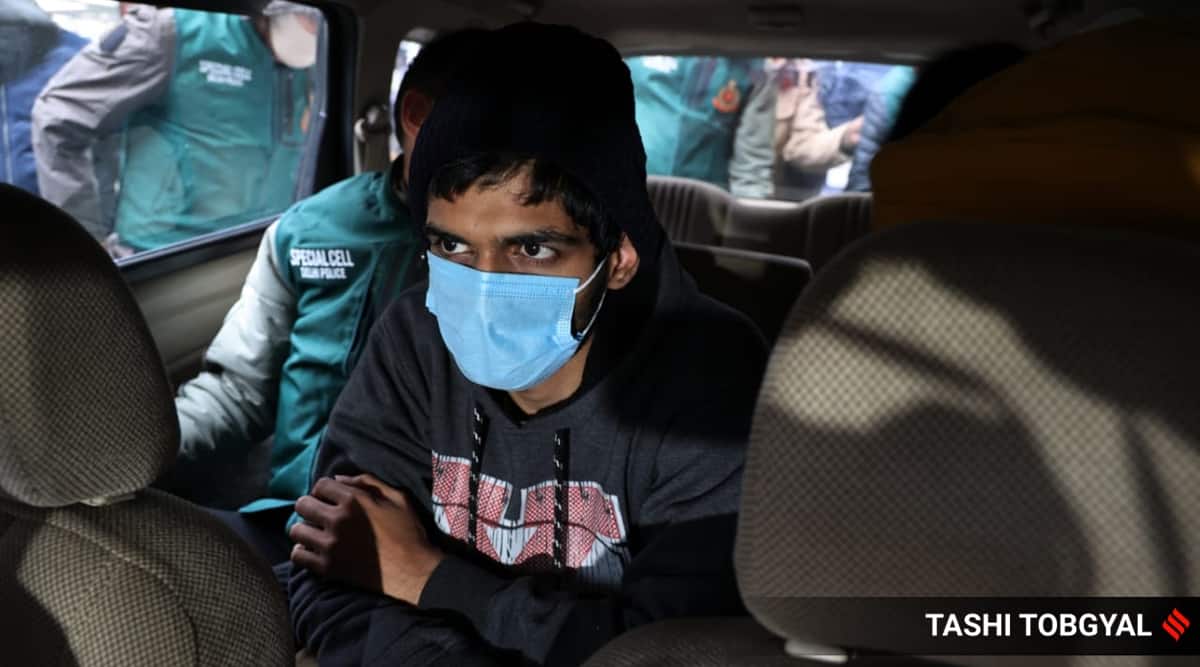 The student has been identified as Niraj Bishnoi, a resident of Jorhat.

Identifying the accused as Niraj Bishnoi, a resident of Jorhat district, police said he is a second-year B.Tech. student at Vellore Institute of Technology, Bhopal. Bishnoi is alleged to be the “main conspirator and creator” of the app.

Later in the day, VIT (Bhopal) issued a notice saying that Bishnoi had been suspended.

This is the fourth arrest in the case. Earlier this week, Mumbai Police arrested Vishal Kumar Jha, a 21-year-old engineering student, from Bengaluru, and two others — Mayank Rawat, a 21-year-old Delhi University student, and Shweta Singh, 19 — from Uttarakhand.

The app was hosted on US-based GitHub on December 31. Doctored photos of at least 100 Muslim women, along with lewd remarks and comments, were posted online. On January 2, separate FIRs were registered in Delhi and Mumbai, based on complaints by women who were among those targeted.

Bishnoi was picked up from his residence in Jorhat by a Delhi Police team led by DCP (Cyber Cell) K P S Malhotra. He was brought to Delhi, where he was formally arrested. He has been sent to police custody for seven days.

“We have arrested the main conspirator/ mastermind and creator of the web-based app. He was also running the main Twitter account of the app. Our team caught him in Jorhat. He has confessed to his crime,” said Malhotra. He said Bishnoi was tracked following technical surveillance on the devices used to upload and share the objectionable content. He said “forensic remnants” of the app were recovered from Bishnoi’s device. Bishnoi also admitted that he created the app, said police.

“We have found that the other three persons (arrested by Mumbai Police) were just following Bishnoi’s instructions. They were following him on social media. He was guiding them to create accounts on Twitter,” said a source.

“We don’t think he’s involved in other cases. We are questioning him about the app and how he created it. The others accused didn’t reveal his name during questioning. We tracked him down,” said a police source. Sources said they tracked Bishnoi’s IP address during their investigations.

According to police, Bishnoi confessed that he had created the app on GitHub, and was also behind two Twitter handles @bullibai_ and @Sage0x1. “He developed the app in November and updated it again in December last year. The Twitter account was created on December 31. Another Twitter account, @Sage0x1, was used by him to tweet about the app. He was continuously monitoring the news on social media,” said Malhotra.

Police sources said Bishnoi was also the person behind the Twitter handle @giyu44, which, on Wednesday, had tweeted that the Mumbai Police had arrested “innocents”. “I am the person who created #BulliBaiApp,” he had tweeted. In a series of tweets, he had asked the Mumbai Police to “publicly apologise for arresting two innocents and defaming them”. “I will personally surrender if someone arranges for my travel by flight,” said a tweet.

On Thursday, around 6.55 pm, another tweet with a screenshot of an email was posted from the account. It said the screenshot was of a purported mail from help@github.com asking the receiver to “respond” to a government request regarding the GitHub account.

According to Delhi Police sources, Bishnoi said he was upset with some people for allegedly posting obscene, morphed pictures of Hindu women, and decided to teach them a lesson. “He first created an account, posted pictures and then asked his friends, including the three accused arrested by the Mumbai Police, to share the content on social media. He started talking with them on social media about a year ago,” said sources. Police said Bishnoi also changed his statement, giving different reasons for uploading the content.

In Assam, Superintendent of Police, Jorhat, Ankur Jain, said: “The Delhi Police contacted us about Bishnoi. They said he had created the app and morphed photos of Muslim women. We helped them and he was apprehended… Bishnoi was in Rajasthan for some time and then went to Delhi. On December 25, he came back to Assam. His laptop and phone have been seized.”

Speaking to The Indian Express from their home in Jorhat, Bishnoi’s father, who owns a grocery store, said the family was completely in the dark about what was happening. “We have no idea how this happened and are in shock. We were asleep when the police landed at around 11 pm on Wednesday,” he said, adding that he was “not aware of the website” and there had to be “some mistake” in his son’s arrest. He said Bishnoi was “good in studies, especially Computer Science” and had no “negative records” during his school years.

Bishnoi’s father hails from Rajasthan, but moved to Assam in 1986.

The Delhi Police Cyber Cell had earlier written to GitHub and Twitter, seeking details on the app creators and the Twitter handles which shared its content. Twitter asked the police to approach it via “proper channels”. Sources said a formal request was also sent.

In Delhi, a case has been registered under IPC Sections 153A (promoting enmity between different groups on the ground of religion and doing acts prejudicial to maintenance of harmony), 153B (imputations, assertions prejudicial to national integration), 354A (sexual harassment) and 509 (word, gesture or act intended to insult the modesty of a woman) against unknown persons who developed the app and some Twitter handles that disseminated its content.