The elephant has been renamed Jasmine, “to help it shake off its ugly past." 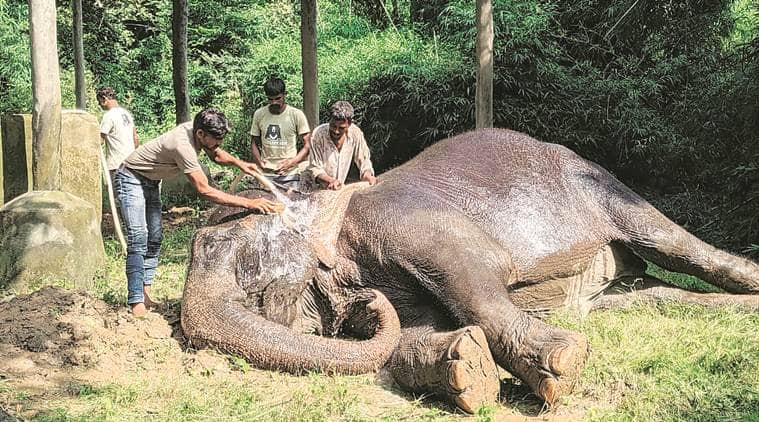 Delhi’s last elephant Laxmi seemed to approve of its new home as it trumpeted upon arrival at the Ban Santour elephant rehabilitation centre in Haryana Thursday morning, officials said.

After reaching the centre around 6 am, Laxmi was fed, given a “proper bath” and examined by a team of veterinarians.

The centre it is housed in is located in a 400-acre forested land in Haryana’s Yamunanagar, and is run by Wildlife SOS in collaboration with the state forest department. “This is a world different from what it’s used to… It’s displaying all issues typical of elephants that are used for begging,” said Kartick Satyanarayan, co-founder of Widlife SOS.

The elephant has been renamed Jasmine, “to help it shake off its ugly past,” he added.

NGO officials said Laxmi appeared weak and added that it would be kept in observation for about a week. Its foot pad is damaged, with cracks in its toenails, from walking on tarmac. Its liver also does not appear healthy.

“We will give the animal complete comfort care and provide all the vitamins and nutrition it needs,” Satyanarayan said. The 35-year-old elephant, Laxmi, was reported missing on July 6 from the banks of the Yamuna near ITO, after its mahout fled with it. (Express Photo: Praveen Khanna)

The centre has four other female elephants who Laxmi would meet in about a week’s time if its health reports are found normal. Andra, one of the elephant’s caretakers from Delhi, also accompanied it to Haryana, Satyanarayan said.

Laxmi was rescued by Delhi Police around midnight Tuesday from Yamuna Khadar near Akshardham, more than two months after its mahout Saddam fled with it. Saddam was arrested.

An officer from Shakarpur police station said, “Saddam shared a location with us in Loni, UP, where he claimed the owner would be hiding out. Our officers went there today but he was not found.”

Wage growth in FY18 falls for fifth year in a row