Arun Yadav, member, Sanyukt Ahir Regiment Morcha, said the demand for a separate Ahir regiment had been a long-standing demand of the community. 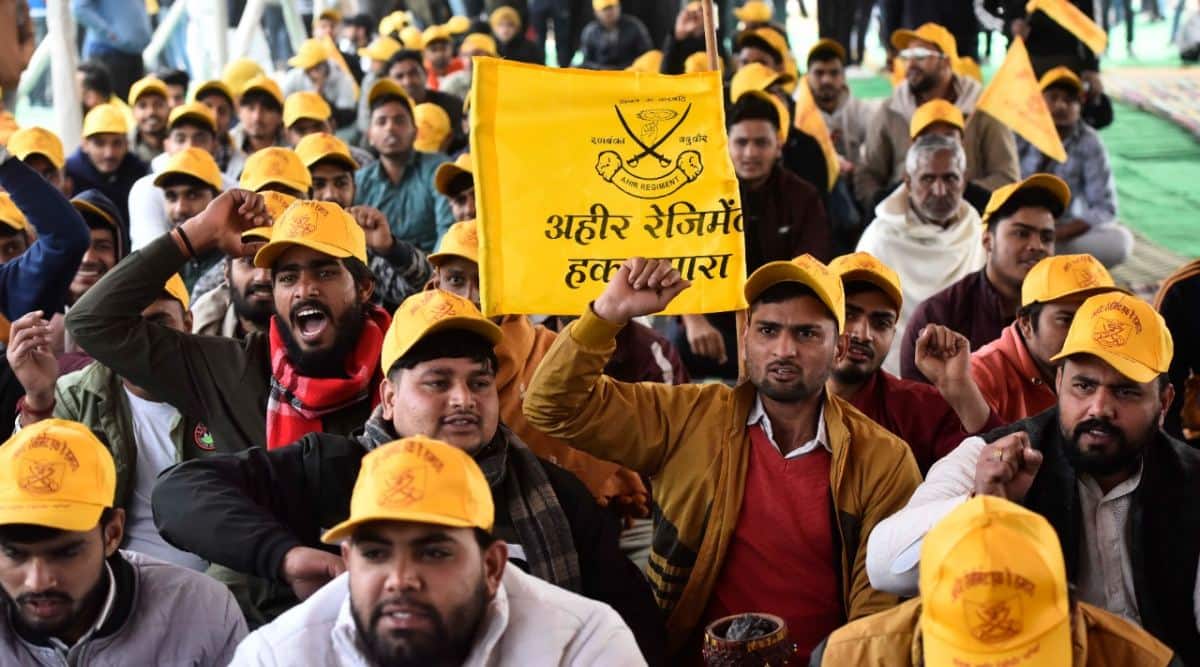 At the protest near the Kherki Daula toll on the Delhi-Gurgaon expressway.

At least 400 people, including a majority from the Ahir community, sat in an indefinite protest near the Kherki Daula toll on the Delhi-Gurgaon expressway on Friday demanding the formation of an Ahir regiment in the Indian Army.

Leading the protesters, members of Sanyukt Ahir Regiment Morcha gathered around 11 am and later camped at a big tent on the under-construction Dwarka Expressway, culminating in traffic congestion for more than 40 minutes. Traffic was affected on service lanes as well before the traffic police officials diverted vehicular movement.

Arun Yadav, member, Sanyukt Ahir Regiment Morcha, said the demand for a separate Ahir regiment had been a long-standing demand of the community. “For more than 70 years, the community has sacrificed for the country in ways more than one. Ahirs have a large representation in the Army. Just like there is a separate caste-based regiment for Sikhs, Gorkhas, Jaat, Garhwal, Rajput, we demand the formation of an Ahir regiment,” said Yadav.

A traffic police officer, requesting anonymity, said, “As some protesters arrived in vehicles and parked it on the side of the expressway, it led to congestion causing slow movement of traffic for over 90 minutes.”

At a ‘Shaheedi Diwas Samaroh’ in village Patauda in Jhajjar, which was held in September 2021 to mark the martyrdom on Ahirwal Kind Rao Tula Ram, Gurgaon MP Rao Inderjit Singh had said he would “raise his voice for a separate Ahir regiment”.

Yadav said that in 2018, the community had protested for ten days and went on a hunger strike. “We had suspended the strike after local politicians had assured us that our demands would be accepted. We have now started an indefinite protest and our agitation will intensity in the coming days. More villages are expected to join us,” he added.

The protesters said they had not blocked traffic on the expressway and it was mainly due to a large crowd suddenly gathering for the protest.

Manoj Yadav, the founder member of Sanyukt Ahir Regiment Morcha, said the demand for Ahir or Yadav regiment was a fight for their honour and rights.

“Throughout history, most martyrs in the army have been from the community. It is unfortunate that Ahirs have not got the recognition like other communities. The recruitment to President’s Bodyguard (PBG) is open only for Rajputs, Jats and Sikh regiments. Either other caste-based regiments should be disbanded or a separate regiment for Yadavs should be formed,” he said.

He added that after consultation with several villages in South Haryana, they registered their morcha as a trust in March 2021 and decided to start an indefinite agitation from Friday. “A core committee of 150 members was formed to discuss our demands. We have support from 36 communities and today people from Gujarat, UP, Bihar, Haryana at the protest site. In the past, we have made several representations to union ministers and MPs, but despite assurances, our demands have not been accepted,” said Manoj Yadav.