Ahead of MCD polls, CM Arvind Kejriwal visits Ghazipur landfill, says day is not far when BJP will be reduced to zero in Delhi 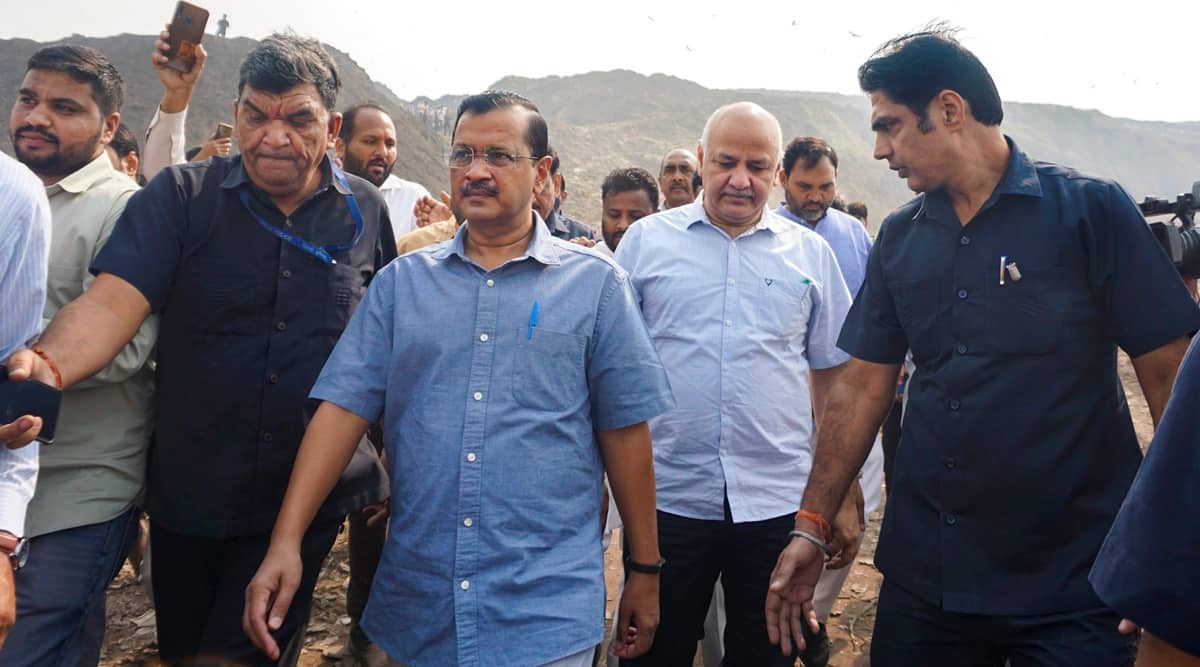 With MCD polls likely in December, AAP has made sanitation a key poll plank and is targeting the BJP’s inability to clean the capital despite being in power for 15 years.

After BJP workers interrupted his route to the landfill, Kejriwal took 10 minutes to address the crowd. “I just visited the garbage mountain (at Ghazipur). It’s embarrassing — Delhi is the national capital, people from across the world visit the city. And what do they see? A garbage mountain,” he said, adding, “BJP, in 15 years, has lowered the heads of Delhiites in shame… In fact, across every street, there’s garbage. Even they are embarrassed. They stopped me on the way here, didn’t want me to see (the Ghazipur landfill).”

“We don’t feel embarrassed. A reporter told me that (BJP MP) Ramesh Bidhuri will visit a Delhi government school. By all means, he should. They (BJP) have deployed police around the landfill. They can’t protect women (bahu betiyan) but can protect a garbage mountain. Have some shame,” he said.

Targeting Union Home Minister Amit Shah, Kejriwal said: “Amit Shah ji recently abused me aplenty and said Kejriwal paise nahi deta, haaye re, de do re, paise re, mar gaya re. Paise, paise, paise. They only ask for money. In 15 years, MCD spent Rs 2 lakh crore… this is public money. Where is the accountability? Rs 1 lakh crore was paid by the Delhi government. I want to ask Amit Shah, how much did the Centre pay to the MCDs?”

He added: “I want to ask the elderly of Delhi, the mothers and sisters of the city, will you tolerate them (BJP) abusing your son (referring to himself)? Delhi will vote on cleanliness this time. We won’t fight the BJP waalas, we will win their hearts. Stay in your party but give Kejriwal one chance. If we don’t clean Delhi in 5 years, don’t vote for us.”

He also said that “rakshasi shaktiyan, asuri shaktiyan (evil forces) have conspired against us”, referring to delimitation of MCD wards and the polls being delayed. “Oppose us if you want,” he said, referring to BJP workers protesting against him. “But only I will educate your children. If someone falls sick at your home, no one from BJP will come to ask about you, only I will get them treatment.”

“A day will come when BJP waalas will join the AAP. A day will come when even Sambit Patra will say BJP bohot gandi party hai (BJP is a very dirty party), aur AAP bohot achi party hai (AAP is a very good party)… I’m a jaadugar (magician), I know how to win people’s hearts. We don’t need to stand with black flags, we win people’s hearts,” he said. “Congress was reduced to zero, and the day is not far when the BJP will be reduced to zero in Delhi too.”

Meanwhile, amid the CM’s visit, AAP and BJP workers came face to face and indulged in sloganeering against each other — while BJP workers, sporting black flags and ribbons, raised slogans against Kejriwal, AAP workers hit back with slogans against Shah and the Prime Minister.

Although police barricaded the road to stop workers from both parties from getting into a scuffle, the protests went on for about an hour which resulted in heavy traffic snarls at UP gate and Ghazipur.

Traffic was normalised around 12.15 pm.

Mumbai: Rickshaw driver held for murdering man who teased him over his limp