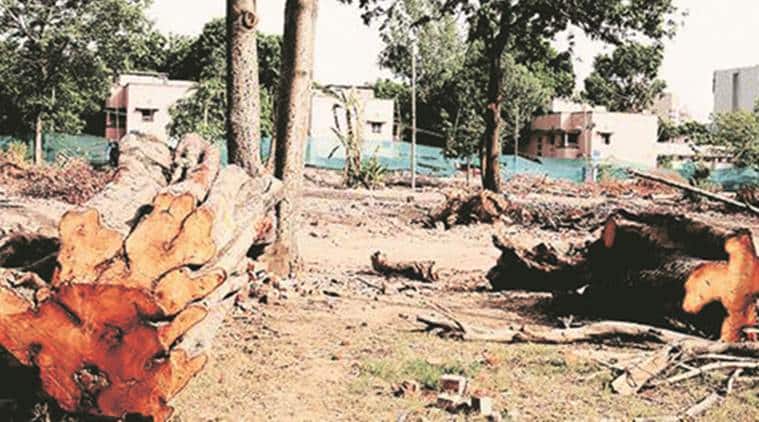 The National Buildings Construction Corporation (NBCC), which is executing the redevelopment project in seven government colonies in South Delhi, applied for permission to axe 1,955 trees in two colonies. The permission was rejected.

The projects had run into controversy last year, when the agency had asked for permission to chop over 14,000 trees, leading to weeks-long protests by citizens and an ongoing court battle. It also forced a rethink from the Ministry of Housing and Urban Affairs, with the ministry as well as NBCC saying no trees will be cut for the project and, if need be, they will be relocated through transplantation.

In January and February this year, NBCC wrote to the Delhi Forest Department, seeking permission to cut 1,955 trees in Netaji Nagar and Sarojini Nagar. Both proposals were rejected by the department, as NBCC had not counted the saplings planted three years ago. This means the saplings, which would have grown into trees in three years, have not been included in the total count of trees in the area.

As per the application sent to the Forest Department’s Deputy Conservator of Forests (South), under whose ambit Sarojini Nagar, Netaji Nagar and Thyagraj Nagar fall, the NBCC sought permission to axe 1,551 trees in Netaji Nagar and 404 in Sarojini Nagar. Permission for transplantation of 39 and removal of four trees for Thyagraj Nagar was also sought. “Yes, they sought permission. The clearance was not given,” said DCF (South) Saurabh Sharma.

As per a court order on October 3, 2018, the High Court had accepted NBCC’s revised proposal concerning the six colonies. This proposal stated that cutting of trees would be avoided, and if not, trees would be transplanted. An NBCC spokesperson confirmed that a new proposal is being chalked out and will be submitted to the Forest Department soon.

The projects, which come under Category A, require clearances from all statutory authorities, including the Forest Department, before commencing any kind of construction work. However, despite no environmental clearance, partial demolition has been done at the two colonies, and construction continues after daylight hours in Netaji Nagar.

“There is no environmental clearance on public record. They are just using the old clearances and not stopping construction activities in the areas,” claimed Vimlendu Jha, an environmental activist of NGO Sweccha, who had filed a contempt petition in June last year against the NBCC for allegedly not stopping with the cutting of trees despite a stay order.

The Environmental Impact Assessment for the project had come under fire as the Ministry of Environment was accused of copy-pasting passages from a report on Chennai, which mentioned lakes. The next date of hearing for the matter is on July 11. Official sources also confirmed no transplantation efforts have started yet in any of the projects.

(The writer is an intern with The Sunday Express)