The Delhi Police on Sunday evening detained the owner of the paper factory where a massive blaze broke out in the morning, killing 43 people at Anaj Mandi in Delhi’s Rani Jhansi road. The fire, which was apparently casued due to a short-circuit, has been doused. CM Arvind Kejriwal has announced ex-gratia of Rs 10 lakh each for kin of the deceased.

A fire broke out in Delhi’s Anaj Mandi on Sunday. (Express photo by Praveen Khanna)

Delhi Anaj Mandi fire Highlights The Delhi Police on Sunday evening arrested Rehan, the paper factory owner, and his manager Fukran, after forty-three people were killed in a massive fire that swept through the building at Anaj Mandi in Delhi’s Rani Jhansi road early in the day.

At least 50 people have been rescued so far. The fire, which erupted due to a short-circuit, has been doused and rescue efforts are underway.

Chief Minister Arvind Kejriwal announced a compensation of Rs 10 lakh each for the kin of the deceased. The government has ordered a probe into the incident and sought a report within seven days.

Prime Minister Narendra Modi tweeted, “The fire in Delhi’s Anaj Mandi on Rani Jhansi Road is extremely horrific. My thoughts are with those who lost their loved ones. Wishing the injured a quick recovery. Authorities are providing all possible assistance at the site of the tragedy.”

The incident came to light when the fire department received a call at 5.22 am following which 30 fire tenders rushed to the spot. Several people trapped inside were rescued and rushed to RML Hospital and Hindu Rao Hospital.

Several people were killed in a major fire that broke out at Delhi's Anaj Mandi early on Sunday. Get latest updates here. Read in Bangla here.

The four-storey building was packed with combustible material and had just one door that opened into a narrow lane, virtually making it a "fire trap", officials said. Dense toxic smoke from burning sewing machines, plastic toys and boxes, rexin rolls, plastic wrappers, card boards, packaging material and garments had engulfed the building, making it difficult to conduct rescue operations, firefighters said. Over 30 fire tenders and several ambulances cramped into congested areas around the building, which housed illegal factories, while nearly 150 firefighters worked to pull out 63 people and douse the blaze. The building, which is an area of 600 sq yards, had just one door and so, fire department personnel cut window grills and metal meshes to enter, the Delhi Fire Services officials said, adding that one fire tender was sent at a time through the narrow lanes. (PTI)

Rajesh Shukla, the additional divisional officer of the Delhi Fire Service, said he had received only a single line of information about the fire. Once at the site, he said the firefighters tried to douse the fire on the first floor when "we heard someone making a phone call about the blaze on the second floor, and directed the water hose towards it." "I thought there was only one man and I would rescue him but when I reached there, the room was filled with people crying for help," he told PTI. "I brought down 10-12 people who were conscious from that room but later we learnt that there was another room where there were more people, numbering more than 30. We learnt (about it) quite late," Shukla said. He said it was a difficult operation since the entire building was filled with smoke. "I went for the second time with a breathing apparatus and by that time, the category of the fire had been upgraded and there were more teams that were sent," he added. Shukla said then his breathing apparatus exhausted and he stayed downstairs. He later went back into the building and got to know that there were nine more persons trapped. "It was a difficult operation and we had to carry a lot of people on our shoulders. I entered the building more than 12 times during the operation," he said. (PTI)

Anaj Mandi fire: Firemen were not aware about presence of people inside factory

When the first firefighters arrived at the site of the deadly blaze in north Delhi, they had no idea so many people were trapped in the four-storey building. The firefighters made their way through dense smoke and flames on the first floor when they overhead a distress call coming from the second, so they rushed to rescue the person, and realised many more were trapped and screaming for help. Rajesh Shukla, the additional divisional officer of the Delhi Fire Service, said he had received only a single line of information about a blaze in a factory in Anaj Mandi area. Once at the site, he said the firefighters tried to douse the fire on the first floor when "we heard someone making a phone call about the blaze on the second floor, and directed the water hose towards it." "I thought there was only one man and I would rescue him but when I reached there, the room was filled with people crying for help," he told PTI. "I brought down 10-12 people who were conscious from that room but later we learnt that there was another room where there were more people, numbering more than 30. We learnt (about it) quite late," Shukla said. (PTI)

Chief Minister Arvind Kejriwal announced an ex gratia of Rs 10 lakh for the families of those dead in the Anaj Mandi fire and promised "strictest" punishment for those responsible for the incident. The Delhi government has ordered a magisterial inquiry into the incident. Kejriwal visited Anaj Mandi and also met the injured admitted to LNJP hospital. He announced a compensation of Rs 1 lakh for those injured in the blaze and said the government will ensure proper treatment for the injured. "It's a very tragic incident. The exact numbers of casualties are being ascertained although over 40 have died. Magisterial inquiry has been ordered. The exact cause of fire will be found after the probe. We will ensure strictest punishment for the guilty," he told reporters. (PTI)

The Delhi Police arrested factory owner Rehan and his manager Fukran, and registered a case under section 304 of Indian Penal Code (IPC) after detaining him. Delhi Police DCP North Monika Bharadwaj said that there is no more possibility of more bodies being recovered.

Delhi Police DCP North Monika Bhardwaj: Owner of the building Rehan and his manager Furkan have been arrested. We are investigating the matter. From the information we have, more or less there is no possibility of more bodies being recovered #DelhiFire pic.twitter.com/CMutI77ryo

A team of Forensic Science Laboratory (FSL) analysed the four-storey building and the possible places from where the fire could have started but could not collect any samples due to the rescue work by the fire department. The four-member team did the first visit and the forensic evidence can only be collected after the fire is completely doused, Laboratory Director Deepa Verma told PTI. "Scientifically, the articles can only be collected after the fire has completely ended and we can get access to the rooms," she said. She added they will ascertain that how many visits to the site will be required. "The team, however, did an outline of the building, by observing the type of building, the outlet from where the fumes were coming out and all the clues that can be collected," she added. Another official from the FSL said the team will again visit the site on Monday. (PTI)

Delhi Police detains Rehan, the owner of the building, from where the paper factory was operating. A case has been registered under section 304 of Indian Penal Code (IPC) against him.

A Delhi Fire Service employee is being hailed as a “real hero” for saving the lives of 11 people in Anaj Mandi area on Sunday. AAP minister Satyendar Jain said fireman Rajesh Shukla was the first to enter the paper factory which caught fire in the residential area. Jain lauded his bravery for saving the lives of several people despite suffering burn injuries. Read more

Anaj Mandi fire: Building filled with carbon monoxide, most fatalities due to suffocation

The NDRF team that entered the building said it was filled with hazardous carbon monoxide. Most workers of the illegal manufacturing units that ran in the four-storey building died due to suffocation. "We found carbon monoxide (CO). After which we searched the area manually. The entire third and fourth floor of the building was engulfed with smoke. The content of CO was more," said Aditya Pratap Singh, deputy commander, NDRF. "There was a room, where most of the workers were sleeping, which had only a single space for ventilation. The maximum number of workers were shifted from the third floor. Due to the burning of the materials present in the building, CO was formed, which explains the reason for high CO content," he added. (PTI)

Congress and BJP leaders on Sunday blamed the Arvind Kejriwal government for the fire accident at Anaj Mandi. Delhi BJP president Manoj Tiwari, who visited the spot along with Union Minister Hardeep Singh Puri, said electricity wires were dangling in the area but no action was taken by government agencies despite repeated complaints. The Congress too blamed the AAP government and the BJP-led municipal corporations for the incident. "Kejriwal government is responsible for this. The MCDs come under the BJP. They are also equally responsible for it," Delhi Pradesh Congress Commitee President Shubhash Chopra said. Tiwari announced an ex gratia of Rs 5 lakh to the families of each victim and Rs 25,000 for treatment to the injured, on behalf of the BJP. The party also cancelled all its programmes on the day in view of the tragedy. (PTI) 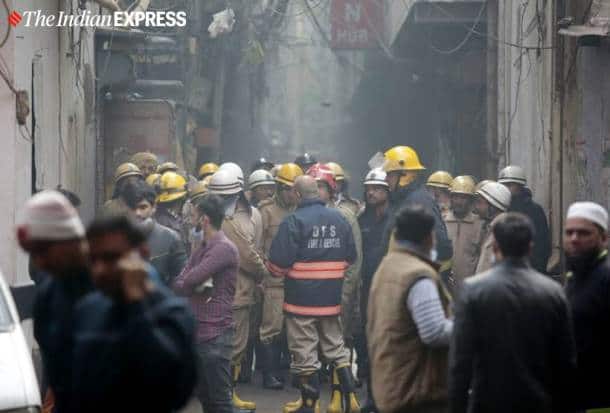 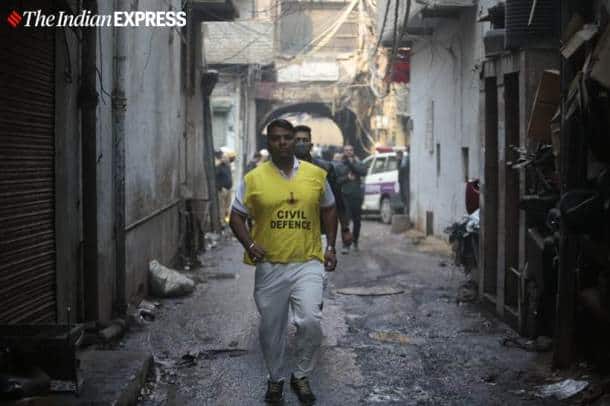 Aam Aadmi Party MP Sanjay Singh question the Municipal Corporation of Delhi and asked why did it not shut the factory in Anaj Mandi when they knew it was operating illegaly and did not have a fire clearance.

AAP MP, Sanjay Singh: If a factory was operating illegally at a house, then, it was responsibility of Municipal Corporation of Delhi to shut it. How did MCD allow the factory to run? Delhi Fire Service has clarified that it didn't give a no objection certificate to the factory. pic.twitter.com/YvUCzLWyw7

Building did not have fire clearance: DFS

Union Minister and BJP MP from Chandni Chowk Dr Harsh Vardhan said that he is immediately returning to Delhi from Jhansi after a major fire broke out in his constituency and killed 43 people. "Extremely saddened at the fire incident that took place in my parliamentary constituency, earlier today. Constantly in touch with the local administration. Immediately returning to Delhi from Jhansi," he tweeted.

One of the first firemen to enter the blazing building in Anaj Mandi area, Delhi Fire Service personnel Rajesh Shukla saved 11 people from the inferno on Sunday. Shukla injured his legs in the rescue operation and is recuperating in LNJP Hospital. Delhi Home Minister Satyendra Jain met Shukla at the hospital. "Fireman Rajesh Shukla is a real hero. He was the first fireman to entered the fire spot and he saved around 11 lives. He did his job till the end despite of his bone injuries. Salute to this brave hero (sic)," Jain tweeted.

Fireman Rajesh Shukla is a real hero. He was the first fireman to entered the fire spot and he saved around 11 lives. He did his job till the end despite of his bone injuries. Salute to this brave hero. pic.twitter.com/5aebB2XLUd

Bihar Chief Minister Nitish Kumar announced a compensation of Rs 2 lakh for the families of the deceased hailing from the state. Relative of a deceased labourer in Delhi on Sunday. (Express photo/Gajendra Yadav)