On Thursday morning, around 300 employees of Hipad Technology, the manufacturer for Chinese phone companies Xiaomi and Oppo, were not allowed to punch in their attendance or enter work premises. They alleged that the company had sent them on “forced leave” as there were no new consignments. 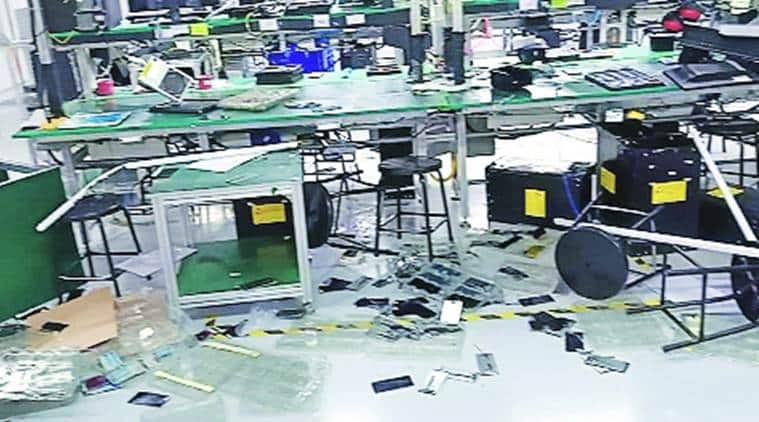 Employees of a Chinese mobile phone manufacturing division were turned away from work on Friday, after 300 of them protested outside office premises a day earlier over alleged “wrongful termination”.

On Thursday morning, around 300 employees of Hipad Technology, the manufacturer for Chinese phone companies Xiaomi and Oppo, were not allowed to punch in their attendance or enter work premises. They alleged that the company had sent them on “forced leave” as there were no new consignments. Protests by the workers at the Sector 63 office soon escalated, with some from the crowd throwing stones at the building and damaging property.

Officers from Noida’s Phase 3 police station rushed to the spot to maintain law and order. “Police force was mobilised and the situation was contained. Four employees of Hipad were arrested and a case under rioting and assault was filed against them. The company has informed us they will be filing an FIR. No complaint has so far been filed against the company by the aggrieved employees,” Superintendent of Police (City) Sudha Singh said.

On Friday, police remained deployed at the office to prevent any tension. The ground floor of the company has been vacated as glass doors were broken on Thursday. Glass windows on the first, second and fourth floors were also broken, and large stones lay inside the premises.

A security official said four-five employees had come on Friday morning to inquire about their employment status, but were not allowed to enter the premises.

“We have been told by the company that there is a misunderstanding about contracts of employees. The company claims workers have confused temporary leave as permanent termination. The number of employees in question is 295. We are in constant touch with the company in case further proceedings have to be initiated,” said SP Singh.

On Friday, a notice outside the office gate stated that employees of the assembly and packaging departments should re-join work on Monday.

Prashant (29) was among those who were turned away on Friday.

“I joined this company three months ago and I work in the assembly division on the night shift. I reached around 7.30 pm, and was told not to enter. It appears I was part of the employee group that had been terminated arbitrarily. I was also told this was due to commotion caused by day-shift workers. I hope it gets resolved soon since our livelihood is at stake.”

Oppo officials were not available for comment. A Xiaomi official said, “It is an internal matter of Hipad and will be dealt with at their level.”

A company source said, “What usually happens in manufacturing is that you have work as long as there is a consignment. Sometimes when there is no fresh project, employees are sent on leave but they are immediately called back in case of a new batch. Most employees confused it with termination. There is still work for 150 members.”

Protest only at designated place, not legal in case of any violence: High Court to contractual teachers