Students read the preamble of the Constitution at India Gate, New Delhi, on Monday.

Citizenship Amendment Act (CAA) Protests: Fresh protests erupted outside Jamia Millia Islamia metro station on Monday, a day after the police crackdown on the university students. People were heard shouting slogans against the Prime Minister Narendra Modi and Home Minister Amit Shah and also set effigies afire. This comes as students from IIT Bombay, IIM Ahmedabad, IISc Bangalore, Mumbai University, Delhi University and other deemed institutions stood in support of the students of Jamia who were assaulted by police while they were protesting against the amended Citizenship Act yesterday.

Authorities at Jamia Millia Islamia University on Monday termed Sunday’s police crackdown against its students as a “war-like situation” and demanded a high-level probe into the incident. The Federation of Central Universities’ Teachers’ Associations (FEDCUTA) also demanded a judicial enquiry into the matter to be done by a sitting judge.

As many as 50 students, who were detained during protests at the Jamia Millia Islamia University against the contentious law in the national capital, were released in the wee hours of Monday. While 35 of them were released were the Kalkaji police station, the remaining 15 were released from New Friends Colony. Over 100 people, including students, policemen and firefighters were injured, after cops lobbed teargas shells inside the college campus, forced their way in, and allegedly dragged students out of the library and the mosque, and assaulted them. Meanwhile, West Bengal Chief Minister Mamata Banerjee called for a mega rally in Kolkata to protest against the citizenship law.

While campuses saw demonstrations during the day, the action shifted to India Gate in the afternoon, with groups of people gathering to read out the Preamble to the Constitution. The air resonated with the slogans of “Delhi Police down down”. Read here

A day after it entered Jamia campus, police stopped young men heading to protest site, took down their names, addresses and contact numbers.

Day after police entered the Jamia campus, reading rooms, mosque, people from many parts reached the area, which saw a wave of protests. Near a local metro station, police stopped young men heading to the protest site, took down their names, addresses and contact numbers. pic.twitter.com/9kXoLJJNG4

Students and alumni from the National Law University expressed solidarity with students from Jamia Millia Islamia, Aligarh Muslim University and other university students protesting against the Citizenship Amendment Act, 2019. 'We strongly believe in the critical importance of freedom of expression of the student protesters, particularly in a university space where students are taught to think and critically analyse social structures, legal instruments and political power. This is a right that needs to be preserved for the continued sustenance of India as a democracy and a nation that has historically provided a fertile ground for different ideologies and views. We condemn the police action in entering the campuses of Jamia Millia Islamia University and Aligarh Muslim University and violent suppression of students within the hostel and library buildings,' a statement issued by the students said.

Referring to Sonia Gandhi's attack on the NDA government for crackdown on university students and anti-CAA protesters, Union Minister Nirmala Sitharaman said that Sonia Gandhi is shedding crocodile tears for students. "Indira Gandhi had sent students to Tihar," she added.

Students protest in colleges across Bengaluru

Student protesters gathered in IISC, Bengaluru Town Hall and other colleges to show solidarity with their counterparts in Delhi.

#CAAProtests: Student protesters gathered together in @iiscbangalore, #Bengaluru Town Hall, and in other colleges in solidarity with their counterparts in Delhi on Monday. @IndianExpress

Former Indian cricket team seamer Irfan Pathan expressed concern after several students of Jamia Millia Islamia were injured in a police lathicharge during protests against the Citizenship Amendment Act. The injured students were taken to a nearby hospital in South Delhi.

“Political blame game will go on forever but I and our country is concerned about the students of #JamiaMilia #JamiaProtest,” Pathan wrote on Twitter. Read more

From the Supreme Court to Kolkata’s Esplanade, from Banaras Hindu University to IIT-Madras, the vortex of the amended Citizenship Act found resonance across the country on Monday, a day after police crackdown on students at Jamia Milia Islamia left over 100 people, including students, policemen and firefighters, injured.

Here's how student protests panned out across India on Monday.

Students from IIT Bombay, IIM Ahmedabad, IISc Bangalore, Mumbai University, Delhi University and other deemed institutions stood in support of the students of Jamia who have been protesting against the amended Citizenship Act. 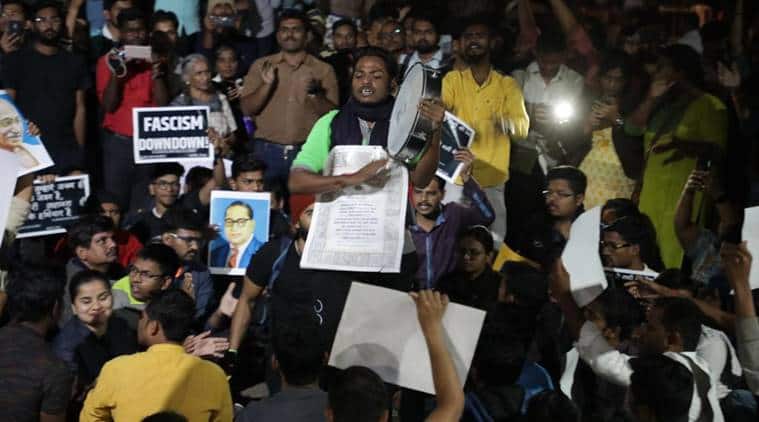 Reading of the preamble of the Constitution at India Gate, Delhi, today. pic.twitter.com/UUCWtIpJ0C

Normal services have resumed in all stations.

Protests against Citizenship Amendment Act continue in Bengaluru. Students from various colleges gather together to express dissent against CAA, NRC and ‘police brutality’ against students of Jamia Millia Islamia in New Delhi.

#CAAProtests continue in Bengaluru| Students from various colleges gather together to express dissent against #CAA, #NRC and ‘police brutality’ against students in Delhi. @IndianExpress pic.twitter.com/cisx9aOB8h A protester holding a placard standing near the Jamia metro station. (Express photo)

As the protesting crowd at Jamia station tries to push ahead, a group of students from Jamia Millia Islamia try to stop them, urging to find innovative ways to register dissent in a more effective manner. Students urging people to return to their homes and clear the area.

Modi govt has started a war on country and its people: Sonia Gandhi

Attacking the BJP-led NDA government over the crackdown on university students and anti-CAA protesters, Congress interim president Sonia Gandhi said the Narendra Modi government has started a war on the country and its people.

In a statement, Gandhi said, “A government’s work is to maintain peace and harmony, to run law and order and save protect the Constitution. But the BJP government has launched an attack on the country and its people.” Read more

An injured protester being taken away, in New Delhi on Sunday. (Express photo by Gajendra Yadav)

Elsewhere in the country, protests spilled over to a third day in West Bengal where at least 15 railway stations and two local trains were vandalised, while an internet clampdown continued in Assam, where the agitation first turned violent last week.

In Delhi, the day started with students of Jamia organising a “community march” to mobilise people for a Parliament march “in the near future” and inform local residents about the new law, which grants citizenship to Hindus, Sikhs, Buddhists, Christians, Jains and Parsis — but not Muslims — who entered the country from Pakistan, Bangladesh and Afghanistan until December 31, 2014.

However, as the crowd swelled, a section of protesters grew restive and insisted they march to Parliament today itself. Violence broke out when some protesters tried to reach the Ring Road but were stopped by police from going further.

The situation on the campus escalated around 6.45 pm, when police personnel in riot gear dragged out four-five students and beat them with lathis before putting them inside a bus. Teargas shells were simultaneously lobbed inside the campus as protesters retaliated by hurling stones at personnel gathered at the gates.

At around 7 pm, over 100 students were taken out of the campus in a line with their hands in the air. They said they had been brought out from the central library.

University authorities, meanwhile, dissociated themselves from the protests and said local residents were indulging in stone-pelting and arson.

Delhi Chief Minister Arvind Kejriwal expressed concerns over the "deteriorating law and order situation" and sought an appointment with Union Home Minister Amit Shah in this regard. The Supreme Court, on the other hand, took note of the violence and agreed to hear on Tuesday a batch of petitions on the condition that all rioting must stop.