CAA protests: How lawyers got detainees out

The Indian Express spoke to lawyers who worked behind the scenes till early Saturday morning, arguing in late night hearings, calling up senior police officers and law ministry officials to allow them to meet the detainees. 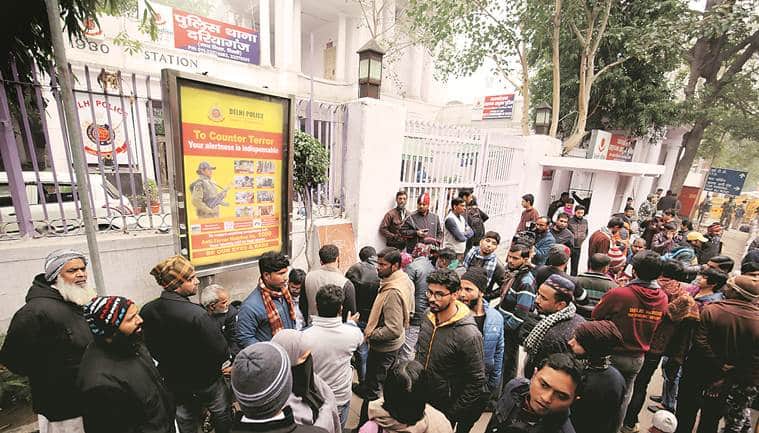 Outside two police stations in Delhi, late Friday night stood a bevvy of lawyers who rushed thereafter news reached of men and minors being detained after violence erupted in Old Delhi’s Darya Ganj and North East Delhi’s Seemapuri.
At Darya Ganj police station, they met with locked gates, and so a quick visit to the local magistrates was made, but they were unavailable. Relief came when Chief Metropolitan Magistrate Arul Verma directed police to allow legal and medical aid to the detainees and called it “flagrant violation of law” to detain minors.

The Indian Express spoke to lawyers who worked behind the scenes till early Saturday morning, arguing in late-night hearings, calling up senior police officers and law ministry officials to allow them to meet the detainees. Among them was advocate Adit Pujari, who reached the residence of CMM Arul Verma. Pujari said, “Advocate Kriti Awasthi filed the application and I argued the matter before the CMM, who then called up the Naib court and the SHO of Darya Ganj police station and assessed the situation. He passed an order in our favour at 10.30 pm.”

Meanwhile, advocate Tara Narula managed to enter the Darya Ganj police station after much persuasion and found at least 32 men detained and over 15 minors kept inside. A law graduate from the UK, Narula said, “We wanted a list of all the detainees so as to draft applications for them. The protesters were scared and the police didn’t provide us with the list. We got the parents of some minors to collect them.”

Apart from the police station, lawyers found locked gates at Lok Nayak Hospital too, where at least 45 people were admitted after violence erupted in the area. Among them was advocate Anas Tanwir, who runs Indian Civil Liberties Union, a pan-India network of lawyers. Busy drafting bail applications of those detained in the Darya Ganj protest, he said, “When the state does not uphold our rights, it becomes the duty of the lawyers.”

Similar scenes played outside Seemapuri police station till early Saturday morning, as seven lawyers transcribed complaints of family members of the 20 detained. Among them was Devna Soni, partner at Kred-Jure advocates, who coordinated with families and lawyers outside the station, and also spread the word on WhatsApp. “Here are people who are unable to defend themselves. I felt compelled to stay,” said Soni. Even though two lawyers made it inside the station, they were not allowed to meet the detained. On Friday evening, protesters had allegedly pelted stones at police, injuring an Additional DCP-rank officer.

Choudary Ali Zia Kabir, an advocate at Human Rights Law Network, said, “All we wanted was our statutory right. What kept us going till morning was we didn’t know who was injured and how much.” Till early morning, lawyers drove from Seemapuri to Pitampura and then Saket, in search of the home of Karkardooma Court’s CMM.

At 4.30 am, the CMM signed the order, and the lawyers drove back to Seemapuri.

India-China border talks: ‘Each side to respect other’s concerns’