Are leopards making Delhi’s urban forest their home? New report has the answer

Data for the study, which began in June 2021, was collected using camera traps which provided 111 images of leopards -- of these, eight unique individuals were found in the sanctuary, which spans 32.71 sq km. 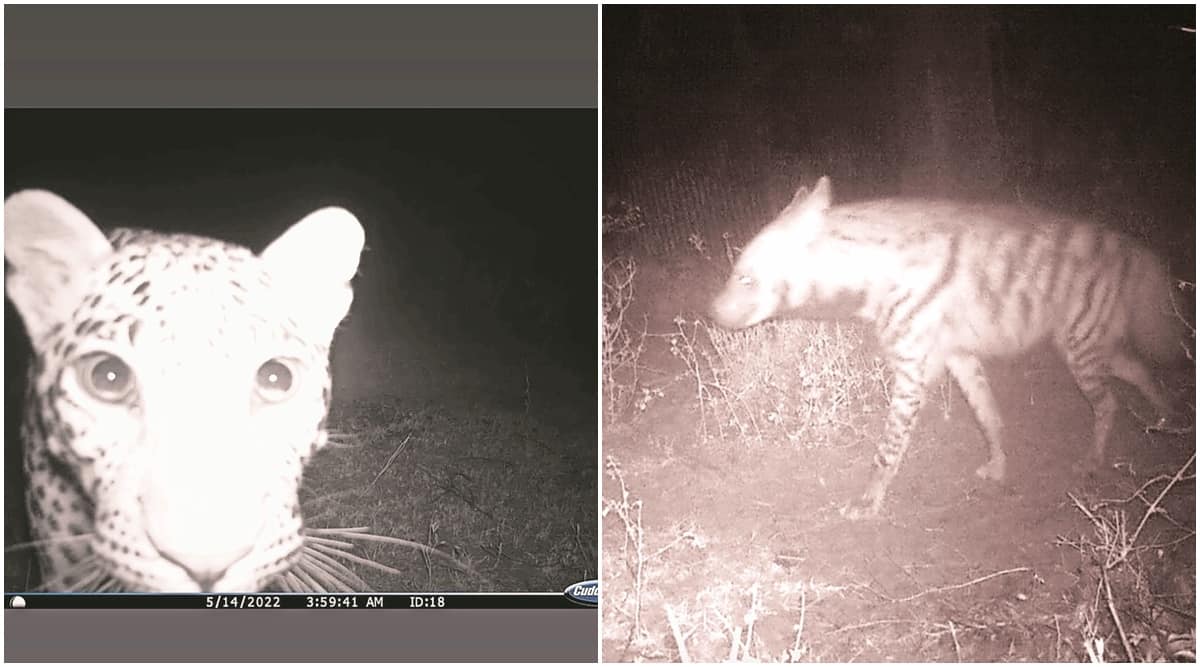 🔴 Eight leopards caught on camera, 2-4 striped hyenas — and the relationship that plays out between the two.

🔴 “(The leopards) have been found roaming the same tracks once and even twice in the same week multiple times. This suggests that they have made this urban forest their permanent home.”

THESE ARE are some the key portions of a report on a year-long study by the Bombay Natural History Society (BNHS) and the Delhi Forest Department to document the presence and distribution of leopards and other mammals in the Asola Bhatti Wildlife Sanctuary (ABWS), which is part of the Ridge in South Delhi.

Read in Explained |Cheetahs and others: know the 7 big cats

Data for the study, which began in June 2021, was collected using camera traps which provided 111 images of leopards — of these, eight unique individuals were found in the sanctuary, which spans 32.71 sq km.

The report notes that the sanctuary is part of the Sariska-Delhi wildlife corridor in the Aravallis that runs from the Sariska Tiger Reserve in Rajasthan to the Delhi Ridge. The presence of leopards at Asola Bhatti points to the significance of this wildlife corridor, it states.

Sohail Madan, Assistant Director, BNHS, said, “One of the reasons that the study was done was to show that the Asola Bhatti Wildlife Sanctuary is not an ecological island. If you make a sanctuary, build a boundary wall, malls and highways around it, it becomes like a zoo where the animals get trapped inside and have no long-term viability. This corridor makes sure that the sanctuary is not an island and that there is viability.”

“ABWS has always been affected by anthropogenic pressures from nearby settlements and roads. Despite this, leopards and other mammals are still thriving inside this forest which is a positive indicator for the health of the ABWS ecosystem,” the report states. Parts of the sanctuary comprise abandoned mining pits.

“The roads and increased traffic along the stretch means that leopards come in contact with fast-moving vehicles along this corridor, including along the Gurgaon-Faridabad highway. This landscape falls into different jurisdictions — Haryana, Delhi, Rajasthan — and there needs to be a population study of leopards and hyenas and other animals on the Haryana side as well, besides protecting these areas in Haryana,” Madan said.

There are around two-four striped hyenas at the sanctuary, with their maximum presence close to the Gurgaon-Faridabad highway, according to the report. The striped hyena, a nocturnal animal, has been listed as “near threatened” by the International Union for Conservation of Nature (IUCN). But a lack of clear photographs meant that individual hyenas could not be identified.

Madan explained that there are certain areas of the sanctuary where the hyenas “follow” the leopards and co-exist. Scavengers like hyenas follow predators like leopards, he added. The report says that it could point to similar prey base preferences.

The report specifies that the area around the Neeli Jheel in the sanctuary is one of the areas frequented by leopards, being a water source for the animals. The leopards feed mostly on monkeys in the forest.

“The belief that leopards can coexist alongside human settlements holds its ground in this study,” according to the report. The study is set to continue for another two years.

Hours earlier, Uddhav told EC: Shinde camp not in bypoll, it is proxy for BJP