An Asian-themed bar in GK-I is taking its cocktails pretty seriously. 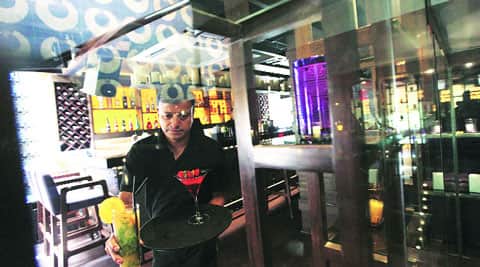 The interiors of Aniq.

The markets of Greater Kailash I and II have been enjoying a sort of culinary renaissance with several new establishments opening up recently. One such place is a three-floored structure, each storey with a separate plot: a dim sum house; a Thai restaurant; and an Asian-themed Bar. We head to the last one, Aniq, that is located on the building’s crown, overlooking GK-I, N-block market’s tiny emerald park.

The place is dimly lit, like a monk’s cave, but dominated by wood and embossed metal. A long bar serves as the focal point of the room around which are arranged low tables and settees. Engraved Chinese cabinets, Oriental-styled stone and ceramic jars set in wall niches, and other bric-a-brac from the region complete the space. The bar extends to a terrace, armed with desert coolers to combat the sweltering heat, while touch lamps illuminate every table.

The bar menu boasts of an extensive liquor collection with the single malt selection being specially arresting stocked as it is with Lagavulin, Caol Ila and Cardhu (complete with tasting notes) apart from the usual Glens. The cocktail menu takes after its surroundings; the bar’s signature cocktails are all with Asian names and flavours, while Asian ingredients carry on to the Martini section as well. The prices are as per south Delhi norms, the average cost of a cocktail being around Rs 425, the cost of spirits varying according to their stature. The food menu borrows from the dim sum house and Thai restaurant below and offers dumplings and salads. While quiet around 8 pm, the bar gets filled as the evening progresses.

We order a couple of signature cocktails with unpronounceable names and a Chilli Coriander Martini because it gets embarrassing to point after a while. The signatures, one comprising vodka and cointreau with basil and pepper and lemon juice, the other a sort of spicy Guava punch go down far smoother than their names, accompanied by kicks worthy of a Karate master. The martini though remains our favourite, the pounded chilli masking the bitterness of the gin and vermouth and leaving more than a tingle on the lips. The Sour Pepper Beijing Dumpling, comprising mixed vegetable and chicken dumplings served dipped in a piquant pepper sauce take things, er tingles, along even further. In fact, we’ve seldom smacked our lips so much.

The Other Side of Midnight