27 hotels in Mahipalpur locked down on NGT order 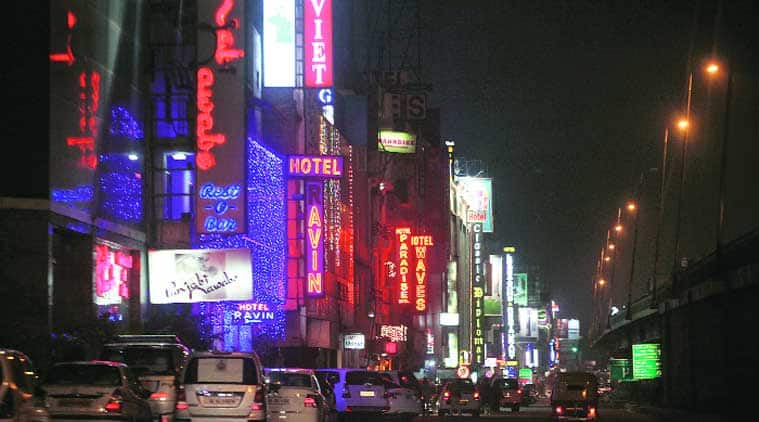 The Mahipalpur stretch of budget hotels. The DPCC found that they didn’t have consent to establish or operate, which are mandatory to run hotels in Delhi. (Source: Express Photo by Oinam Anand)

The Delhi government on Friday locked the doors of 27 hotels in the Mahipalpur area that were operating without permissions from civic agencies and the Delhi Pollution Control Committee (DPCC), while 50 more hotels face closure.

After being directed by the National Green Tribunal (NGT) to inspect these hotels, the pollution watchdog had found that these hotels along the NH-8 Expressway towards the airport were illegally drawing groundwater and operating against the norms.

Delhi Environment Minister Asim Ahmed Khan confirmed that the government has cracked down on 77 budget hotels operating without licence. He said the crackdown was part of the implementation of the NGT order.

“These hotels were drawing underground water and do not have licences from the civic bodies, police or fire department,” Khan said.

One of the hotels, Taurus International, had filed a plea before the NGT seeking directions to revoke the DPCC’s closure orders.

Consequently, the NGT had directed the DPCC and other agencies to conduct a joint inspection of hotels near the Indira Gandhi International Airport to check if they were following norms.

The pollution body found that the hotels were drawing water from about 30 borewells — 17 of which were community borewells built by utilising MLA LAD funds. “The rest were illegally sunk by the hotel owners,” a DPCC official said.

The DPCC also found that the hotels didn’t have consent to establish (CTE) or consent to operate (CTO), which are mandatory to run hotels in Delhi. CTE is the first step for any industry or trade to begin operations and the permission is given within four months of it being applied for. The CTO is given by the DPCC.

“Both permissions are a mandatory part of the processes in place for ensuring that water and air are not polluted. However, the DPCC did not grant permission to these hotels as they didn’t have any clearances from the municipal corporations. The hotels were in an unauthorised areas and the corporation couldn’t grant them the clearance,” an environment department official said.

The NGT bench had on Monday asked the Central Groundwater Authority (CGWA), “What is the water table at Mahipalpur? On what basis were permissions given for so many community borewells?”

According to the CGWA’s own reports, the water table in South Delhi has reached critically low levels. The bench also raised concerns about traffic congestion caused in Mahipalpur due to the hotels.

The counsel for the hotels had denied the charges of extracting groundwater from multiple borewells and had said that there were only four. The rest were community borewells, he said. “We have only four. The others are community borewells. There are irregularities in the inspections,” he said. He also pleaded before the bench on Monday that the livelihood of hundreds of hotel staff depends on its decision.

The NGT has reserved its judgment in the case.