Such garbage dumps can be seen across the city. Amritsar was ranked 258th among 434 cities in Swachh Survekshan 2017. The city lost huge points during annual survey as it has no solid waste treatment plant. 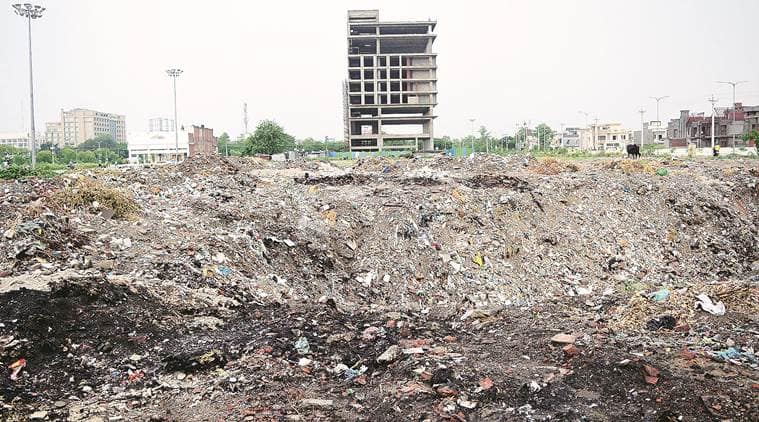 JUST 100 metres from the offices of the municipal corporation and improvement trust, there is an illegal solid waste dumping site in the posh locality of Ranjit Avenue in Amritsar.
Recently, local environmentalist Gunbir Singh had posted a video on Facebook showing solid waste being burnt at this site in violation of norms.

Cricketer-turned-politician, MLA from Amritsar (East) Navjot Singh Sidhu is also the state’s local bodies minister. Working under his department, neither the civic body nor the improvement trust are not ready to own up to this happening near their offices.

Civic health officer Raju Chauhan said, “The improvement trust is responsible for cleaning the site that falls in Ranjit Avenue. We had written to them to maintain this garbage dumping site used by them as a collecting centre. They collect garbage here to transport to Bhagtanwala dump. They have not taken any action. We will again write to them.”

Improvement trust senior engineer Rajiv Shekhri said, “That is not our garbage collecting centre or dumping site. The site you are talking about is sold and it is not in our possession. Sometimes people use this place to dump the waste illegally. You have brought it to our knowledge. We will clean it.” He claimed that his office had not received any letter from the civic body in this regard.

Such garbage dumps can be seen across the city. Amritsar was ranked 258th among 434 cities in Swachh Survekshan 2017. The city lost huge points during annual survey as it has no solid waste treatment plant.

The previous SAD-BJP government had announced to set up a solid waste treatment plant near Bhagtanwala locality falls in Amritsar South assembly constituency on the outskirts of the city.

Terming it harmful for the locals, this proposal was strongly opposed by then Amritsar South SAD MLA Inderbir Singh Bolaria, who had finally quit over this issue and joined the Congress.