Vellore Lok Sabha election result LIVE updates: Counting has begun at the centre. Follow us as we bring you live updates on the election in the constituency, candidates, voter turnout and counting of votes.

Vellore, Tamil Nadu Lok Sabha Poll 2019 Counting Live Updates: DMK’s Kathir Anand cemented the party’s victory in Vellore today, after winning the election in the constituency by a margin of 8141 votes. Counting for the election had commenced at 8 am at Ranipet Engineering College in Vellore amid tight security. With the counting having come to an end, DMK clinched their win with a total of 485,340 votes, while AIADMK came a close second with 477,199 votes.

With this win, the number of MPs in the DMK-Congress alliance has risen to 38. The counting process in Vellore was a close competition, much like the election in the constituency itself, with the trends continuously juggling in favour of both the parties.  LIVE updates in Tamil

Both the AIADMK and DMK had campaigned heavily for the election in the constituency. Tamil Nadu Chief Minister Edappadi K Palaniswami and Deputy Chief Minister O Panneerselvam were seen campaigning for Shanmugam, while DMK chief M K Stalin and youth wing secretary Udhayanidhi Stalin had campaigned for Kathir Anand. Vellore is known for its sizeable minority population, which includes 21 per cent Muslims and 9 per cent Christians, besides 20 per cent Dalit votes.

Get Vellore Lok Sabha Poll 2019 Counting news today with live updates on counting of votes in the constituency through the day. For updates in Vellore Lok Sabha Election Updates in Tamil, follow our IETamil Live Blog | Also read our Bangalore News Live Updates |

The Election Commission has declared DMK candidate Kathir Anand as the winner in the Vellore Lok Sabha election. DMK leader MK Stalin has thanked the voters and said people have rejected AIADMK's fake propaganda. "I thank the voters for helping DMK capture the Vellore fort. Once again you have proved that DMK's victory can only be delayed but cannot be stopped," Stalin said. With this win, the number of MPs in the DMK-Congress alliance has risen to 38. 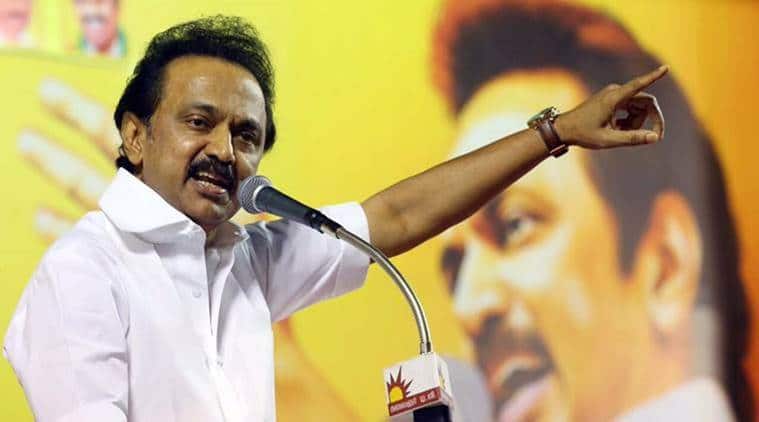 Speaking to the reporters at Vellore after DMK's nail-biting victory, senior leader Durai Murugan, said "Minorities have always favored DMK. I thank everyone for this; no victory is just an ordinary one, this is similar to that. The victory proves that the people of Tamil Nadu believe in our leader MK Stalin." DMK cemented their victory in Vellore, with candidate Kathir Anand winning the closely contested election by a margin of 8000 votes.

One of the biggest victories for DMK: Former DMK Minister K Ponmudy

Former DMK Minister K Ponmudy has said AIADMK has lost this election despite using its money power. "AIADMK has used its money power to influence voters in few constituencies but still they weren't able to defeat DMK. This is one of the biggest victories for DMK," he said.

DMK secures lead by a margin of 8000 votes

With counting underway for over six hours now, DMK continues to remain in the lead by a margin of 8286 votes.

With Kathir Anand leading the results by a margin of 8000 votes, DMK cdres have already begun carrying out premature celebrations at the party's headquarters in Chennai.

Meanwhile, officials have announced that 12,000 votes are yet to be counted before the process comes to an end.

Vellore poll has entered its final stage. At the end of the 19th round, DMK's Kathir Anand is leading the battle with by a margin of 8,460 votes. Only 12,588 votes are left to be counted. According to reports, the counting has been concluded in constituencies like Vellore, Vaniyambadi, KV Kuppam, and Anaikattu. While Vellore, Vaniyambadi and KV Kuppam voters have favored DMK,  the ruling party has captured Anaikattu constituency.

DMK is still in the first position, leading by a margin of 9188 votes.

Officials at the counting centres in Vellore have stated that another 18,987 votes are left to be counted before the results of the election can be given.

AIADMK leads in Anaikattu constituency by a margin of 9000 votes

With 19 rounds of counting done at Anaikattu, AIADMK has taken the lead by a margin of 9538 votes.

At the end of 16th round, DMK's Kathir Anand is leading the contest

Even with AIADMK slowly catching up to DMK, the latter leads the counting by a margin of 10,277 votes.

According to the reports,  a total of eight lakh votes have been counted so far and approximately two lakh votes are still left in the Vellore Lok Sabha election. DMK's Kathir Anand leads by 9,324 votes.

With DMK leading by a margin of 9403 votes, supporters of the party in Vellore have begun carrying out premature celebrations.

The neck to neck competition seems to be tipping in favour of DMK, with AIADMK trailing by a margin of 10,802 votes.

DMK continues to remain in the lead by a margin of 12,000 votes

With AIADMK slowly catching up to DMK, the latter continues to remain in the lead by a margin of 12,925 votes. With DMK in the lead, AIADMK seems to be catching up, with the margin of votes between the two having dropped to 14,874 votes.

Clinching the lead with a steady performance, DMK is leading the race by a margin of 17,198 votes.

This is the first time since becoming the Chief Minister in 2017 that Edappadi has dropped a minister. The Tamil Nadu government’s cabinet’s strength has now reduced to 31.

With the 72nd Independence Day right around the corner, officials at the Chennai International Airport (MAA) near Meenambakkam have stepped up security at the premises after receiving a high-security alert.

In a tweet which was posted on Wednesday, MAA announced that the airport will be kept under tight security until the end of the month and urged passengers to arrive early at the airport for a smooth flight.