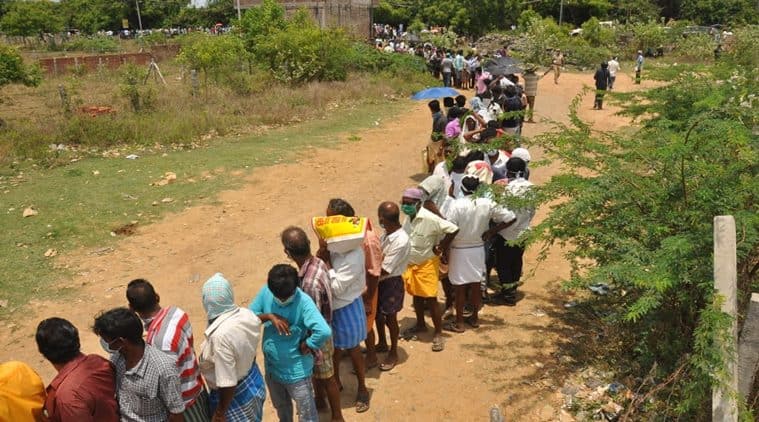 People were standing in long queues since early morning to get their coupons without which they will be unable to buy the liquor bottles. (Express Photo: Srinivas K)

Tamil Nadu State Marketing Corporation (TASMAC) liquor shops reopened in Tamil Nadu on Saturday, a day after the Supreme Court stayed the Madras High Court’s order to close all outlets in the state.

All shops, excluding the ones in containment zones and those located in Chennai and Tiruvallur districts, were allowed to open from 10 am on Saturday. Shops in Kancheepuram and Chengalpattu district borders were also barred from selling alcohol as they fell under the jurisdiction of the Greater Chennai Police. Apart from these, shops located inside malls and shopping complexes were also restricted from selling liquor.

With liquor shops opened once again, there were long queues from early in the morning as people lined up to get coupons without which they can’t buy bottles. Some people even broke a pumpkin, and performing an aarti before collecting their liquor. Unlike the last time, however, tipplers were not asked to produce their Aadhaar cards. A man walks out of a TASMAC liquor store on Saturday. (Express Photo: Srinivas K)

As per the guidelines issued by the TASMAC, liquor shops were provided with tokens in seven different colours. Each shop was instructed to disperse only 500 tokens per day. Customers were also instructed to wear masks.

Cannot control tears… nothing but a human tragedy: Madras HC on migrants

The Madras High Court Tuesday observed that migrant labourers and the agricultural workforce have been neglected amid the coronavirus pandemic. “One cannot control his/her tears after seeing the pathetic condition of migrant labourers shown in the media for the past one month. It is nothing but a human tragedy…” a Division Bench of Justice N. Kirubakaran and Justice R. Hemalatha said, reported news agency PTI.

It was hearing a habeas corpus petition filed by advocate Suryaprakasam, who sought direction to produce Ilayaraja and 400 others who have allegedly been illegally detained in Maharashtra’s Sangli district.

The HC sought a report from the state government and the Centre by May 22.

Hundreds of Indian workers who are in the UAE and Saudi Arabia are struggling to return to their native states. Severely hit by the lack of jobs and money, they are appealing to state and the Central governments to arrange special flights to bring them home.

More than 400 Tamilians are stranded in different areas of Saudi Arabia such as Jeddah, Dammam, and Riyadh. The industries are situated in Rabigh city near Jeddah and Jubail, which is near Dammam. There are scores of Indians around these industrial areas.

Some of the stranded Indians are staying in apartments while others are in quarantine camps.

The Greater Chennai Corporation (GCC) has ramped up action on a war-footing after 27 new cases were reported in Kannagi Nagar in the city. The GCC will be focusing on the distribution of masks and liquid soaps and will set up fever camps and quarantine centres to help treat the patients.

The GCC has declared 33 localities in Chennai as non-containment zones after no new cases were reported for the past 14 days.

According to a list released by the GCC, these include a locality each in Thiruvottiyur, Manali, Royapuram, Kodambakkam and Adyar zones, nine in Thiru-Vi-Ka Nagar zone, five in Ambattur zone, seven in Teynampet zone and seven in the Valasaravakkam zone.

#Update
No new case reported in these containment zones in the past 14 days. Hence, these places will be declared non containment zones from today.#Covid19Chennai#GCC #Chennai#ChennaiCorporation pic.twitter.com/bk2bbpRdvL

Thousands of migrant workers who were stranded in various districts in Tamil Nadu left for Madhya Pradesh and Bihar on Saturday. A Shramik Special train bound for Rewa departed from Puratchi Thalaivar Dr. M G Ramachandran Chennai Central station at 12.40 pm with some 1,400 passengers. Another train running between Muzaffarpur and Tuticorin with 1,380 labourers departed from Tuticorin station at 2.45 pm. A third train carrying 1,460 passengers from Tiruppur to Muzaffarpur departed at 3.30 pm.

All the passengers were screened thermally and instructed to follow social distancing while boarding and travelling.

Mizoram: Churches to be used as quarantine facilities