Tamil Nadu Chennai Coronavirus (Covid-19), Lockdown Latest News July 22, 23 Highlights: As many as 4,13,857 people have entered Tamil Nadu through various modes of travel and 4,995 of them have tested positive.

A total of 84 people have tested positive for COVID-19 at Raj Bhavan, the official residence of the Governor of Tamil Nadu. 84 out of 147 people working in Raj Bhavan, including four police officers and firefighters have been affected by the virus. (Representational)

Tamil Nadu Chennai Coronavirus News July 22, 23 Highlights: Tamil Nadu on Wednesday reported 5,849 fresh Covid-19 cases – the highest in a single day, taking its tally to 1,86,492. The total number of cases on Wednesday included 74 returnees from other countries and states.

With 522 deaths in the past 24 hours, including 444 deaths notified after report of Death Reconciliation Committee in Greater Chennai Corporation, the toll reached 3144.

A bulletin by the Tamil Nadu Health Department added that the committee has recommended that an additional 444 deaths would fall under the category of Covid death as per the ICMR guidelines though such cases were medically considered dead due to co-morbidity or other terminal illness.

Tamil Nadu recorded its highest ever single-day count till date, with 6472 fresh cases reported in the state on Thursday. With this, the state COVID-19 tally has risen to 1,92,964. Among these, Chennai reported 1336 positive cases, bringing the city's total to 90,900.

According to a bulletin released by the Health and Family Welfare Department of Tamil Nadu, 21,57,869 samples from the state have been sent for testing till date, with 62,112 samples having been sent today.

Lessons for school students to be televised from August 1

The lessons for school students in Tamil Nadu are to be televised from August 1 through 14 channels, said state Education Minister K A Sengottiyan on Thursday.

A decision on the syllabus and re-opening of schools would be decided by an 18-member expert committee, the Minister said at Nambiyur village in Erode district, where he inaugurated developmental works worth Rs 2 crore. A total of 52 lakh students have been given laptops free of cost, he said, adding that the Chief Minister K Palaniswami has already inaugurated the televised classes.

The Minister's announcement on online classes during COVID-19 times triggered a debate since the students of government schools hail from poorer sections of society and might not have the wherewithal such as smart mobile phones. Considering this, a decision was taken to televise the classes.

A total of 19 legislators have tested positive for COVID-19 in the state, including four state cabinet ministers. Among the 19, one minister has recovered and rejoined duty, while one MLA had succumbed to the virus in May.

Puducherry Chief Minister V Narayanaswamy has announced a relief package of one lakh rupees to the families of each person who has succumbed to the virus in the union territory.

Sathankulam police inspector Sridhar, who was imprisoned in Madurai Central Jail for his alleged involvement in the custodial deaths of P Jeyaraj and has been taken to Government Rajaji Hospital (GRH) in Madurai for treatment. He was taken to hospital after he complained of neck pain.

Including Sridhar, ten police officers have been arrested and imprisoned in the same central jail for their alleged involvement in the custodial deaths of P Jeyaraj and J Bennix.

The first phase of human trials of Covaxin, an indigenous Covid-19 vaccine, began in SRM Medical College Hospital and Research Centre in Chennai at 9 AM on Thursday. SRM is one of the 12 institutions that have been chosen for conducting human trials.

The Election Commission of India has, in public interest deferred the by-polls which were due for election up to September 7, 2020, till the situation becomes conducive for holding elections. In Tamil Nadu, bypolls to Gudiyatham and Thiruvotriyur constituencies deferred.

A total of 84 people have tested positive for COVID-19 at Raj Bhavan, the official residence of the Governor of Tamil Nadu. 84 out of 147 people working in Raj Bhavan, including four police officers and firefighters have been affected by the virus. They have been quarantined by the health department, while Raj Bhavan has been disinfected by employees from the Greater Chennai Corporation (GCC).

A release from Raj Bhavan stated that none of the affected individuals had come in contact with the Governor or other senior officials.

Head constable Murugan who was involved in the custodial deaths of father and son, P Jeyaraj and J Bennix respectively, has been denied bail by the Madurai Bench of Madras High Court.

P Jeyaraj, 62 , and J Bennix, 32 had been taken into police custody by Sathankumalm police officers in the evening of June 19. The police took P Jeyaraj into police custody for alleged violation of prohibitory orders by keeping his mobile shop open in the evening. J Bennix who went to the police station appealing for the release of his father was also taken into custody.

It is alleged that the father son duo were tortured by beating in the police station. A total of 10 policemen have been arrested so far in the case.

TN has recorded third highest COVID-19 deaths in the country

The number of new infections from across the country jumped to almost 46,000 on Wednesday. That means more than 12.38 lakh people have so far been found to be infected with the virus in India, out of which 7,82 lakh have already recovered. Andhra Pradesh on Wednesday reported more than 6,000 new cases to take its total caseload to over 64,000 now. Even Tamil Nadu or Karnataka, two states with large caseloads and a recent history of big surges, have never crossed that number.

Tamil Nadu did come close on Wednesday, though, with over 5,800 new cases, a big jump from the numbers it had been reporting in recent days. For close to a month, Tamil Nadu had been detecting between 3,500 and 4,800 new cases every day. As a result, its growth rate (seven-day compounded daily growth rate) had fallen below three per cent.

Wednesday’s jump could be a result of data reconciliation exercise happening in the state. At least, that is what led to the addition of 518 deaths to the state tally on Wednesday. The state said 400 of these were unreported deaths from previous days that have been discovered due to an ongoing exercise to match and clean up data.

Tamil Nadu has recorded the third highest number of Coronvirus-related deaths in the country, after Maharashtra and Delhi. Maharashtra has registered over 12,500 deaths till now, while Delhi has had more than 3,700. The overall death toll in the country is close to 30,000 now.

Govt receives Rs 394.14 cr as contribution in fight against Covid-19

The Tamil Nadu government on Wednesday said that it has received Rs 394.14 crore as contribution in its fight against Covid-19 from members of the public, philanthropists, corporates and various associations. 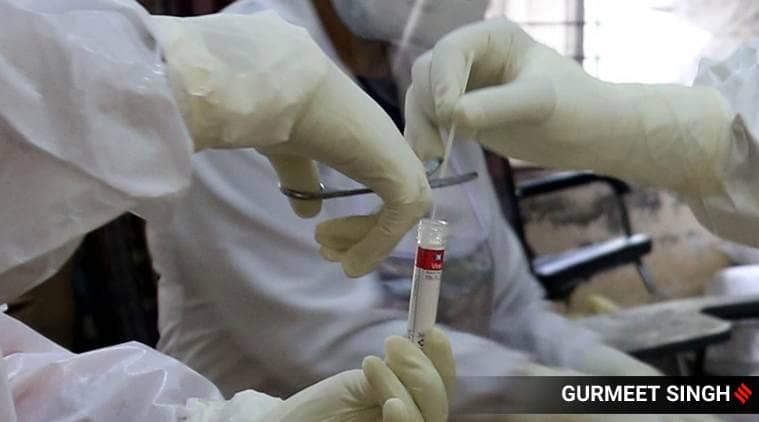 Tangedco has announced a powercut in parts of Chennai today from 9 am to 2 pm to carry out maintenance work.

The Centre on Wednesday informed the Madras high court that 58 more Vande Bharat Mission flights are scheduled to land in Tamil Nadu returning stranded residents of the state from across the globe due to the COVID-19 induced lockdown. "Of them, 41 will land in Chennai, 11 in Trichy, 4 in Coimbatore, and 2 in Madurai," additional solicitor general of India R Sankaranarayanan said.

Recording it, a division bench of Justice M M Sundresh and Justice R Hemalatha cited a report published in an English daily. According to the article, three flights from Dubai and Abu Dhabi were reported to have landed in Chennai empty as there were no passengers to take the flights.

To this, senior advocate P Wilson representing DMK said that travel agents are booking the whole flight and later selling the tickets at high rates. Wilson further submitted that only because of court intervention more Vande Bharat Mission flights were provided which helped all the stranded passengers to reach their destinations till today. He submitted that even going by the Union governments reports filed of 149 flights required to bring 25,939 stranded passengers, only 58 flights have been provided. More flights are required to bring back all stranded residents of the state, he added.

As Sankaranarayanan submitted a complete schedule of such flights that can be provided on July 30, the bench adjourned the hearing.

The first plasma bank in Tamil Nadu was launched at the Rajiv Gandhi Government General Hospital (RGGGH) in Chennai on Wednesday, with AIADMK legislator N Sathan Prabhakar, who had recovered from Covid-19, becoming the first donor at the facility.

The plasma bank, which was established at a cost of Rs 2.34 crore, was inaugurated by Health Minister Dr C Vijayabaskar. The infrastructure supports plasma retrieval of 500 ml each from seven people simultaneously in 30 minutes.

“With the continuous support of Chief Minister K Palaniswami, we have established the first plasma bank. Those who recovered from Covid-19 are encouraged to donate plasma after 14 days,” said Vijayabaskar.

The first #PlasmaBank in TN @gmcrgggh was dedicated for the state today. TN HS, Dean, Directors & officials were present. Plasma retrieval will be done in 30 minutes, stored at 40° & used for Covid patients.Come forward & donate plasma.Together, let’s save lives. #Vijayabaskar pic.twitter.com/gCHSX75XFe

Tamil Nadu on Wednesday reported 5,849 fresh Covid-19 cases – the highest in a single day, taking its tally to 1,86,492. The total number of cases on Wednesday included 74 returnees from other countries and states.

With 522 deaths in the past 24 hours, including 444 deaths notified after report of Death Reconciliation Committee in Greater Chennai Corporation, the toll reached 3144.

“As per the ICMR guidelines that all death of COVID positive cases are declared as COVID death irrespective of underlying or antecedent cause of death, a committee of constituted to reconcile the COVID deaths by comparing death details from institutions and death details obtained from the burial ground,” the Tamil Nadu Health and Family Welfare Department’s daily bulletin read.

The Madras High Court on Wednesday made it clear that the Governor of Tamil Nadu cannot sit on the state's recommendation on release of all seven life convicts in the Rajiv Gandhi assassination case for so long and directed the Registry to inform counsel for the Governor's office to get instructions on the matter.

"No time limit is prescribed for such authorities to decide on such issues only because of the faith and trust attached to the constitutional post. If such authority fails to take a decision within a reasonable time, then the court will be constrained to interfere," a division bench, comprising Justices N Kirubakaran and V M Velumani said.

The bench made the observations while hearing a Habeas Corpus Petition moved by T Arputham, mother of life convict A G Perarivalan. She requested the court to grant 90 days parole to her son, who needs immediate medical attention in view of various ailments. She submitted that Perarivalan is vulnerable to COVID-19 infection in the prison as he suffers chronic illness.

Recording the submissions, the bench directed the prosecutor to get instructions from the state government on the parole request. It directed the registry to inform the counsel for the governors office to get appropriate instruction as to the disposal of the recommendation to release the life convicts. The court then adjourned the hearing to July 29.

Here are the cases and deaths in the top 10 districts in Tamil Nadu:

In districts like Ramanathapuram (52 deaths), Trichy (44 deaths), Theni (36 deaths) though there has been cases less than 3,000, more deaths have been reported.

Aggressive and focused testing has helped Chennai control the spread of Covid-19, the city’s corporation officials said. Positive cases are identified at an early stage, they say, with the help of door to door surveillance and fever camps. The corporation has introduced mobile testing centers in densely populated areas to identify potential cases and avoid unnecessary movement of asymptomatic patients.

READ | How is Chennai faring in its fight against Covid?