Check out here what activities are permitted under the new lockdown rules in Tamil Nadu, and what remains prohibited. 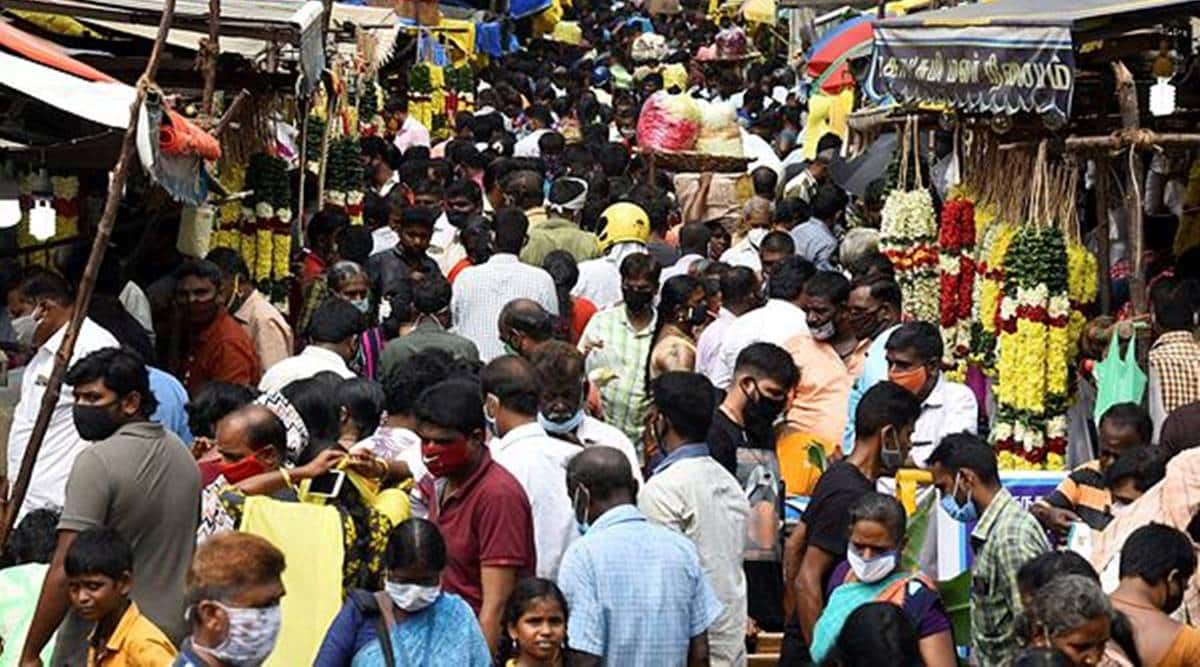 Amid an increase in Covid cases, people throng a flower market in Chennai. (File Photo: PTI)

The Tamil Nadu government Saturday announced more relaxations for the state, even as some of the lockdown restrictions remain in place.

Suburban train services also can be resumed, as per the regulations insisted by the Centre.

While movie theatres are allowed to reopen on November 10, shooting, including for small screens, is also allowed, with a crew strength of 150 members. However, presence of the public at shooting locations will not be allowed.

The new instructions were issued by Chief Minister Edappadi K Palaniswami after a meeting with district collectors and health experts on Wednesday. While Covid-19 cases in Tamil Nadu are on a decline, the CM has appealed to the public to avoid huge gatherings during the festive season.

Unlock 6.0 guidelines: Which states have allowed more relaxations in November

The state reported 31 deaths and 2,511 cases on Saturday. Chennai city alone had 690 cases and 12 deaths. Palaniswami said “due to the effective treatment provided by doctors in the state”, the infection rate haf fallen to less than 7.30 per cent and in the last seven days, less than 3,000 cases had been reported.

“The spread of the virus can be controlled only if people cooperate with regulations such as wearing masks, washing hands, maintaining physical distance and avoiding going out unnecessarily,” the CM said.

Religious congregations as well as other public functions, including academic and political events, are allowed from November 16 with a maximum of 100 people and as per standard protocols of social distancing. The number of people to attend marriage and funeral-related events is to be restricted to 100.

Also, those who are aged below 60 are allowed to visit gymnasiums from November 1. Permission has been granted for entertainment, amusement parks, auditoriums, assembly halls, zoos, museums to operate from November 10.

However, existing restrictions with regard to swimming pools, beaches and tourist places will continue and norms set for containment zones will also continue.

E-pass remains mandatory for people coming from other states to Tamil Nadu and for people travelling to the state’s popular tourist destinations, such as Ooty, Kodaikanal and Yercaud.

Following a request from the Puducherry government to resume bus services between the two states, the Tamil Nadu government on Saturday decided to permit regular bus services with the Union Territory without e-passes.