A health workers administers booster dose of Covid-19 vaccine to a senior citizen, in Chennai. (Twitter/@Chennaicorp)

The Tamil Nadu government has inaugurated 600 special camps to administer precautionary Covid-19 doses to people aged above 60 with co-morbidities on Thursday. The camps will be functional from 8 am to 5 pm and those who have received their second vaccine dose before April 20th 2021 are eligible for the dose. Walk-ins are allowed.

Meanwhile, the Directorate of Vigilance and Anti-Corruption (DVAC) has registered a disproportionate assets case against former Tamil Nadu higher education minister KP Anbalagan (63) and started raiding 57 premises linked to him in and around Dharmapuri, Chennai, Salem, and neighbouring states. He has been accused of acquiring assets worth Rs 11,32,95,755 in excess of his income from known sources.

The Madras High Court on Thursday directed the Tamil Nadu Additional Chief Secretary (Industries Department) to consider a plea seeking prior approval for proceeding against mining  officials in a complaint that alleged defrauding the government to the extent of Rs 500 crore through means like illegal mining.

Justice V Bharathidasan gave the direction while passing interim orders on a criminal original petition from Gnanarajan of Upparpatti village in Theni district praying for a direction to the Directorate of Vigilance and Corruption (DVAC) to register a case on his complaint dated July 15, 2021 and proceed further against the accused, which included former Deputy Chief Minister O Panneerselvam.

In his criminal original petition, the petitioner alleged that Paneerselvam and his associates had carried out illegal mining of gravel sand to the value of Rs 500 crore. "They had also converted the government land as their own property by changing the patta and creating the false documents by misusing and abusing their official power." In this connection, he had lodged a complaint with the DVAC. As there was no progress, he filed the present petition for a direction to the DVAC to register an FIR and proceed further. (PTI)

The Tamil Nadu government will prepare a detailed project report to implement the second phase of the Hogenakkal combined drinking water project for Dharmapuri and Krishnagiri districts at an estimated cost of Rs 4,600 crore, Chief Minister M K Stalin said on Thursday.

Announcing a slew of schemes for the district, the Chief Minister said the proposed project would further augment the drinking water supply to the people.

The Hogenakkal combined drinking water project was launched by former Chief Minister M Karunanidhi in 2008 when Stalin held the Local Administration portfolio. This water supply and fluorosis mitigation project caters to the requirement of 3 municipalities, 17 town panchayats and 7,639 rural habitations in the two districts. (PTI)

Puducherry: Indefinite strike from February 1 over privatisation of electricity sector

All the staff of the Electricity Department of the Puducherry government would launch an indefinite strike in the  Union Territory from February 1 to protest against the move to privatise the power sector.

A spokesperson of the Engineers and Employees Association of the Electricity Department on Thursday said in a press release: "With the territorial government adhering to its stand to open up the distribution wing of power supply, the power staff has decided to resort to indefinite strike on February 1."

Though talks were convened by the higher officials of the Department of Electricity with delegates of the association today, the staff said,"We are not convinced by the arguments of the government as it is very keen on privatisation." (PTI)

The Tamil Nadu government will take up excavations at seven archaeological sites including commencing the eighth phase of excavation at Keeladi from February, Chief Minister M K Stalin said on Thursday.

About Rs 5 crore has been allotted for the excavation which will be carried out till September.

Accordingly, digging will begin from the first week of February for the eighth phase of excavation at Keeladi archeological site (Konthagai, Agaram and Manalur) in Sivaganga district, third phase at Sivakalai in Thoothukudi district, second phase in Gangaikonda Cholapuram in Ariyalur and Mayiladumparai in Krishnagiri, first phase at Vembakkottai in Virudhunagar, Thulukkarpatti in Tirunelveli and Perumbalai in Dharmapuri district, a release from the government said. (PTI)

Suspecting his wife's fidelity, a man allegedly murdered her in their house, police said on Thursday.

The crime took place in Tirupur, 55 kms from here, and the man, a tempo driver by profession, was arrested, the police said. He suspected that his wife was in a relationship with a youth while the couple was in Tenkasi before settling down in Tirupur five months ago, the police said.

Even after coming to Tirupur, the driver continued to doubt his wife and would often pick up quarrel with her, they said. During one such quarrel on Wednesday night, he slit the throat of the woman, they added. (PTI)

A 55-year-old sub-inspector of the Flower Bazaar police station was suspended after his reply to a Facebook post taking a shot at the DMK government went viral. The police department accused him of spreading fake news on social media.

The officer, identified as G Sekar, through a profile named Sekar Sekar, had allegedly passed a comment taking a dig at the government for not providing the promised incentive to the police.

Chief Minister M K Stalin had announced that the government would provide cash assistance of Rs 5,000 to personnel across the state in view of the service they provided during the Covid-19 pandemic. Read more

Senior BJP leader H Raja on Thursday alleged corruption to the tune of Rs.1,000 crore in the purchase of Pongal gift hampers for distribution among the ration cardholders in Tamil Nadu this month.

Considering the standard of the articles distributed as against the claim of a Rs.1,800-crore purchase by the government, there was a corruption of Rs.1,000 crore, Raja told reporters here.

The ruling party DMK, which demanded Rs.5,000 for distribution among the people as against Rs.2,500 given by the previous AIADMK regime as a Pongal gift, had given only sub-standard articles now, said Raja who was here to participate in a temple festival. (PTI)

Vigilance raids were conducted on Thursday in different parts of Tamil Nadu at the premises of AIADMK leader and former Minister K P Anbalagan in connection with a disproportionate assets case. Anbalagan was the Higher Education Minister in the previous AIADMK government in the state.

The Directorate of Vigilance and Anti-Corruption (DVAC), Dharmapuri, registered a disproportionate assets case against the Minister and four of his close family members, even as sleuths simultaneously raided 57 premises linked to him in Dharmapuri, Salem and Chennai districts.

Anbalagan is the sixth former AIADMK Minister to come under the scanner of the DVAC. (PTI)

A group of Indian fishermen were allegedly attacked by Sri Lankan Navy personnel when they were fishing near the island nation's waters and a boat was sunk following a collision, a senior Fisheries department official said here.  As many as seven fishermen who were in the boat fell into the water following the collision with the Lankan Navy vessel near Katchatheevu, the official said.

The Lankan Navy personnel also cut the nets of the Indian fishermen and chased them away, the Fisheries department official said and alleged that they (Lankan Navy men) did not even bother to try and rescue the fishers who fell into the water.

"Apart from sinking the boat, the Lankan navy did not evince any interest to check the plight of the fishermen on board. They not only cut our fishing nets but also chased us away," a fisherman, belonging to the All Mechanised Fishermen Association, said. (PTI)

The union territory of Puducherry recorded 2,783 fresh Covid-19 infections during the last 24 hours as the overall tally went up to 1,45,342 and the active cases broke the 13,000 mark, a senior Health Department official said on Thursday.

The test positivity rate (the number of cases per 100 tests) shot up to 43.19 per cent in the last 24 hours ending 10 AM on Thursday as against 30.23 per cent recorded on Wednesday. A 95-year old woman succumbed to the virus pushing the death toll in the union territory to 1,897, Director of Health and Family Welfare Services G Sriramulu said in a release.

Among the new cases, the Puducherry region alone accounted for 2230 while Karaikal recorded 462 new cases followed by Yanam (68) and Mahe (23). The number of active cases climbed to 13,053 as against 11,217 on Wednesday. While 144 patients are undergoing treatment in hospitals, the remaining 12,909 are in home isolation. While the test positivity stood at 43.19 per cent, the fatality and recovery rates were 1.31 per cent and 89.71 per cent respectively. (PTI)

Chennai-based medical device firm Kriya Medical Technologies on Thursday said it has received Indian Council of Medical Research approval for Krivida Novus Covid-19 testing kit -- developed in collaboration with ImmuGenix Bioscience -- that can also detect the Omicron variant. The kit detects the SARS-CoV-2 virus and also differentiates the Omicron variant from Delta and other variants. The test takes about 45 minutes to detect the infection and determine the variant, the company said in a statement.

"KRIVIDA Novus is a one of its kind test that not only differentiates the variants but also detects the sub-lineages of Omicron. The kit is compatible with Real-Time PCR machines with a test run time of roughly 45 minutes," Kriya Medical Technologies CEO and Founder Anu Moturi said. (PTI)

Two men, both aged 35, died due to asphyxiation while cleaning a septic tank at a house in Chennai’s Varadharajapuram near Tambaram Wednesday, the police said. Their bodies were handed over to their families after a post-mortem and a case was lodged at the Manimangalam police station. Read more

As of 10 am on Thursday, as many as 2,038 Covid-19 booster doses have been administered at special camps to those who are above 60 years with co-morbidities. 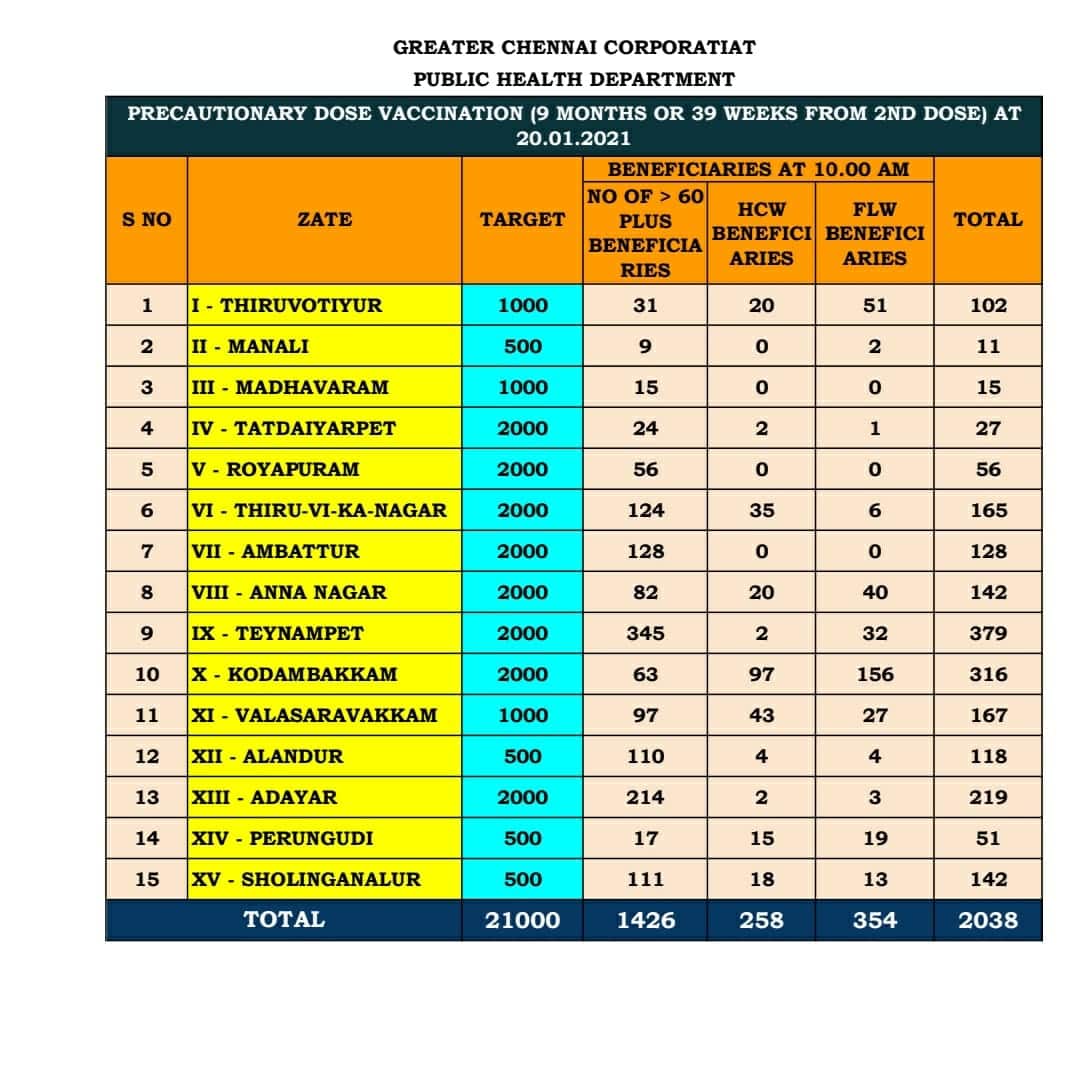 Tamil Nadu | A case has been registered under 'Prevention of Cruelty to Animals Act' against a person for attacking bulls with a stick in Palamedu Jallikattu. Following this, Madurai Police conducted an investigation & arrested him: V. Baskaran, Madurai SP

The Directorate of Vigilance and Anti-Corruption (DVAC) has registered a disproportionate assets case against former Tamil Nadu higher education minister KP Anbalagan (63) and started raiding 57 premises linked to him in and around Dharmapuri, Chennai, Salem, and neighbouring states. He has been accused of acquiring assets worth Rs 11,32,95,755 in excess of his income from known sources. Read more

Tamil Nadu Chief Minister M K Stalin on Wednesday urged the Centre to avert a crisis gripping the power looms, apparel and home textile units in Tamil Nadu owing to the 11 per cent import duty on cotton and asked the government to control the rising price of cotton and yarn and save the industry. These units may soon become unviable resulting in closure and consequent large-scale unemployment and industrial unrest in the State, he said. Read more

I have written to Hon'ble Minister @PiyushGoyal, reiterating the demands in my earlier letter where I had informed him about the state of textile industries in Tamil Nadu and have asked him to take measures to control the price of raw materials used by textile industries. pic.twitter.com/f4XNrH6gVN

Above 60 years old? Here's a list of Chennai centres you can walk in between 8 am - 5 pm

The Tamil Nadu government has inaugurated a special camp to administer precautionary doses to those people aged above 60 with co-morbidities today. The camp will begin at 8 am and will be open till 5 pm and is said to take place on Thursdays. Over 600 special camps have been put in place and walk-ins are allowed.

Here is the link to a list of centres that are administering the Covid-19 booster dose today: http://covid19.chennaicorporation.gov.in/covid/gcc_booster_camp/ Kanyakumari: Waves break on the rocks in the backdrop of Kanyakumari Amman Temple in the tri-sea area of Kanyakumari, Wednesday, Jan 19, 2022. (PTI Photo)