The recovery of the idol is one of the 60-odd cases of stolen relics that the Tamil Police's Idol Wing has cracked in the last 10 months, with the police now awaiting the return of the idols to India from the United States, United Kingdom and Australia, among other countries. 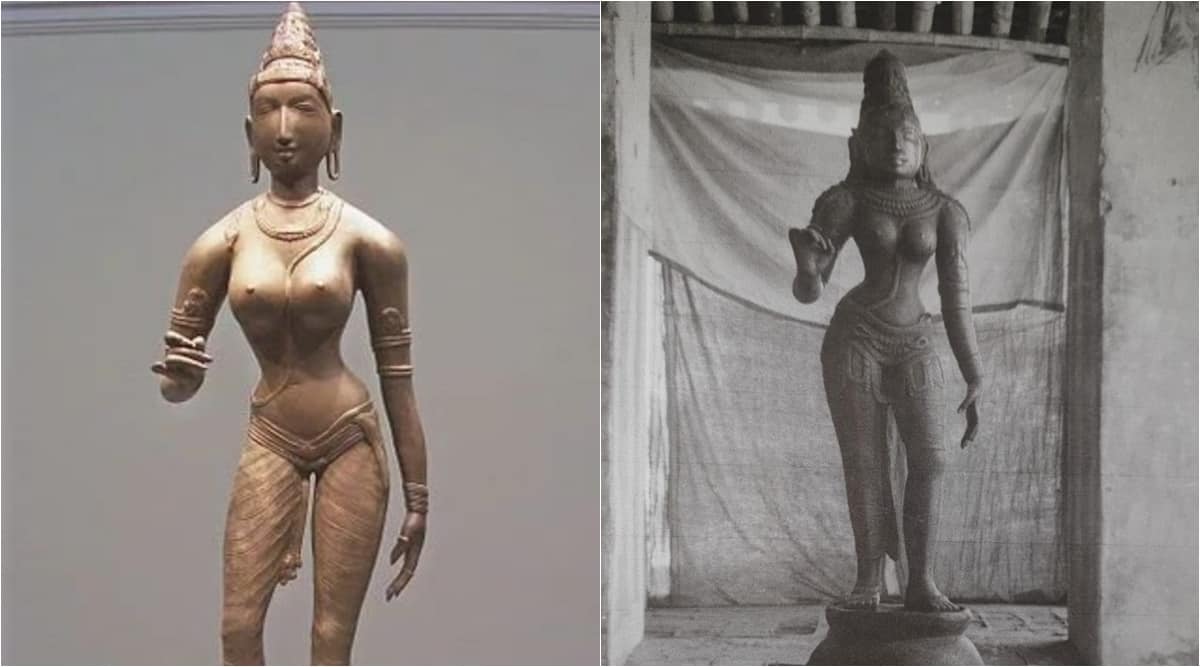 Over five decades later, as police set out to solve the case, there were few clues -- no photographs of the stolen idol and little evidence of its present status.

THE TRAIL had gone cold even before it began.

At her office in Kumbakonam, Inspector R Indira had a case on her hands: five idols, including a 7th Century statue of Goddess Parvati, had been stolen from the Nadanpureeswarar temple near Kumbakonam in Tamil Nadu’s Thanjavur district, with an FIR registered on May 12, 1971.

Copy of the first Tamil translation of the Bible

Over five decades later, as police set out to solve the case, there were few clues — no photographs of the stolen idol and little evidence of its present status. Last month, after weeks of sleuthing, the team finally tracked down the Parvati idol to an auction house in the US.

The recovery of the idol is one of the 60-odd cases of stolen relics that the Tamil Police’s Idol Wing has cracked in the last 10 months, with the police now awaiting the return of the idols to India from the United States, United Kingdom and Australia, among other countries.

Subscriber Only Stories
View All
UPSC Key- January 30, 2023: Know about Project 39A, Beating Retreat Cerem...
UPSC Essentials | Key terms of the past week with MCQs
ExplainSpeaking: How to evaluate a Union Budget
Mahesh Vyas writes: Why the job shortage is for real
Apply New Year promo code SD25
Read also |How successful were the Cholas as empire builders

Buoyed by its early success, the Idol Wing is now on a drive to recover as many antique idols as possible from museums and auction houses abroad. Most of the stolen idols are from Central Tamil Nadu, a region with some of the most sophisticated temple architecture of medieval India from the Chola period and whose temples are known to have recorded robberies, both before and after Independence.

The police’s probe into the Nadanpureeswarar temple theft started in July 2022.

Speaking to The Indian Express, Director General of the Idol Wing, K Jayanth Murali, says that when they started investigating the theft, it seemed a tall order since the case was of 1971 and there were no photographs of the idols.

“The temple was burglarised, and the theft took place in 1971. Although we had no Idol Wing then, a complaint was filed. The matter was revived in 2019 when K Vasu, a trustee of the temple, contacted us, but we couldn’t do much because the temple lacked any documentation,” Murali said.

Inspector Indira, who took over the case earlier this year, began the search for the missing idols all over again, starting with scouring libraries and archives for any trace of the stolen relics. “Identifying idols is a challenge since every small lead has to be taken to experts for validation. Also, in many cases, smugglers would have replaced the original statues with replicas,” she said.

Indira’s search finally led her to the French Institute of Puducherry, which had black-and-white photographs, taken from the temple in 1957, of Parvati and the other missing idols. Inspector Indira and her team of 10 then launched off on a cyber probe. “They searched websites and catalogues of museums, auction houses and online pages of major collectors as well as European idol smugglers,” said Murali.

The team finally traced the Parvati idol to one of the digital catalogues of Bonhams, a leading auctioneer of fine art and collectables, motor cars and jewellery in the US. The image from the gallery was sent to specialists at the Archeological Survey of India (ASI), who used photogrammetry (a technique that involves recording, measuring, and interpreting images to arrive at information about physical objects and their surroundings) to confirm that the image on the Bonhams website was of the same Parvati idol that had been stolen.

But the discovery of a long-lost idol is only a job half done. The procedure to claim relics from another country is a long-drawn process that involves several bureaucratic procedures.

A month after the investigation into the stolen idols began, the Idol Wing decided to claim them from the US. As part of the claim, witness statements have been gathered from the temple and a Mutual Legal Agreement Treaty (MLAT) has been drafted.

DGP Murali says that over the last 10 months, the Idol Wing has prepared 60 MLATs — a success considering that in the last 10 years, only 22 idols were recovered. Of the 60 cases, 37 idols are to be claimed from the US, 16 from Singapore, six from Australia, and four from the UK.

Last year, 10 idols were recovered from foreign countries, of which eight have been returned to temples and two are awaiting legal procedures — the process of returning idols to temples is carried out by courts.

One of the 60 stolen idols that have been found in international antique markets is one of the Chola queen Sembiyan Mahadevi, the mother of 10th century ruler Raja Raja Cholan. The case was reopened on the basis of a complaint made in 2017. The idol of the queen, worshipped as a Goddess, was stolen from a small village temple in Nagapattinam district over a century ago.

A rare copy of the first Tamil translation of the Bible, stolen from the renowned Saraswathi Mahal Library in Thanjavur, is another relic that will soon be returned to the country.

Inspector Indira, who has helmed many of these cases, including that of the Bible copy and the Sembiyan Mahadevi idol, says that as part of their probe, the team examines ” countless number” of online pages — of museums, auction houses, collectors, and even of smugglers.

“When we began our investigation into the missing Tamil Bible, the only information we had was that it had disappeared after five foreigners visited the Thanjavur library. We recognised them as members of a group that had visited the neighbouring village of Tharangambadi as devotees of Bartholomäus Ziegenbalg (a Lutheran clergyman and the first Pietist missionary to India who died in 1719). Later, at the priest’s family museum in Germany, we discovered a picture of the Bible. Though it was difficult to identify the perpetrators of the theft in 2006, we were able to locate the copy of the Bible that bore the signature of Maharaja Sarboji (Rajah of Thanjavur in 1798),” she said.