Chennai Cyclone Weather Highlights: Cyclone Mandous weakened into a deep depression in the early hours of Saturday, and lay centred 55 km north-northwest of Mahabalipuram and about 40 km west-southwest of Chennai. Chennai: A man walks through a waterlogged area after the landfall of Cyclone Mandous, at Marina beach in Chennai, Saturday, Dec. 10, 2022. (PTI Photo/R Senthilkumar)

Weather in Chennai Highlights (December 10): Cyclonic storm Mandous, which crossed the coast at Mamallapuram near here, has weakened into a deep depression but the weather system impacted the city and its neighbourhoods, uprooting a number of trees. Around 400 trees fell in the city under the impact of 70 kmph wind speed when the weather system crossed the coast in the intervening night of December 9 and 10, Tamil Nadu Chief Minister M K Stalin said. Four persons were killed, he said without elaborating, news agency PTI reported. Civic agencies, including the Greater Chennai Corporation here, were involved in removing the fallen trees.

The cyclone weakened into a deep depression in the early hours of Saturday, and lay centred 55 km north-northwest of Mahabalipuram and about 40 km west-southwest of Chennai. It will further weaken into a depression by this afternoon. Light to moderate rainfall is predicted in most places, with heavy to very heavy rainfall at isolated places across north interior Tamil Nadu.

A holiday has been declared on Saturday for schools and colleges in Chennai, and other districts including Vellore, Villupuram, Cuddalore, Ranipet, Tiruvallur, Chengalpattu, and Kancheepuram due to rain forecast. As many as 16,000 police personnel and 1,500 Home guards have been deployed in the state for security, relief and rescue tasks, and a 40-member team of the Tamil Nadu State Disaster Response Force, in addition to 12 District Disaster Response Force teams, are on standby, the police said. Nearly 400 personnel of the NDRF and State Disaster Response Force teams have been stationed in coastal regions, including near the Cauvery delta area.

Relatively a lesser degree of damage, including those to houses marked the landfall of cyclonic storm Mandous in Tamil Nadu and at least four people were killed in rain-related incidents, authorities said here on Saturday.

'There is no damage on a large scale,' Chief Minister M K Stalin said after visiting affected fishing neighbourhoods here and distributing relief assistance to them. Tamil Nadu and particularly Chennai has 'come out of the impact of Mandous,' he said.

Stalin, answering a question, told reporters that estimation of loss was being done and if required Central assistance would be sought. Four persons were killed, he said, apparently referring to rain-related incidents. As many as 181 houses --hutments-- were damaged and information on other kinds of damage was being compiled. In 201 relief camps, 9,130 people belonging to 3,163 families are being sheltered. (PTI)

Roads got submerged and traffic was disrupted, as rivers overflowed in several areas of the KVB Puram Mandal on Saturday due to heavy rainfall in the region following Cyclone Mandous. The areas that faced such overflow of rivers included Kovanur, Thimmasamudram, and Rajula Kandiga.

Earlier today, the KVB Puram Mandal in Andhra Pradesh's Tirupati district recorded the highest rainfall at 258mm due to Tropical Cyclone Mandous currently active in the Bay of Bengal region, said official sources. As per sources, the way from KVB Puram Mandal, under the Satyavedu constituency, towards the Srikalahasti is completely blocked due to heavy water flow from nearby ponds and lakes.

Along with Andhra Pradesh, Chennai and several other parts of Tamil Nadu, have witnessed heavy rain and strong winds as cyclonic storm Mandous crossed the states on Saturday after landfall, as per the India Meteorological Department (IMD). (PTI)

Cyclone Mandous on Saturday caused waterlogging at the Marina beach in Chennai and damaged the food stalls.

A recently built wooden ramp for the disabled at Chennai’s Marina beach was damaged by intense waves on account of cyclone Mandous Friday morning.

The 263-metre-long, 3-metre-wide ramp was constructed with a mix of several categories of wood, including Brazilian wood, at a cost of Rs 1.14 crore, according to officials. It was inaugurated by Chepauk MLA and Chief Minister MK Stalin’s son, Udhayanidhi Stalin. (Read more)

"Generally cloudy sky. Light to moderate rain is very likely. Surface winds are likely to be strong at times. Mist is very likely during early morning hours in some areas. Maximum and minimum temperatures very likely to be around 24 and 19 Degrees Celsius respectively," India Meteorological Department (IMD) forecast for the next 48 hours, issued earlier on Saturday said.

Visuals from #Parandur.. Residents claim that due to incessant rainfall agricultural land is submerged and they fear the water might enter their houses. They say the situation might turn worse if the TN govt goes ahead with it's plan to construct the proposed Greenfield airport. pic.twitter.com/W26lZxMqUp

Six months on, govt reverses sand, gravel rates to Rs 5.5/cubic feet
‘Today it was Vikas, tomorrow it could be any of us’: Parking...
Applications to regularise unauthorised constructions to be accepted offline
Fire at Ahmedabad high-rise causes panic among residents, 45 evacuated
‘Large-scale rigging’ in law entrance exams at Delhi University, claims P...
More from Cities >>
Watch: A special interview about weather and storms by expert S Balachandran

The Greater Chennai Corporation (GCC) on Saturday initiated relief and maintenance work after the havoc casued by Cyclone Mandous in the city. The municipal body is taking all measures to clear the uprooted trees and fallen tree branches.

"Power to street lights are cut and will be resumed after clearing the trees. Mosquito fogging activities are also done. Please contact us at 1913 for any help," GCC said in a tweet.

#GCC is taking all measures to clear the uprooted trees and fallen tree branches. Power to street lights are cut and will be resumed after clearing the trees. Mosquito fogging activities are also done. Please contact us at 1913 for any help.#ChennaiCorporation#HeretoServe pic.twitter.com/DKN45EvlM9

Stalin, who reviewed the situation at Kasimedu area, told reporters that the government anticipated the situation and put in all preventive measures and could therefore prevent major damage.

"With advanced planning, this government proved any disaster can be managed," he said. (PTI) Cyclone Mandous approaching: Here is all you need to know

Tamil Nadu and neighbouring areas are bracing for heavy rainfall with cyclone Mandous expected to cross India’s coast between Puducherry and Sriharikota on the night of December 9, the India Meteorological Department (IMD) said Thursday.

In its bulletin issued on Thursday, the IMD said the cyclone “is expected to move west-northwest and cross north Tamil Nadu, Puducherry and adjoining South Andhra Pradesh coast between Puducherry and Sriharikota with a wind speed of 70 km per hour around midnight of December 9.” Read more

According to the city police, nearly 100 trees fell in different parts of the metro and 52 have been removed in coordination with its personnel. Power poles fell down in five locations and three had been cleared.

Cyclone Mandous, which emerged from the Bay of Bengal, made landfall in Mamallapuram, 30 km from Chennai, on Friday night, resulting in heavy rainfall and squally winds in parts of coastal Tamil Nadu. The cyclone crossed the coast between Puducherry and Sriharikota at around 1.30 am, before weakening into a deep depression. The India Meteorological Department (IMD) has predicted light to moderate rainfall across the state today, and heavy to very heavy rainfall at isolated places across north interior Tamil Nadu. Here are the top developments so far 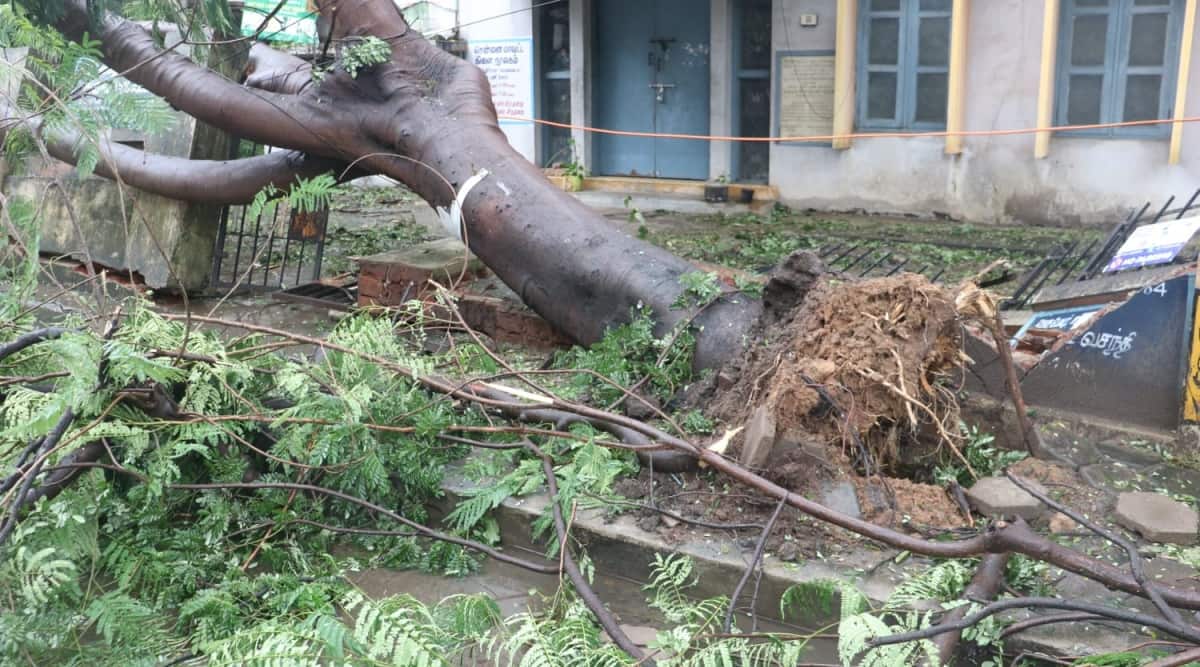 Vehicular traffic, which has been suspended on the Kamarajar Salai off Marina beach, has been resumed, the Greater Chennai Police said. Subways did not suffer waterlogging.

Due to heavy rains caused by Cyclone Mandous, the Arignar Anna Zoological Park, Vandalur will remain closed to visitors on Saturday.

Tamil Nadu Revenue and Disaster Management Minister K K S S R Ramachandran on Saturday said there was no major damage caused by heavy rains due to Cyclone Mandous. Over 9,000 persons have been lodged in 205 relief centers, he said.

Cyclone Mandous: What is a cyclone?

According to the World Meteorological Organization, “Tropical cyclones are one of the biggest threats to life and property even in the formative stages of their development. They include a number of different hazards that can individually cause significant impacts on life and property, such as storm surge, flooding, extreme winds, tornadoes and lighting. Combined, these hazards interact with one another and substantially increase the potential for loss of life and material damage.”

How are cyclones named?

Cyclones that form in every ocean basin across the world are named by the regional specialised meteorological centres (RSMCs) and Tropical Cyclone Warning Centres (TCWCs). There are six RSMCs in the world, including the India Meteorological Department (IMD), and five TCWCs.

As an RSMC, the IMD names the cyclones developing over the north Indian Ocean, including the Bay of Bengal and Arabian Sea, after following a standard procedure. The IMD is also mandated to issue advisories to 12 other countries in the region on the development of cyclones and storms.