Catch the latest news in Tamil Nadu and Chennai as we bring you live updates on Chennai water crisis, traffic, Tamil Nadu politics, Tamil movie releases, Chennai weather forecasts, local and civic issues and events near you in Chennai.

Chennai, Tamil Nadu News June 25 Highlights: The Madurai Corporation installed GPS sensors in all the corporation lorries and tractors on Monday to prevent the illegal sale of water by the drivers. Further, the sensors will enable authorities to track the route taken by the drivers and gauge information on the quantity of water that is being supplied.

The Teachers Eligibility Test (TET) which was marred by technical glitches as it went online for the first time on Sunday has been rescheduled. The Teachers Recruitment Board (TRB) announced on Monday that the re-exam for those who failed to complete the exam will be held on June 27.

The test was conducted to select 814 Computer Instructors for government schools. However, technical and logistical errors on June 23 left few candidates unable to complete the exam, while a majority of them could not attempt the test. The re-exam will be held at three engineering colleges in Namakkal, Kumbakonam and Trichy, Tamil Nadu.

Couple hacked with machete at Mettupalyam

A couple was hacked repeatedly with a machete by unknown people at Mettupalyam in Kovai district, Tamil Nadu today. 21-year-old Kanakaraj died on the spot, while the girl, Varshini, aged 18, was critically injured and is fighting for life at a hospital where she was admitted earlier today.

The Southern Railway announced today that there would be a change in the pattern of suburban train services due to track maintenance work being carried along the Chennai - Arakonam section at Kadambattur Yard on the Up and Down lines on June 25 and June 26. As per the revised schedule, trains plying along the Down fast line between Tiruvallur to Thiruvalangadu will skip stopping at the Senji Panambakkam station until the maintenance work is over.

Originally, services were cancelled from June 18 to June 25 and were supposed to resume from tomorrow, but an announcement from the Southern Railway today declared that the services will resume from Friday.

CHANGES IN THE PATTERN OF SUBURBAN TRAIN SERVICES @DrmChennai pic.twitter.com/5ODbb2CCMF

Even as Tamil Nadu and its capital Chennai, in particular, are reeling under water scarcity, tankers with Rajinikanth’s picture are zigzagging across the city and supplying water in worst-affected regions. The initiative, by members of Rajini Makkal Mandram (RMM), the fan club of superstar Rajinikanth now made into a broad political platform, is to provide drinking water free of cost to a city thirsting for a solution to the months-long crisis.

The RMM workers have also lent a helping hand in the resurrection of Chitlapakkam lake. The agri division of RMM joined the volunteers of ‘Chitlapakkam Rising group’ and were involved in the cleaning drive on Sunday.

The Tamil Nadu Weatherman took to Twitter today and announced that there were chances of rainfall in Chennai and Puducherry and the districts of Vellore, Tiruvannamalai, Villupurum and Cuddalore in tamil Nadu tonight due to the depression in the Bay of Bengal.

Another night show awaits Chennai - Maybe the 1st day of widespread rains in the KTC belt and even many northern districts such as Vellore, Tiruvannamalai, Villupuram, Pondy and Cuddalore will have chance of rains.https://t.co/1aUjGGX79Z pic.twitter.com/Vr7W5clBEt

The Indo Cine Appreciation Foundation, in association with the Delegation of the European Union to India, Alliance Française of Madras and Goethe-Institut/Max Mueller Bhavan will host Day 2 of the 24th European Union Film Festival (EUFF) today from 6 pm to 08:15 pm at the Alliance Française of Madras institute on College Road, Chennai. The EUFF will be held from June 24 to July 4 in the city.

Election Commission of India has announced Biennial Election to six Rajya Sabha seats from Tamil Nadu. Five seats fell vacant by the retirement of MPS and 1 fell vacant as DMK MP Kanimozhi got elected to LS. The polling is scheduled to take place on July 18. The list of states that have the best sanitation and hygiene, which was released today saw Tamil Nadu falling from its previously held rank of number 3 and trailing at rank number 9 this year.

Kerala bagged the first rank this year, followed by Andhra Pradesh at number 2 and Maharashtra at number 3.

The Madurai bench of the Madras High Court granted Kollywood director Pa Ranjith anticipatory bail today, following a hearing of the plea petition that was filed by the director.

The Tamil Nadu Government had filed a case against Ranjith for his controversial remarks against Raja Raja Chola at en event in Chennai. After deferring the hearing for Ranjith's plea last week, the Madurai bench of the Madras HC granted anticipatory bail today and warned the director against making such remarks in the future.

Officials from the Customs Department seized Rs. 99.5 lakh worth of foreign currency from a passenger at the Chennai International Airport today. The passenger, who had arrived from Colombo was arrested and later sent out on bail.

On Sunday, customs officers from the Chennai International Airport detained a trader from Kolkata for carrying a pistol containing ten bullets in his hand luggage. The man claimed that he had purchased the pistol for his personal safety and had forgotten that he had packed the firearm in his bag.

Justice N Anand Venkatesh of the Madras High Court has initiated contempt proceedings against two persons including educationist and film producer Ishari K Ganesh, for having attempted to influence the judge through a mutual friend in relation to Nadigar Sangam elections.

The Indian Institute of Technology, Madras (IIT-M) released a statement on Monday, where it called for developing mobile payment applications, customer services and redressal cells  in multiple languages to promote inclusiveness and extend the reach of digital payments in India.

The Mobile Payment Forum of India submitted their recommendations to Nandan Nilekani on Monday to develop applications in multiple languages in the country.

Man protests outside TASMAC over wife's death on Monday

Shobana met with an accident on Monday after three drunk men riding a motorcycle rammed into her scooter. While Shobana died on the spot, her daughter sustained multiple injuries and was admitted to a hospital.

Man stages protest against Tamil Nadu State Management Corporation (TASMAC) blaming state-run liquor shops for death of his wife. She died after 3 drunken men rammed into her two-wheeler. Other residents too joined the protest demanding closure of TASMAC@madhavpramod1 pic.twitter.com/6pOHit7AgG

The Cauvery Water Management Authority (CWMA) directed Karnataka today to release Tamil Nadu's share of Cauvery water that was reserved for the months of June and July to the state immediately at the CMWA meeting today.

The CWMA had earlier directed Karnataka in May to release 9.19 thousand million cubic feet (tmc) of water to drought-hit Tamil Nadu for the month of June. However, the state only received 1.72 tmc of water.

Madras HC allows plea by Rajiv Gandhi assassination convict S Nalini to appear in person to argue for parole. She will be produced at the High Court on July 5th.  Nalini had earlier moved a petition seeking six months parole for her daughter's wedding & she also wanted to argue her petition in person before the Madras High court. Amma Makkal Munnetra Kazhagam (AMMK) secretary TTV Dinkaran has slammed Thanga Tamilselvan, the AMMK propaganda secretary for his remarks about the party and its leadership. Speaking to the reporters at his residence today, TTV Dinakaran, said: "Today's meeting with secretaries was not an emergency meeting, it was pre-planned. Tamilsevan is not worth to talk about. I told him beforehand that his activities are not aligning with the party principles and he would be stripped off his post. Let him decide whatever he wants (if he wants to join AIADMK), we are not scared of him." 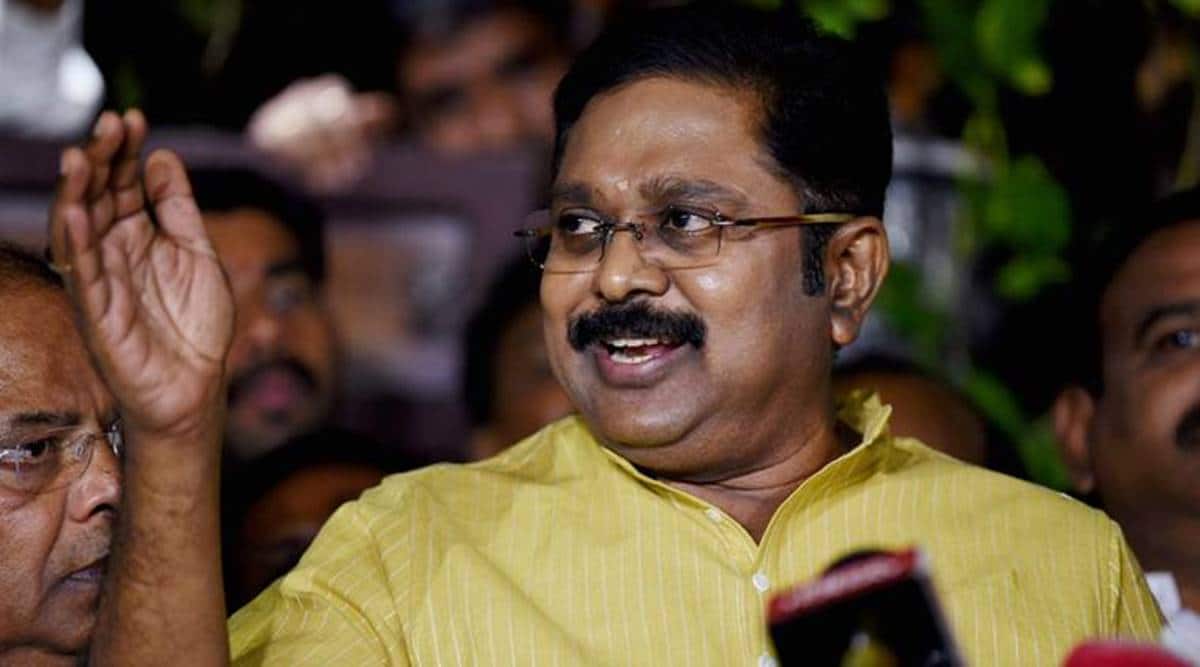 Diwali tickets sold out within hours, rush to increase over the next few days

Train tickets to southern towns for Diwali were sold out within two hours after the Indian Railway Catering and Tourism Corporation (IRCTC) opened reservations on Monday. Only 59 berths were available on the Podhigai Express, 65 on Nellai Express, 100 on Pearl City and 78 on the Thiruvananthapuram Mail at the end of the day.

The IRCTC announced that with Diwali falling on October 27 this year, tickets for October 25 can be booked today and for October 26 on June 26 on the IRCTC website. The website will also display the probability of confirmation of waitlisted and Reservation Against Cancellation (RAC) tickets ahead of the booking.

The Greater Chennai Corporation (GCC) announced on Monday that the GCC and the Public Works Department (PWD) will be conducting a joint inspection on Tuesday to complete work on the proposed nature trails along the Couum six months from now. Work on the trails were initiated a few months ago after encroachments and a place of worship along the Cooum were demolished to make way for a 1.5 km long trail in Nungambakkam. The project was delayed due to the slow pace of the formation and compaction of the bund by the PWD.

The nature trail in Nungambakkam, once it is completed,  is expected to offer connectivity to residents from College Road to Chetpet and is a part of the GCC's project for ecorestoration of the river. Currently, 8 km of the nature trails have been completed.

Chain snatching on the rise in city; 10 cases reported over past few days

Chain snatching has been on the rise in the city after ten isolated incidents were reported over the past few days in Chennai. Five cases were reported in Chennai alone on Sunday and Monday. Two  bike-borne men snatched the chain of a woman in Royapettah on Sunday morning near the Indian Bank administrative office. Elsewhere in the city, a woman and her dog were injured when they fell off their bike after two bike-borne men snatched the woman's chain on Sunday morning.

After Chennai received moderate rainfall over the weekend, which brought some respite to the city which had been under the grip of a heatwave for two weeks, the Regional Meteorological Centre (RMC) predicted rainfall in the city for the next two days.

Weather forecasters said that parts of Chennai would receive patchy rainfall due to the build up of heat and moisture. Light to moderate rainfall has been predicted at Chennai and its neighbouring districts for the next two days, following which dry weather will continue to lay seige on Tamil Nadu. The RMC said that rainfall would halt once the monsoon in Kerala comes to an end in the next two days.

The Southern Railway announced on June 18 that there would be a change in the pattern of suburban train services due to track maintenance work being carried along the Chennai - Arakonam section at Kadambattur Yard on the Up and Down lines from June 18 to June 25. As per the revised schedule, trains plying along the Down fast line between Tiruvallur to Thiruvalangadu will skip stopping at the Senji Panambakkam station until the maintenance work is over.

A video screen grab of the incident which took place on June 13.

Chennai, Tamil Nadu News Live Updates: Four youth, who were arrested for assaulting a Chennai cop, were booked under the Goondas Act on Sunday, police said.

Out of the four Indian sailing teams set to take part in next month’s J80 World Championship at Bilbao in Spain, three will be from Chennai’s Royal Madras Yacht Club (RMYC).

Read The club, established in 1910, is aiming for a strong finish after one of its teams was placed fifth at last year’s Asian Championship in China.

RMYC’s hopes rest on a professional team, a mixed team, and an all-women’s team. The members belonging to these teams range from pilots, school and college students, doctors etc.