Catch the latest news in Tamil Nadu and Chennai as we bring you live updates on Chennai traffic, Tamil Nadu politics, Tamil movie releases, Chennai weather forecasts, local and civic issues and events near you in Chennai.

The Tamil Nadu Hostel Owners’ Welfare Association said that at least 15 among the 200-odd ladies hostels which are affiliated to them have stopped operations in Chennai. Meanwhile, several mansions in Triplicane in Chennai have also shut shop due to the ongoing water crisis.

DMK to hold protests in districts from June 22

Dravida Munnetra Kazhagam (DMK) president, M K Stalin announced today that from June 22, the DMK will hold protests in all districts of Tamil Nadu to bring attention to the state-wide water crisis. Stalin directed all the district secretaries of DMK to stage protests in this regard from June 22.

Traffic from Loyola College to College Road Junction via Sterling Road has hit a snag. Traffic men are expected to clear it soon.

A press release from the production company that is producing actor Vijay's upcoming Kollywood flick announced today that the name and the first look of the film will be revealed at 6 pm on June 21. The film, which has tentatively been titled, Thalapathy 63, is being helmed by Atlee and features soundtrack by A R Rahman.

Sanjay Dutt, AICC Secretary for Tamil Nadu and Puducherry to hold two-week visit to the states

Sanjay Dutt, the All India Congress Committee (AICC) Secretary for Tamil Nadu commenced his two-week long tour of Tamil Nadu and Puducherry on June 18 and heralded Rahul Gandhi's birthday with an eye donation and blood donation camp being organised in his honour at Thoothudi district in Tamil Nadu.

The tour, which will be held from June 18 to June 30 is being undertaken by Sanjay in response to the Congress' Lok Sabha mandate and hopes to strengthen the Congress' position in the State. Sanjay will be visiting Chennai, Tenkasi, Dindigul, Puducherry, Nagercoil and Kanyakumari.

Hearing for case against Group 1 of TNPSC postponed to tomorrow

The Madras High Court announced today that the hearing for the case requesting cancellation of Group 1 of the Tamil Nadu Public Service Commission (TNPSC) has been postponed to tomorrow. The case was filed against TNPSC after it failed to release the answer key of the exam as per schedule, even after the Madras HC had directed TNPSC to do so.

Registration for Round 1 of counselling under the all-India quota at government colleges, deemed universities and central government institutions have begun today. The registrations will be open on the website of the Directorate General of Health Services from June 19 to June 24.

Members of Parliament (MP) from Tamil Nadu, who were elected to the Lok Sabha visited the Vice President of India, Venkaiah Naidu at his official residence today after the All Party Meet in New Delhi.  Taking to Twitter, Naidu tweeted that V Kalanidhi, the MP from North Chennai and Dayanidhi Maran, the MP from Chennai Central had called on him today at New Delhi.

While most hotels, hostels and mansions in the city have shut down operations in light of the city-wide drought, swimming pools in Chennai continue to function with the help of water tankers. The pools, which are owned by public and private parties  assert that there is no crisis, despite the fact that their borewells have gone dry and the authorities are having to rely on private tankers for replenishment.

However, most citizens want the government to shut down all private pools until the crisis tides over.

The Madurai bench of the Madras High Court announced today that it had postponed the hearing for Director Pa Ranjith's anticipatory plea to the day after tomorrow. Pa Ranjith had sought anticpatory bail from the bench last week after a case was filed against him for his remarks against Raja Raja Chola and his reign which was made by the director at an event in Kumbakonam in Tamil Nadu.

The Madurai bench of the Madras HC also gave a stay order against the arrest of Ranjith until the hearing.

Residents of Royapettah given tokens to avail water supply

While the Tamil Nadu Government denied that there is a water crisis in Chennai and promised uninterrupted water supply till November, residents in Royapettah, Chennai have been issued tokens to avail water being supplied by tankers.

The Southern Railway announced today that seven of its hospitals have been empanelled in the Ayushman Bharat scheme to offer secondary and tertiary hospitalisation services to over 10 crore people from the marginalised sections pan India.

Signature - A Collaborative Space for Movement will be hosting Pipe Dreams, an abstract movement theatre performance at Alliance Française of Madras today at 7 pm.

Directed by Vikas Rao, the play travels through the trials and tribulations faced by a family of four, as the story unfolds through the eyes of a teenager who is riddled by questions.

Between moderate and satisfactory: Air Quality Index of Chennai

The Tamil Nadu Pollution Control Board (TNPCB) released the annual pollution report of Chennai recently, where it described the city's Air Quality Index (AQI) to be between moderate and satisfactory. It recorded AQI to be moderate on the days when the air quality levels were between 101 and 200 micrograms and satisfactory when it was between 51 and 100 micrograms.

The report showed that the average values of sulphur dioxide and nitrogen dioxide were within presribed standards, while the particulate matter in the air below 10 microns in size had high values in certain areas due to vehicular movement. The report also indicated that pollution levels in the city were on the rise when compared to previous years.

The Thiruvananthapuram division of the Southern Railway has announced that the timimgs of the AC Biweekly Express from Thiruvananthapuram Central to Puratchi Thalaivar Dr. M G Ramachandran Chennai Central Station have been permanently changed, with effect from July 1, 2019 due to operational reasons.

I wish my good friend @RahulGandhi a very happy birthday.

I wish you many more years of public service.

The Greater Chennai Traffic Police have managed to normalise traffic flow on Mount Road, from Little Mount to Saidapet, which was held up in traffic snarls in the morning. Commuters to Saidapet via Mount Road can now travel along the stretch with ease.

Workers from the Dravida Munnetra Kazhagam (DMK) held protests in front of the Coimbatore City Corporation Office today to demand a solution for the water crisis.

Meanwhile, D Jayakumar, the Tamil Nadu Minister for Fisheries and Personnel and Administrative reforms addressed the media and said, "Water management is a crucial subject. We are doing maximum what we can do. Even after deficit rain, we are trying hard to provide water. Over 400 water tanks are distributing water in the city. At this time, playing politics is wrong."

Actor Shruti Haasan has boarded the cast of USA Network’s upcoming series Treadstone, which will be based in the Jason Bourne universe. She will portray Nira Patel, a young woman in Delhi whose waitress job serves as a cover for a dangerous double life as a trained assassin.  The studio had ordered a pilot for the series in April this year and later greenlit the project in August, reported Deadline. 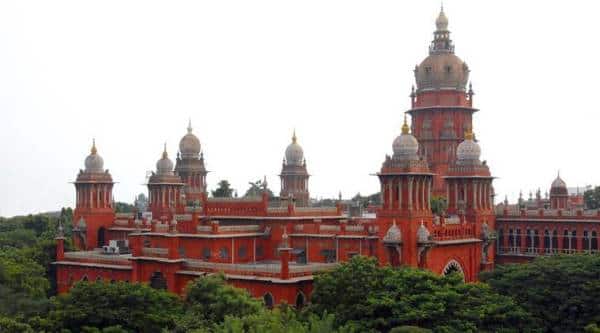 The Madras High Court pulled up the Tamil Nadu government on Tuesday for not taking adequate steps to tackle the water crisis in Chennai despite having faced two failed monsoons.

Read - The court observed that some of the water bodies have been destroyed or reduced in size due to encroachment.

While the government explained steps they had taken up to handle the water crisis and the progress in new desalination projects, besides steps taken with regard to encroachments, the court suo moto impleaded the secretary of Public Works Department (PWD) in the case and directed to submit a state-wide comprehensive report on the number of reservoirs in the state, steps taken for desilting, amount sanctioned, and status of those works.

Meanwhile, the Madras HC on Tuesday denied permission to conduct the Nadigar Sangam Elections at M.G.R Janaki College of Arts and Science for Women in Chennai on Sunday, as it may cause disruption to the public. The HC directed the Nadigar Sangam to suggest a different venue to conduct its election, which is scheduled to take place on June 23.